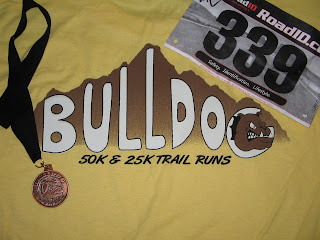 There were several attractions for entering this race; first location; Malibu Creek State Park is only two exits on the freeway from where I live; all in all about an 8 minute drive and second; it would give me a good benchmark as to where my fitness level had sunk to over the summer. Despite being sold out several weeks ago this race for me only ever had two competitors: my watch and the heat. Pulling into parking lot the cloud was low, damp and cool, I hoped it would remain our companion for the morning but it was soon to dissipate leaving clear blues skies and sharp crisp shadows.

I picked up my number and goodie bag and saw Mieko from TRC who was on volunteer duty she said hi and wished me good luck. I went through my usual stretches and wandered over the start line. I had ummed and ahhed about wearing arm warmers; I decided against, a good choice as it turned out. The pre race brief was given; the usual about trail markers etc and with a ready-steady-go we were off.

The first miles took us along the side of a dried out creek bed and then along the appropriately named Crags Road, so called due its “cragginess”, basically a it’s a dry river bed complete with the prerequisite jagged rocks at every turn, beaten down over the years into a trail but pretty gnarly at best. We exited this section and ran passed the old MASH site, this is where they filmed the original series and there are a couple of long abandoned vehicles. A left turn started us on the climb and after a short section I passed the first aid station only stopping to be "spritzed". As previously mentioned the route is basically along-up-along-down-along, 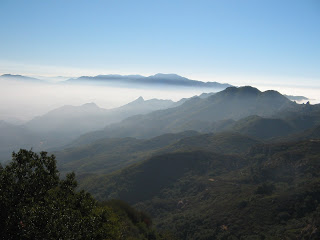 so this climb was going to account for at least a 20-25%; at least in distance, significantly more timewise. Based on my goals I could basically run 10, 11 or 12 minute miles. My provisional plan was to push to get ahead of these times for the first four miles, lose time on the climb and the regain it on the rest of the course. Working on the best case scenario at the forty minute mark I was slightly ahead, at the fifty half a mile behind and at the hour over a mile and half, in fact the sixth mile taking a torturous 19 minutes with a 750’ elevation gain. In short change the climb was just brutal, the sun had come through around mile three, there was little shade and even less of a breeze and did I say the climb was tough! Finally at the six mile mark I reached to the top in a pedestrian 1:14. 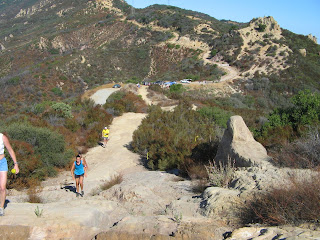 The next mile was a quick downhill to the second aid station, a quick sponge down to cool off and I was on my way. After a short, sharp rocky climb up-and-over we were treated to a section of what by comparison could be called flat followed by another short hill that lasted a half mile or so, this was the prelude the long down hill that would take us back to the canyon floor. At this point we had been running westwards, towards the pacific and had been above the cloud layer, as we dropped down the hill we were treated to cool mists that were blowing through the canyon. Four miles and 1800’ later we were back on the flat. The trail then wound it’s way along the bottom of the valley, there was a quick stream crossing and of course I managed to dunk one foot! The final aid station advised us it was another 2.6 miles and I availed myself of another sponge down and some coke. I was expecting it to be a reasonably level stretch to the finish, ah the bitter taste of disappointment, the final climb took its toll and by mile 14 I was pretty spent. With only a mile left we broke out of the trail and followed the road back towards the original start line. The heat was radiating off the road and runners ahead were suffering as much as I was, one passed me and then pulled up clutching his hamstring with a grimace, cramps I assume. The final turn put us back onto the grass, a girl runner had been tailing me and I could hearing her cranking up her pace so in a final we effort we sprinted, well it was more like a 5k, ok a 10k pace, to the finish line! I made my way through the chute, picked up my medal and headed off for refreshments and a good stretch, never has cold water melon tasted so good! I stretched out and took six Recover-Ease and a bottle of Soy Chocolate Milk. I have got to say that Recover-Ease is the bomb, I spent all day today (Sunday) on my feet at Legoland with about four hours of driving in the car (two there, two back) and have little or no soreness, so that should give you all incentive enough for the "Worth your Weight " as I have six bottles of product from Wicked Fast to give away!

And so for the postmortem: my unofficial time was 2:55:30,“silver” according to my sliding goal scale, however the numbers probably reflect a better result than I deserve. I wanted to get a feel for my base and I did; it’s low probably around the 20-25 miles per week level, so I have some ways to go to get it up to the 60 miles per week range. The heat, as expected, played a big part, I wanted to avoid a repeat of the Valley Crest Half Marathon where I had the cold shakes and while still sailing pretty close to the wind this time I paid close attention to my body tempearture and heart rate easing off when I felt hot or my HR was close to 180 (I actually maxxed out at 191 which really puts to bed the 220 - your age; I am 41 next week!!!). I am not a great runner in the heat and I had pretty much drunk all of my fluids (20oz each of Perpetuem and Amino Vital), I had consumed three Hammer gels and two endurolytes. I was using Polar insulated bottles in my handheld sleeves and they kept things cool almost right to the end. I estimate I was around 10-12 ounces short and so ended a little dehydrated, not really surprising as the temperature in my car said 92 degrees when I got in it to leave; about 20 minutes after I had finished.

The good news is that I do have a baseline from which to improve and I can run this loop as often as I like by simply driving the 8 minutes to get there; I anticipate doing this at the end of each phase so I can look forward to at another two laps round. Up next month is 18k around Point Mugu, I ran this last year and know exactly what to expect, it was in fact my first trail race!. And so I embark on a 7 week period of base building which will get me to around the 60 mile range follow by 6 weeks of speed and hill work followed by ten days of taper after which I’ll be toeing the line at .

Here’s the Forerunner data and some not so great photos.

Thankyou everyone for your early congrats. Finally a big good luck to Alex and Susie - Team Perky, who are running the Trans Rockies Race this week...now that's a hell of a run!