I first came across the Rock Cobbler at the end of 2015 I was looking for some early in the season beat up races to get me ready for my A race; Dirty Kanza 200. It was a local race and it was described as stupidly hard. This seemed like a great event to cut my teeth on for the year and it would be my first ever “gravel” event. What I hadn’t realized at the time was that I had lucked into one of the most unique cycling events in California. I feel very fortunate to have gotten in relatively close to the ground floor, this past weekend I completed the 4.0 version, so now I can say I have ridden 50% of them! It’s something that’s going to be on the calendar for years to come. You can read about 2015’s madness here. So with 2017 being having a distinct gravel emphasis it was without pause that I signed up for this year’s race. I had in mind that I “kinda” knew what to expect but each year the course changes and this year would have the added challenges created as a result of California actually having a winter. We have gone from a state suffering from 5 years or drought to one with more water than we know what to do with! This time last year 61% of the state was classified as being in extreme drought, as of writing this that number has reduced to less than 1%. Most of the rain that has reduced this number has fallen in the last two months. With this in mind it was safe to stay that the conditions would be very different from last year.

Additionally, this year Becca would be trying her hand at the event too, you can read her report here. We had agreed ahead of time to ride our own race, this took the pressure off both of us. Of course, we still both spent many miles thinking about what was happening to each other. You can read about her day here.

So with all that said on with the race report. The route had been release about 10 days earlier and as expected it had its fair share of up and downs. 85 miles-ish with 8000-ish’ of gain was on the docket, this excluded the 4 mile roll back to Lengthwise Brewery which was actually the starting point. I was also planning on making this my fourth UCMA ride and would need to add a few extra miles to round up to over the 90 mark which is the minimum distance that they will consider for qualification.

The night before we made our way out to Bakersfield, conditions looked downright miserable as we drove on the I5 and over the grapevine, thick, low, wet cloud covered and I expressed my doubts that the next day’s forecast of cool temperatures but clear skies would come to fruition. We made our way to Lengthwise Brewery and checked it. I have mentioned it in the past that the vibe is very reminiscent of the Ultra Running one, folks are friendly and laid back, they take the event seriously but less so themselves. It’s generally a very warm and welcoming atmosphere.

A few brews and dinner later in we bumped into some new friends made at the BWR Camp and chatted with them before heading off to our hotel.

The next morning, we were back at the Brewery for breakfast which was laid on for us. Seriously with the organized dinner the night before, breakfast and the post-race meal we picked up three square meals with our race entry.

I could spend the next 1000 words giving you a blow by blow account of the event, the course and terrain! Given that it changes every year doing that serves no real purpose and it ends up reading like a 5th graders “Back to School after the Summer Essay”, dull to read and dull to write! So here is the cliff note version that is pretty applicable in terms of a report and providing some guidance for everyone thinking about 2018’s race;

Elevation: From experience, nearly half of the race is either uphill or downhill, in total there is about 40 miles of flat, 30 miles of this is on the roll out and roll back along the bike path and the rest connects various off road sections. Grades vary across the board anything from an easy spin up to a OMG are you kidding me?! Gear up accordingly!

Terrain: Most the race is off road. This varies from double track, to a tractor path along the side of an orchard, to crossing a river (or two) to an 8” wide muddy goat path on the side of a hill. You could ride a road bike, I wouldn’t suggest it unless you can get decent 28mm+ tires and enough clearance to avoid the mud clog. You could ride a MTB, some folks did, but a cross or gravel bike is the best choice. There are a couple of sections that join the off-road sections and one solid road descent. As mentioned the route changes but from my limited experience the bike path section is a constant.

Wet Feet: Rivers yes, there some and they tend to come without bridges! Last year it was stepping stones to cross, this year it was above my knees and I am 6’1. ZipLoc bags and old shoes are well worth considering. Talking of shoes, Mountain Bike shoes are a must, slippy soled, sexy, road shoes will not be your friend!

Shenanagins; Last year hike-a-bike with push-ups on top. This year they lost the push-ups and added beach-balls! Next year…who knows? I can guarantee there will be some nonsense to contend with! Embrace the craziness!

Assistance; There are enough Aid Stations that you do not need to weigh your bike down with an abundance of food and drink. Use them but don’t linger, get in get filled up and get on your way.
Have an open mind and be prepared to have fun. The event is billed as Ride not a Race, yes there are folks who race it and rightly so but for most people it’s a fun event. Lean into it and enjoy the day!
And with that said roll on Rock Cobbler 5.0 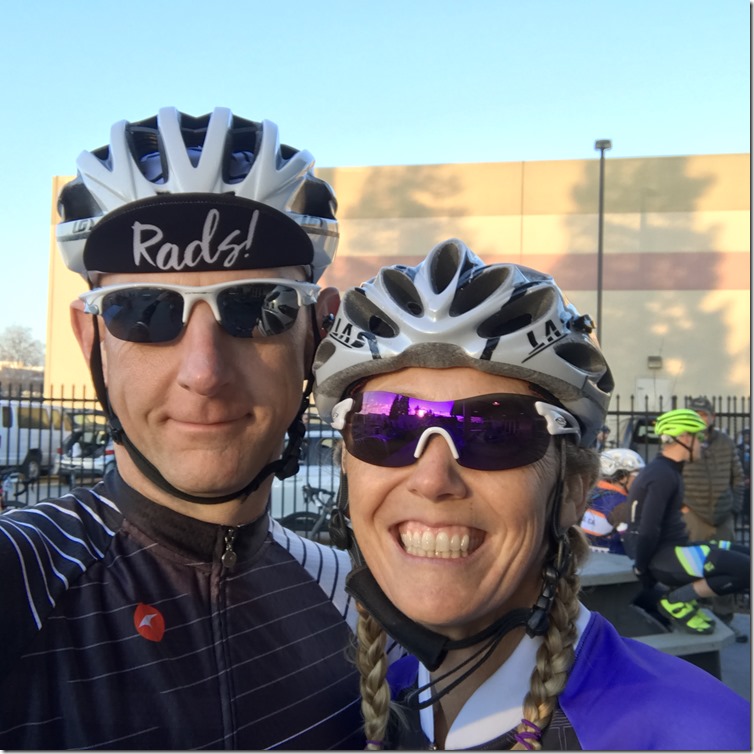 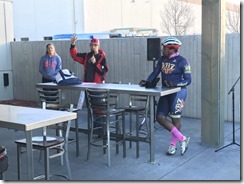 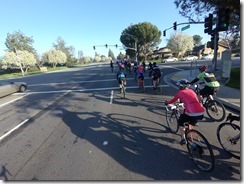 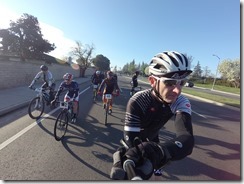 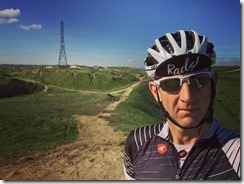 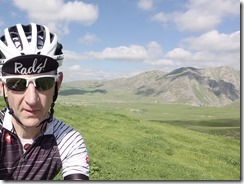 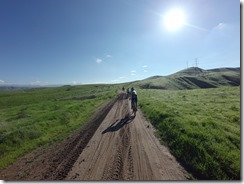 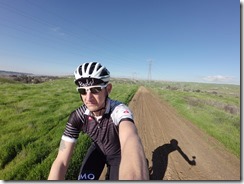 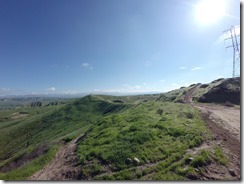 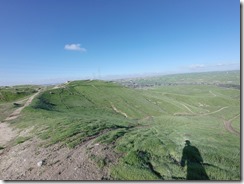 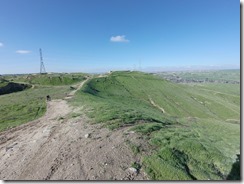 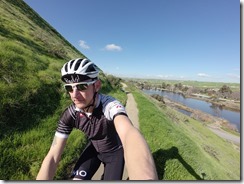 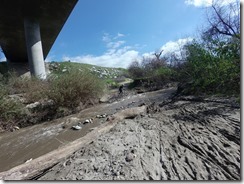 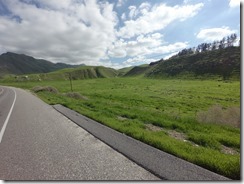 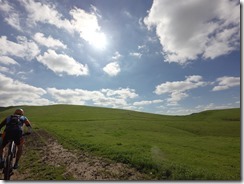 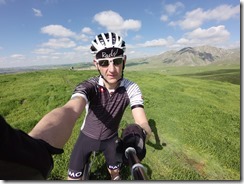 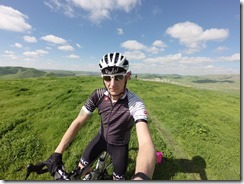 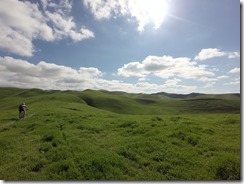 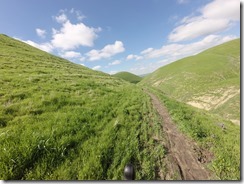 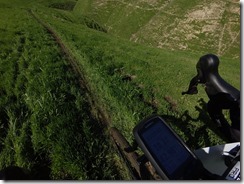 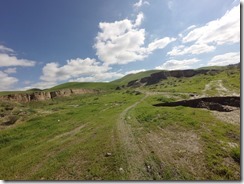 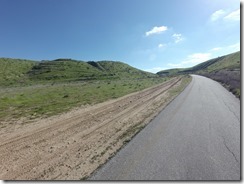 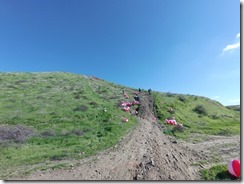 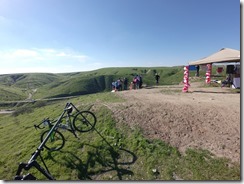 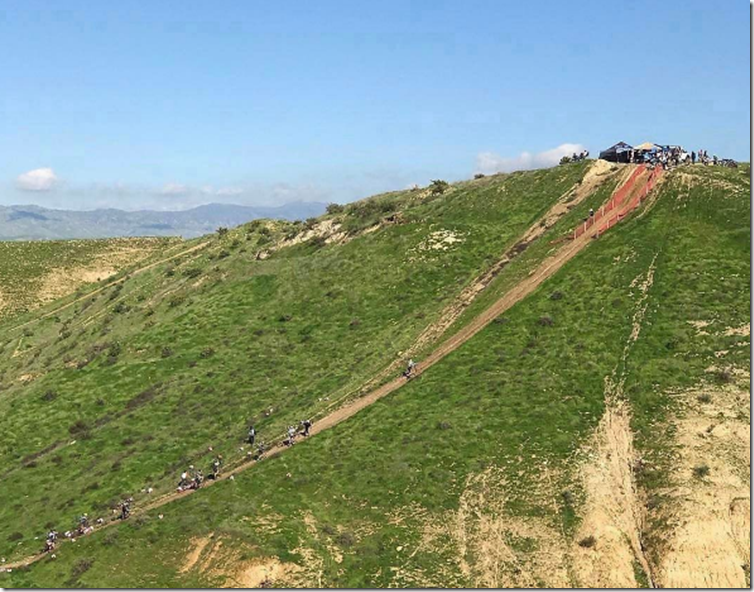