You don’t have to be mad to work here but it sure helps…quite clearly the byline of this endeavor! 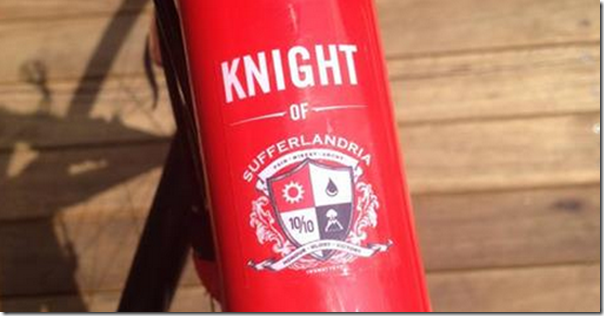 The Sufferlandrian Knighthood, ten back-to-back Sufferfest Videos, any and all are fair game with the exception of the two short ones, The Long Scream and The Extra Shot. There are in fact some very distinct rules that you can read about here.

With that in mind my attempt was schedule for Sunday April 20. Thanks to some super generous folks I had met my goal for my charity Beagles and Buddies, the source of our two mad hounds, Cali and Sprocket. After some thought, but not too much, I had sorted out the order of videos that I would be riding, although this would change during the day, my fuel and fluids had been primed, my tires were pumped, my chain lubed, my technology charged and with that I had a reasonably early night and set my alarm for 6:00am. 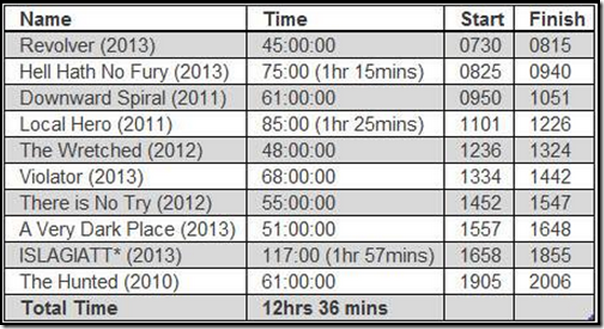 From a technology standpoint my plan was to use my Garmin 500 for each ride on an individual basis and then use my 910xt for a total elapsed time with a 305 as a back-up. I was using Trainer-Road on the screen so I was able to follow a prescribed power requirement.

I’ll spare you the usual morning routine except to say I had a shower and then had pancakes for breakfast. I was on the bike by 7:30am and after a small technical hitch I was underway by 7:35am. The first ride went by fairly uneventfully, I had dialed back my FTP to 75% which meant it was running at 173, based on my recent FTP test where it increase to 230. This I thought was fair as there no expectation that I could complete them all at 100%. 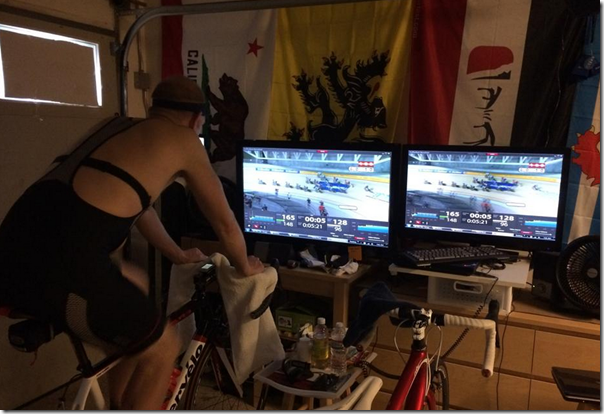 For the second and third rides I was joined by Becca and we rode them together completing the third video with an elapsed time of 3:38 on the clock. After this I was on my own while Becca donned her running shoes and left to finish her training brick. The fourth video finished and I was feeling pretty yucky. I had two fans blowing on my throughout the day but I was working and sweating up a storm as the temperature outside had reached late 70s and it wasn’t much cooler in the garage.

With just over five hours in elapsed time I made a decision to grab a quick shower and with some co-ordination with Becca I jumped off the bike and headed upstairs. A clean bib and with a fresh application of DZ Nuts I was back on the bike and heading into video #5. Fifty minutes later I was done. Off the bike and back on again for number 6 which was duly ridden completing it with seven hours forty five minutes elapsed

These middle videos sucked, the clock had been going by quite quickly during the morning but the afternoon hours dragged on into the early evening. My original planning took another hit as I substituted a shorter ride for the massive ISLIGIATT which lasts just shy of 2 hours. This would mean I would shave an hour off of my expected ride time which by this stage was more than fine by me.

The penultimate video was a mess and I was unable to hit any of the sprint, I basically fell off the peloton and rode alone at the back for an hour. 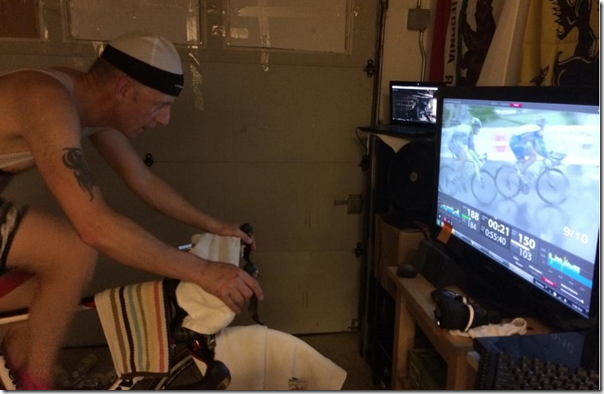 With one video left it was a case of hold the stiff upper lip and leave it all out there…well on the trainer but you know what I mean!

And with that I was done! I more of less fell off my bike got cleaned up and had a curry and beer as well as good rub down with my Bellecore Buffer which did a great job of cleaning all the junk out of my legs. It was clear to see the toll taken as it took several hours after I had dismounted to get my heart rate back down to normal levels and despite consuming liquids throughout the day there was always going to be cardiac drift as the day went on.

With time to reflect on this event I would say that the way to treat it is the same way to treat any long –distance/duration event, in terms of time this took longer than both my 50 mile runs (11-12 hours) but was quicker than my Ironman (13:42) and significantly quicker than my 100 mile run (30:00). You have to have some sense of pacing and that is where the conflict and challenge lies. Each video is a high intensity workout which is designed to put tremendous stress on the body often taking you beyond your FTP level but yet you have ride them and try and stay in Z2 or 3 from a Power and Heart Rate perspective.

In terms of training this is a really hard balance to maintain. I followed the TrainerRoad plan that was a build plan but was obviously not designed for the Knighthood. But it did contain many rides with intervals which gave me a good base and raised my FTP by 15% or so in the 9 weeks. Longer weekend rides also helped as this is just time in the saddle. The obvious difference of course is that an outside ride, has down-hills and changing scenery rather than staring at a TV and pedaling nonstop on a trainer. In the end you just have to focus on one video at a time one interval at a time and know that how deep into the suck you get it will finish!

Here are my thoughts and words of advice for anyone wanting to try this;

Per the mess on the floor; 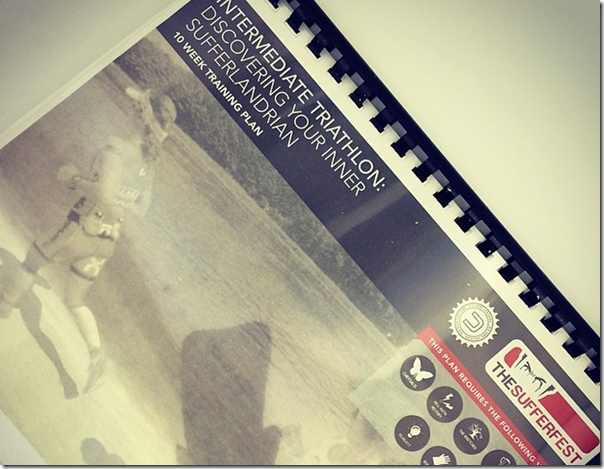 Now onto 6 Hours of Temecula and Vineman!