If you have spent any time on this blog you’ll know that I spend a fair amount of time on my Trainer, dark, early mornings and late nights while the kids are asleep have me creeping off to the garage and spending an hour or two or three gazing at a monitor and leaving teeth-marks on my stem! So when the guys at 3LC (3 Legs Cycling) offered to send me a DVD to review I of course said yes!

The premise of the DVD is that you are coached through a specific set, the disc I was sent focused on climbing. Now I like climbing in fact I would rather go up a mountain than down one, at least for now, so I was intrigued with what they could send me that would instill that grind factor.

“It’s no big secret...climbing is tough - but we’re here to help. Join Team Sky’s British and European track champion Peter Kennaugh, Steve “the Pocket Rocket” Joughin, and a crew of local Manx riders as they dig deep for the hilltop finish. Keep up and you’ll be dancing on the pedals in no time”. 3LC Climbing will help you:

So how was it you ask, well here you go…

After a warm up, including a quick sprint, you are led through three climbs; a gradual big one, shorter smaller one and a short steep one. RPE and cadence are used as the measures and not just gear changes, in fact during the intervals you are only asked to change gear twice during the last minute and the big push over the top. The use of cadence increases the intensity but it also allows for some flexibility, cadence can be reached in any gear so if you have had a long day at work you can still feel like you had a decent session rather than a disappointing one because you could not reach the right Power or HR output. That being said for this review I set up Trainer Road for a 60 minute free ride session so you could measure my output compared to my current FTP setting of 250. As you can see I was north of that for a fair amount of time. I wasn’t quite hitting the cadence cues and was probably pushing a gear too high, something to remember next time. I also had my Garmin EDGE 500 to measure and record cadence and HR. #datageek

The actual session left me gasping for air, it’s not easy, or at least I did not make it easy, while each climb is relatively short (5-7 minutes each) they are intense and you are winding up the intensity every couple of minutes, as mentioned each is slightly different and that adds some nice variety and a different challenge each time…but as you would expect there is no mercy! 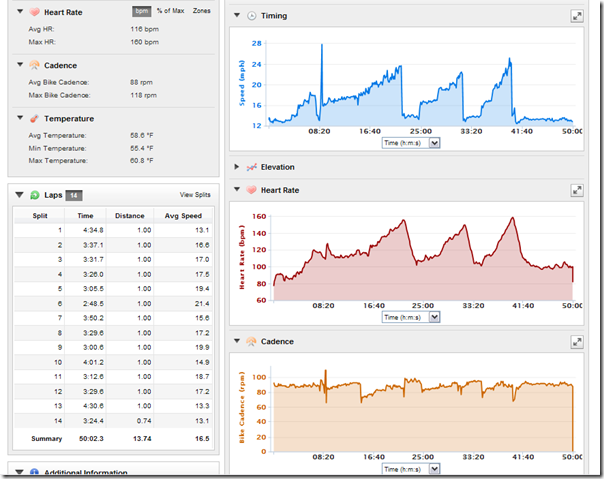 I will be honest and say that based on my experience with the Spinervals DVD watching people on bikes in a room did not appeal, that being said I was pleasantly surprised as not only do you get the dulcet tones of Peter Kennaugh Snr calling out the changes which is akin to actually having a coach in the room with you. In addition there is a pretty slick on screen interface which tells you what you should be doing and what is coming next in case you get lost. You also get some pretty quick wit and banter from the folks on the bikes, these include the likes of Peter Kennaugh (Team Sky) ex Pro Rob Holden (Banana-Falcon) and from Steve Joughin, the original Manx Missile two time winner of British professional road race title who encourages the rides to visualize a climb that they are riding as they move through the training session.

It made an interesting change not to have a music sound track too, although while that can be motivating it’s probably good practice for me to train without that musical crutch given that for racing Tris iPods are banned.

Another nice touch is the inclusion of some stretching sessions on the DVD which, let’s face it, we all need, and are cycling specific which is a bonus. Here is there promo video which includes World Champion Mark Cavandish.

The DVD is priced at GBP24.99 (no the UK/Isle of Man does not have the Euro!), is region free and comes with free shipping worldwide. This may seem a bit steep but I think that there is a lot of value in the actual coaching through the session and the stretching sessions adds some extra value.

Of course too much of anything is a bad thing so I would recommend using this in combination with other Trainer tools (and of course the open road) so you can avoid learning every line off by heart and annoying everyone you know!

This DVD was provided free of charge by the good folks at 3LC. See previous gear reviews in the Reviews Tab above. If you have a product you’d like reviewed, contact me at quadrathon@gmail.com.