This is the local trailhead, it's only half a mile from my front door! And who said LA was all cars and smog, enjoy...

Why do we run long or fast?

Well other than it says to do it in our training program, why do we subject ourselves to runs of hours in length or shuttle sprint sessions that leave us wanting to puke.

I could wax lyrical about these being private times to be alone with my thoughts, time to contemplate and consider but the reality is this is simply not the case. Each time I go farther or faster it pushes back that achievement placeholder it reminds me that I have not reached my best and that there is always something more to achieve, each time I come home thinking I could have gone on or could have been quicker…

When I run I am chased, chased like a cheetah chases down its prey; only today I am the prey. The reality is that it is all about more; distance or speed. Maybe one day I’ll be the cheetah?
Posted by Stuart at 11:42 AM 1 comment:

Email ThisBlogThis!Share to TwitterShare to FacebookShare to Pinterest
Labels: Thoughts about running

Don't you love getting gifts in the mail... 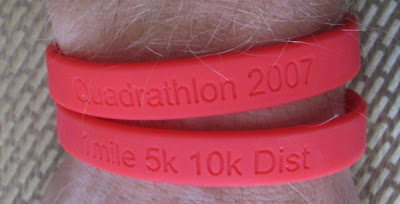 The much awaited Quadrathalon bracelets also known as the 'go-fast' stripes have arrived and they're great. The photo isn't brilliant and doesn't really show the quality if the laser cutting but the detail is nice and sharp. I expect to have a few left over so if any body would like one now is the time to ask.
Note; I have no intention of wearing two, it's just for illustrative purposes.
Posted by Stuart at 4:49 PM No comments:

The Great Race of Augora

6:04 am and I am guided in to the parking lot, ‘ping’ the ice alarm on my dashboard lights up; 36 degrees – wait a minute this is Southern California! The sun rises lighting up the sky in a mass of orange and red tiger stripes. It’s 6.30 am and promises not to be too fierce too early today’s high was forecasted at 81degrees – that’s an expected climb of 45 degrees!

One thousand and one runners line up or rather bunch together in attempt to share communal warmth, a muffled voice over the loudspeaker tells us that the Sheriff who was to give us the safety brief is out catching ‘bad-guys’, 10 seconds to go and then the siren blasts; we surge forward.

A short downhill stretch and everyone is settling into their stride until we reach the second turn and find not only an illegal car parked but also the tow-truck attached to one end of it and the Sheriff’s car; I guess this is one of the bad guys mentioned earlier, essentially creating a roadblock, runners divide and absorb this blockage into its body, we regain our stride and head off towards the next mile marker.

At mile three we enter the Santa Monica Mountains National Recreation Area. Note while the organizers arrange for the runners, the trail is not closed and we have been warned that we could encounter mountain bikers and horseback riders.

The trail winds its way along the side of a dry creek, an exceedingly mild winter has left the track dry and dusty with patches of soft sand and a liberal smattering of exposed rocks and stones waiting and wanting to trip the unsuspecting. At this point the path is about 5 abreast wide so over-taking is possible and runners jockey for position. Around mile 6 we enter a shady wooded area and the path narrows and varies between single file to a tight two abreast, the terrain becomes more rugged as we have to navigate gullies that have been carved by rainwater and criss-cross the path like contour lines on a topographical map, I suck down an energy gel and wash it down with some Amino Vital. Around mile 8 we emerge into the canyon’s centre; a plateau that is surround on all sides by ridgelines one of which we have to navigate. I can immediately feel the heat of the sun on my backs, the shadows are still long; it has only just gone 8.00am, but they are sharp and detailed with zero cloud cover between bodies and the sun. The footing becomes a deep red both rock and sand, the latter of which lures runners into only to find that it is several inches deep in parts just itching to twist your ankle.

I round several bends and see a long snake of runners ahead zig-zagging across the desert terrain…jeez are there really that many people in front of me. My iPod playlist tracks up Another One Bites the Dust by Queen; appropriate enough and I dig a little deeper. Along with the zig-zags we are now running a series of short sharp up and downs which drop you down up to 30’ at anything around a 45 degree angle and then require you run up the same the other side these are liberally smattered with exposed rock etc, the trick seems to be to delicately ‘twinkle toe’ down and then lower your body and extend you pace to cover as much ground in as few as step as possible; this seems to be an effective way to cover the ground and avoid face-planting. 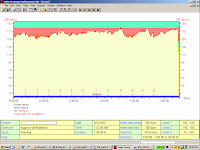 I thank myself for running hill sprints on a treadmill as I glance at my HRM which is merrily humming along in excess of 175 bpm during these short sharp uphills. I round a bend and before me I can see the defined dri-weave snake ahead ascending the final hill, which is, of course, preceded by a downhill slope…nothing like losing all that elevation that you have just worked hard for, this is the highest point on the race for a total elevation gain of 900’.

A lone supporter taking shelter under an equally lone tree claps as I run past and I thank them under my breath and break and smile. I reach the top to face one of the course photographers; now that’s a Kodak moment as my heart explodes out of my chest. This is around mile 9 it’s downhill most of the way back where I encounter several bemused mountain bikers on their way up who either cheer or look with a sense of mild amusement. At mile 10.5 we exit the trail back onto the road, my Nike+ is now telling me that I am at around mile 12 it’s not surprising that its been thrown off, I don’t think I have taken two steps with the same stride length in the last 80 minutes!

The downhill continues and I start to hope for a leveling off; the jarring is starting to wear thin. At this point we encounter the 5k and 10k runners who are being filtered into the running lave, it is all is actually starting to get a little bunched up with walkers, runners, strollers etc I take an outside line and run as close to the cones as I dare against the oncoming traffic sometimes entering the road proper much to the dagger-stares from a local police officer stopping traffic at a cross street intersection. I pass the mile 12 marker I glance down at my HRM and I am on target for a sub 2 hour finish and I am feeling strong, I kick up a notch and extend my stride and churn.

I round a bend and the final uphill faces me, a couple of other half marathoners who I have been playing tag with over the last two or three miles are now rubbing shoulders with me and I know that I have half a mile to go, the final bend reveals a 400m downhill to the finish line and I push a little harder and go a little faster, the last 200m are on the soft grass of Chumash Park and it’s a sprint finish which is over in a blur as from the left somebody hands me a finishers medal and on the right I am directed to have my ChampionChip cut off my shoe and have a bottle of water thrust into my hand.

Sunday 6am the alarm goes off and gingerly set off for a short run to stretch out and shift the toxins around my body some more. As I run along the quite street with only a few cars and the occasional dog walker I think about yesterday’s race, replaying it in my head, where could I have done better, what could I have done different? Standing closer to the start line; pushing harder at the start, increasing my pace, after-all if I can sprint finish I must have not worked hard enough, right? 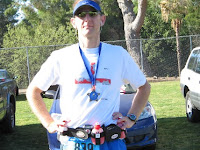 My legs tell me otherwise for the first 3 or so miles this morning, but then they loosen as the blood flows through them and I forget the soreness and start to plan out in my mind the next race, only 42 days away…