ALL or Nothing from Pira Dirtyflows on Vimeo.

Another review of something simple that works, seriously, products like this win every time! This one is from Racer and specifically their Wall Frame. Time to confess I have had this a couple of months, but well you know life and all that!

Anyway Racer Wall Frame is an awesome way of displaying you racing mementos, bibs and photos etc. I could wax lyrical and say that it’s wavy form factor explores the creativity in motion that is depicted in the event or I could say it has a pretty groovy wavy frame and both would be true! Now obviously my most recent big event was Ironman Arizona last November and that’s the one that is on display. For most big city marathon, I have noticed the bibs are huge, my Rock-n-Roll bib from my very first Marathon is approximately twice the size of my IMAZ one, so it does tend to get a little lost in the frame so I simply added my swim cap from race day and this is how it turned out…pretty awesome if I say so myself. The frame is super easy to use, four clips hold the clear plastic on the front and you slide your fingers under them and it pops off, on the back the hole for the hook is in the middle of the frame so you don’t need to worry about it being wonky! In the end I hung mine with some motivational artwork.

So like I said something simple that works and looks good in the process. But I am not the only person to think so, they also won “Best Newcomer Product of the Year” by running industry retailers. Available on line $19.95 check them out and hang some of your bibs or caps with pride!

This frame was provided free of charge by the good folks at RacerFrame. See previous gear reviews in the tab above. If you have a product you’d like reviewed, contact me at quadrathon@gmail.com.

Email ThisBlogThis!Share to TwitterShare to FacebookShare to Pinterest
Labels: Review

It’s always a pleasure to write a review about something that is simple and works and this is one of those occasions! I was very kindly sent some samples of SBR Foggle from a long-time online friend, Robin from Gotta Run who got a bunch from her sponsorship on the Rev3 Team this year.

“Another innovative and exceptional brand brought to you by SBR Sports, Inc. FOGGLE is the only anti-fog towelette that not only defogs, BUT CLEANS the lens at the same time! Tested by numerous athletes, FOGGLE is perfect for swim , snowboarding, and skiing goggles, cycling and running lens, scuba and ski masks! Simply wipe a thin film of FOGGLE onto the inside and outside of the surface then let dry. Three seconds later the FOGGLE solution disappears and you are left with crystal clear vision that will not fog up under the most extreme conditions. Recommendation…reuse the FOGGLE wipe multiple times by keeping it airtight. FOGGLE effectively de-fogs swim goggles, scuba, snowboard and skiing masks, running and cycling lens. Cleans the lens at the same time as defogging. Keeping the wipe airtight, user can yield approximately 5 – 6 applications. Available in individual wipes, a pack of 6, or box of 48.”

Since refining my goggles down to the more svelte Aqua-Sphere-Kayenne last year I did notice that they seemed to mist up around the 1000 yard mark, no matter whether I was in the pool or in open water, although in open water it’s a bit better. In the pool it’s not a drama as with the natural rest periods in a swim set I had time to wipe them, this is obviously not so easy in open water. 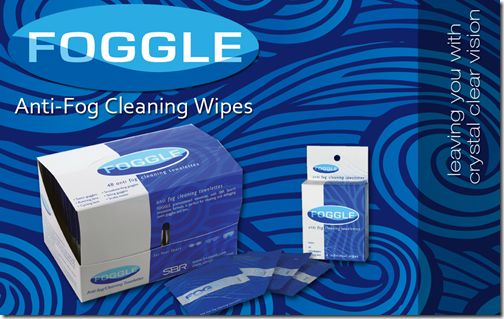 So this week I cracked open the first pack and wiped the inside of the lenses. Monday’s swim was short only 1200 yards but I had no issue, Wednesday’s set went far beyond that and the usual 1000 yard misting, in fact it was a good 75 minutes in the pool for 2800 yards and I didn’t not have to wipe with my fingers once. I wiped them with the Foggle before I started and that was it, no problem, no misting, nothing. As suggested I tucked the opened one into a ZipLoc bag Monday and it was perfectly moist the second time around, SBR the manufacturers suggest that by doing this it is good for 6-8 uses, I guess that depends on how often you swim as well, once a week they may not last that long, three times a week very likely.

So like I said at the beginning a simple product that works is always one of my favorites!

A big thanks to Robin for dipping into her stash for me!

Posted by Stuart at 2:32 AM No comments:

Email ThisBlogThis!Share to TwitterShare to FacebookShare to Pinterest
Labels: Review

It was one year ago this weekend (now 10 days ago) that I finished my first triathlon, ironically I started weak and finished strong, I say ironically as this time around it was a complete reverse.
As mentioned in my last post I managed to pick up some stomach bug. I first noticed at 1am Sunday morning on race day, when I woke feeling hot and nauseous, I put it down to race nerves, drank some water, turned on the AC and went back to bed. The next morning I felt ok, not great but ok. I couldn’t face any food and so I sipped on some water, I couldn’t even face coffee…now that’s a warning sign! The room was hot, I was in Palm Desert which even in March was warm. I went outside and at 6am it was a little cooler than the room and I felt better. A short drive to the race site and after the usual shenanigans of parking and setting up the bike etc I was set. I managed to sip some coffee and my stomach felt settled. I got into my wetsuit and into the water, it was cold but I had made the practice swim the day before and I knew what to expect and so I got wet and cold, especially in my ears and up my nose and water down the back so as to not get a shock. My wave was one of the last to go, so I lined up and with a whoop was in the water.
I had a target of 35-40 minutes for the swim, my sighting was pretty bad and I kept veering off to the right, eventually I could sight on some rocks and that kept me fairly straight. 32:54 minutes later I got out of the water…I was shocked and very happy, with better sighting I could have made sub 30 minutes, I am never going to be fast be was really pleased with the result. I was 52/61
A solid and steady Transition and I was on the bike. The bike course is a bit rough to start but then it’s pancake flat, I was feeling good through to about mile 18 and then my stomach started going south and my speed with it. I still hadn’t eaten anything and was drinking High-5 electrolyte fluids. I hit the 20 mile mark in just over the hour but slowed to finish the bike in 1:15:15 moving up to 45/61, had I maintained my 20mph I would have finished around 35/61 but it was not to be. 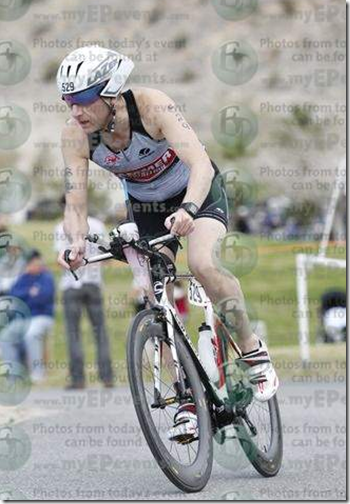 Another unremarkable Transition and I was on the run. Two loops around the lake, the first mile was fine the second a bit slower, by mile three I was throwing in walk breaks, I passed the first loop and felt terrible. To cut a long story short I walked the entire second loop with the exception of the last 100 yards. 6 miles took me 1:21:42…just to remind you my 10k PR is 43:04 on a bad day I can average 50 minutes! I was last in my AG. Overall for the race 59/61 in 3:17:18 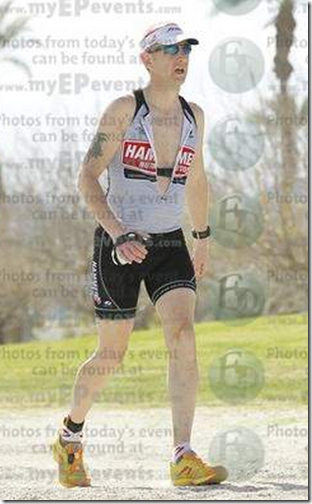 I crossed the finish line and collapsed in some shade which was unfortunately by the podium and they wanted to get on with the awards so I crawled off to find some more shade and was basically rescued by TriBeccaTO who sat me down by a tree and took care of me, packing me up and driving me home. 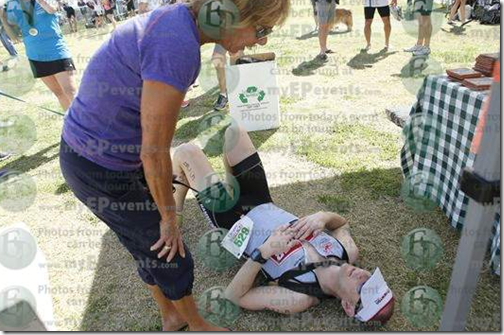 The next three days were spent at home. I lost 8lbs in total although that’s creeping back on!
Despite my thoughts to and some encouragement to quit I am glad I finished, it was a case of mind over matter. I just goes to show that you can drag your sorry self along just for a piece of metal!

Let’s do a quick recap of the missing weeks of IMSG Training; Week 7 Came down with Flu, managed to run, walk and crawl my way through the week! Week 8 Decided to stop training, take 10 days off to clear up the Bronchitis from January and the Flu from February. Week 9 Half a week’s training over the second half of the week, I limped (literally with a niggle in my hip) along as I stopped to cough up my lungs when I ran, I avoided the pool and could feel the fitness start to drain out of me. Week 10 I had an Olympic work up race on the Sunday at the Desert Tri, I picked up a stomach bug that reduced my 10k run to a walk and had me spending Monday, Tuesday and Wednesday at home…but hey I am only one stomach flu from my ideal weight…I lost 8lbs! Week 11 Mostly spent recovering from the Stomach bug. Week 12 (this week) I thought long and hard about St George, which is 8 weeks away, decided to call it and cancelled the hotel reservation…no St George for me. It wasn’t that hard a decision, I’ll spare you all the justification and rationale, if it’s its good by me it should be good by you right! So what’s next, I have a Olympic Tri in June and then that’s it maybe, probably for the year. I have spent the last 5 years racing and when not injured have been on a training plan targeting something. Added to which in a month’s time I am closing on a house and moving so that’s going to take up some time too. I am not moving far and staying local but it does open up some new trails that I have never seen before. I checked the local-est trail last night with TribeccaTO, we didn’t get far due to the failing light but the first mile or so was a bit challenging…1000’ feet of gain, but it looks like we can connect through to some more familiar ones and make a nice loop or out and back. I am also going back to my roots some and one thing that I am looking forward to spending the summer having some fun back on trails on one of these, I mountain biked for years in the UK and did for several more when I moved to the US, I even raced once or twice…yes there will be some Go Pro footage! 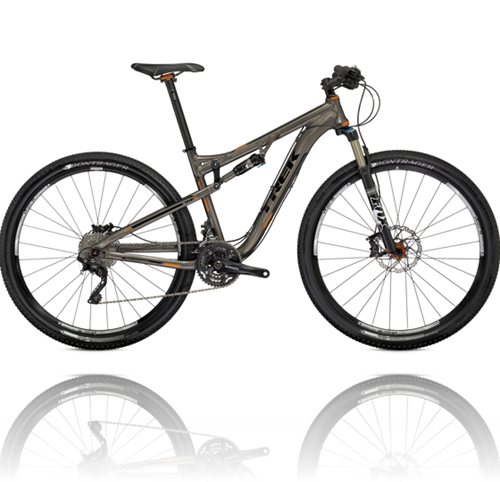