The month got pretty big pretty fast! The nice thing is that the accumulation is driven by the training and not the other way round. Unless you have been hiding under a rock you will know that I am using TrainerRoad for my training. Specifically I have been following the Sweet Spot Base High Volume Plans. I will cover the plans in more detail in a different post. But to summarize (and copy from TR’s website);

“The Sweet-Spot block is the most efficient form of base training for 99% of cyclists — it’s what we recommend. You’ll train in the Sweet-Spot, Threshold and VO2max power zones for a blend of interval training that makes you stronger, faster.”

There have been typically only two diversions away from the plan have been a recovery ride on a Monday which, per the plan, is a rest day. From experience having an easy ride sets up for a better week. Long outdoor rides at the weekend have supplemented the training and given me the opportunity to put into practice some of the training and keep my road skills sharp…well you know it’s all relative. 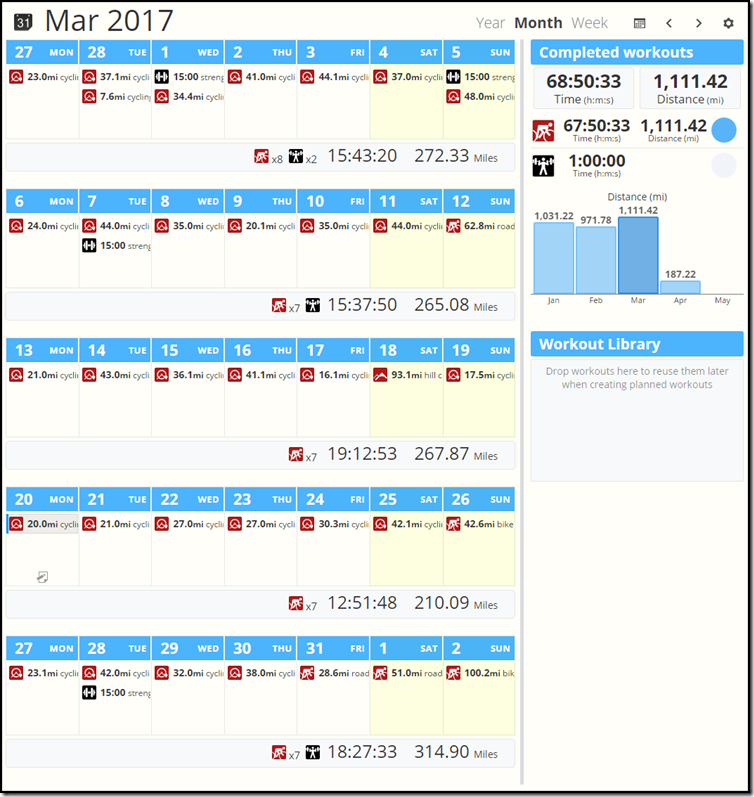 The only event this month was the Redlands Strada Rosso. Turned out (again) to not be the event I planned for. I still need to write up the report and will post that soon…it’s still sinking in!

Coming up in April I have two road events; Mullholland Challenge and the L’Etape so lots of climbing and then some more climbing!

Strength training…yeah still need to work on that!

By today’s standards it’s a dated bike, I like to think of it as a classic! I got it back in October 2010…wow! To be honest it was a cross training tool back then as I was much more focused on running and then triathlon. It was only in the last 3 years that the bike has edged out the running shoes and wetsuit. I have since sold my Tri Bike and wetsuit and a pair of running shoes now lasts six months rather than two! 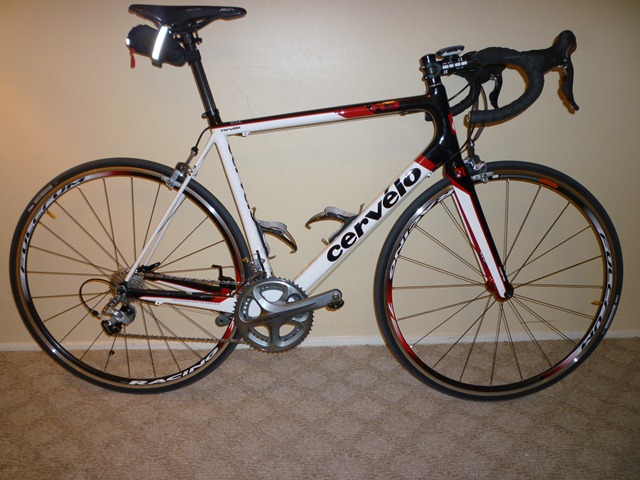 The Cervelo has changed during that time and it’s interesting (at least to me) to see the progressive changes over time. In fact all that really remains is the frame, headset and handlebars! Here is a quick mind dump of things that I can remember.

The bike came with a stock mechanical Shimano Ultegra 10 speed Groupset in time I added a Stages Power Meter. The bike obviously came without pedals and so I installed SpeedPlays. When Garmin sent me a Vector2 Pedalset/Power meter I converted over and removed the Stages. Eventually I upgraded the entire Groupset and now it’s running a mechanical DuraAce 9000 11 speed with a 34/50 and 11/30 gearing. Plenty of teeth for climbing!

The original wheelset were stock Fulcrum Racing 7, these got changed to Fulcrum Racing Quatros and since then upgraded to either DuraAce9000 C-24s for climbing or 3T OrbisII 50mm deep wheels for the flat stuff. I used to ride Scwable UltremoZX 23mm tires, this changed to Scwable OnePro 25mm tires in time. More recently I have ordered a pair of Clement Strada LGG 25mm tires as the OnePros need replacing. I have become a fan of Clement tires since using them for Dirty Kanza and all my other gravel rides and also for CX racing last season.

The bike came with a zero setback 3TCycling seat-post, which was immediately changed for a 25 setback post. That post cracked a year ago and so it was replaced.

While these are small changes in themselves the biggest change has been to my position. I started with a 3TCycling 90mm Arx stem. I am riding the same make and model stem but it is now a 120mm and I am thinking of pushing that out to 130mm. After 7 years I finally got the steerer trimmed too!

The stock Fizik saddle was 86d after one ride, I gutted it out with a Selle Italia one that matched the frame but not my ass for another couple of years until finally converting over to an ISM Prologue. In fact all my bikes have this saddle. Good enough for 227 miles and 29,000’ of climbing!

It still has the original Serfas bottle cages that I mounted

The Garmin mount has been replaced with a Cycliq DuoMount. 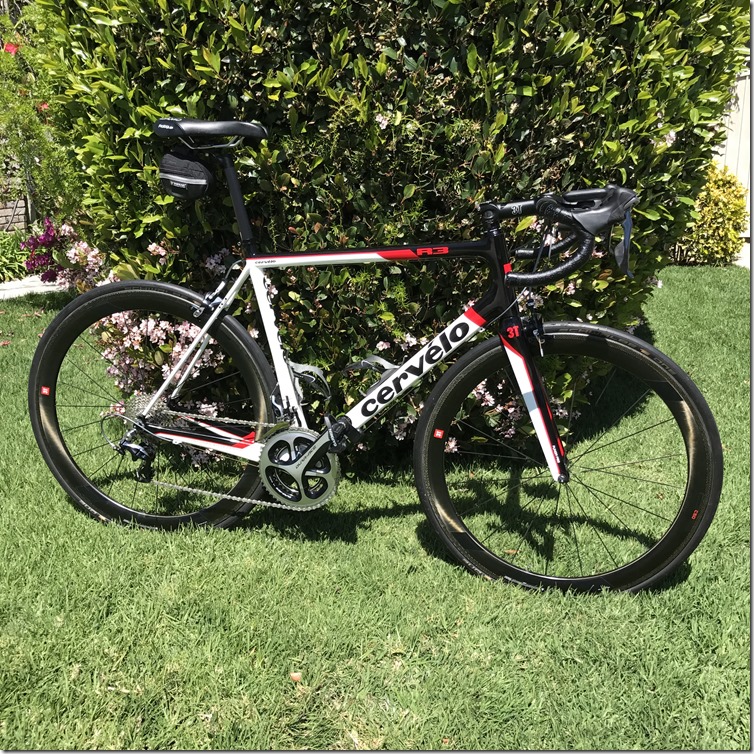 I hesitate to put this down here and it will probably jinx me but I have managed to never crash it and it actually only has a couple of minor blemishes in the clear coat!

I am constantly on the lookout for something new and alas I cannot afford my dream frame, a Cervelo RCA which is won’t see any change out of $10,000 for the frame and fork alone!

Whatever I find it’s got a lot to live up to!

Posted by Stuart at 1:15 PM No comments:

You may have noticed that there is a distinct lack of posts this month. To be honest finding time to write between work, family and riding is becoming quite challenging. So, in an effort to make the content more interesting I am going to cease writing about the weekly training. I keep notes within Strava so if you really want to know what my training looks like and what’s going on you can find me there and follow along.

After over 10 years of writing it’s sometimes hard to get the creative juices flowing. Without the usual blathering’s about training you can expect the posts to fall broadly into 3 categories; Race Reports, Reviews and Special Items. This is much more interesting that reading about over-unders, sweet spot zones and so on.

As always, thanks for reading!

Posted by Stuart at 9:31 PM No comments: