I have been a bit absent on the interwebs in the last month so this race report is coming before I have had a chance to write up my trip to Tempe and a couple of reviews but as it is fresh in my failing mind…well you know!

This was to be my second ever Triathlon and to be honest after a disastrous swim at the Desert Tri in March when I stood on the sand with 30 seconds to my wave went on Sunday morning to say I was a little nervous was an understatement. Added to which was the distance of the swim 1500m (1640 yards or 0.93 of a mile) would be longest swim without any toys, (pull buoy etc), my longest open water swim ever (and only my third OWS) and the first swim in a new wet suit…so yeah about that nothing new on race day thing!

I got to the start in plenty of time, I had dropped my shoes and visor at T2 the day before, and set up my bike, it really didn’t take that long as most of the stuff I had done the night before. So with an hour to go I headed to the water to get wet and acclimatized to the temperature etc. I was very pleased that the water was pleasantly not cold, almost warm and with a wet suit it was perfect, most people were wearing wetsuits although there were a few hardy souls not bothering.

I waded out and swam out and up and down, there was no one in the water except me and that was fine. After a while other racers arrived and we made nervous conversation with each other as we “warmed up”. The water was clear and there was a sharp drop off once you got to the “beach swim line” bouys which was a little off putting but I tried to stay well within myself and focus on the space I was occupying only and really not worry about anything else. I felt based on all the time in the pool that the first couple of hundred yards would seem dreadful but once I got into a groove I could just keep going.

I stayed in as long as I could, try to get used to the water, making sure I got it down the back of my suit so as not to get a nasty shock later and playing with the floatation of the new suit. Finally I waded out as we got the brief of the course, fuck those buoys looked a long way off I kept thinking!

Finally the first three waves went and it was my time to stand in the lapping waters. With an airhorn we were off and I waded back out till I was up to between my waist and chest, I floated up and was off. For the first 10 or so stokes I sighted and then I hit my my 4:1 pattern and was off (I prolly need to work on the bilateral thing but one thing at a time). I wasn’t too worried about ongoing sighting as I figured that as long as I could see someone or better still more than one person on my right I would be ok. The course was a clockwise square with a left turn at the end. I will spare you a stoke by stroke account but my line was fine and I managed to get away with very little contact. In reality I was actually pretty comfortable, the suit worked really well. I was overtaken a bit and then overtook some others, a few who even had caps from earlier waves.

I made the second turn and was surprised how quickly I got there, without wanting to get ahead of myself I just kept moving towards the big red buoy on the distance. On thing that had happened right from the very start was one lens was leaking, by around the 1200 meter mark I decided to empty it and broke into a breast stroke and rolled onto my back. My right hamstring teetered on the edge of cramping and I made an effort to relax it off, (stretching it for me only makes it worse), with some of the water gone I continued. It was a bit of a bun fight at the end and the last 200 meters took forever. I missed the turn and went past the buoy then over compensated as was outside of the buoys to the left of the exit boat ramp. Eventually I could see sand then the ramp and then my fingers could feel the bottom and I was done…I was so happy! 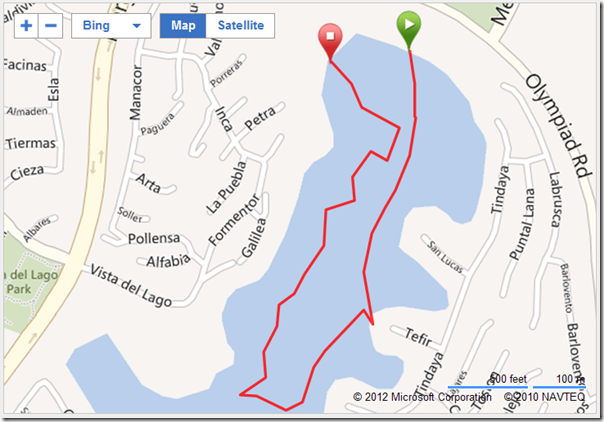 I ran out towards T1 and instantly misshit my Garmin effing up the data for the whole day but I didn’t care. I pulled off my wetsuit and to my joy it slipped off easily, so much better than in March when I had sat on the floor and wrestled with it for 5 minutes. Bike kit on a short run out of T1 and I was on my way. 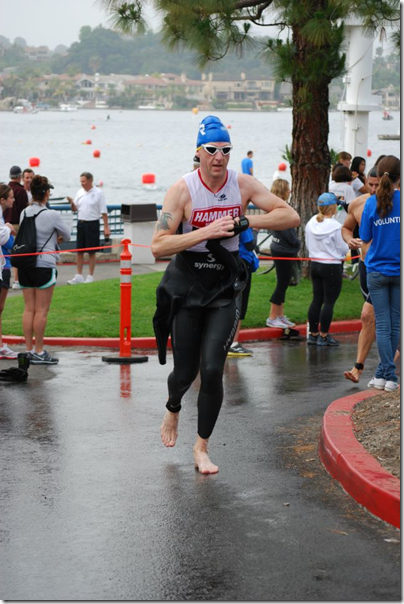 I’ll be honest that my focus had been so much on the swim that I hadn’t thought about the bike at all and I was expecting (for no real reason) a flat course, oops! Here’s the profile, yeah about that flat!

That being said my biking is pretty good and this year I have racked up close to 2000 miles already. I was pleased that there was some climbing to be honest as I like it. So I dug in and started passing people, a lot of people. In fact I was overtaken on the bike only three times and each one I caught back up to, of course with the ups come the downs and most all my hesitancy I have about descending at speed disappears on race day, I topped out at 37 mph, which is pretty respectable. 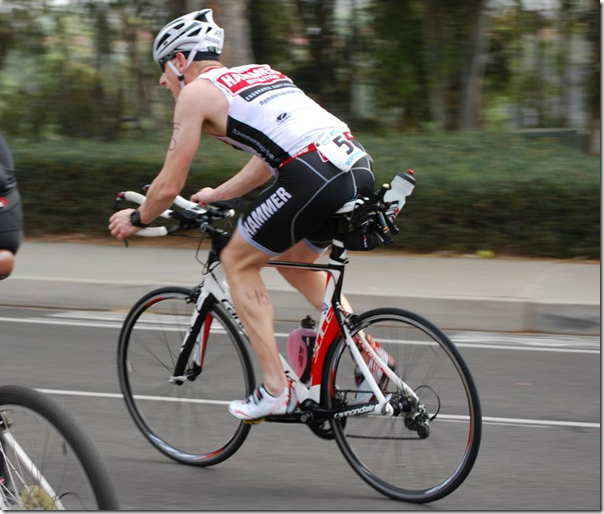 The nothing new on race day continued as I flew into T2 with my feet out of my shoes for a flying dismount, I almost nailed it but my feet are pretty big and my shoes caught the ground so I simply picked up my bike and ran…easy! Socks, running shoes and Visor on and I was off! The first couple of mile clicked by sub 8 minute miles and then the fun began, we were directed into a housing community and with a couple of sharp terms there was a park to cross, a dirt bank to run up and then a horse trail to run along…no really! Then there was the hill, OMFG, it was steep and then a bit steeper. Yeah I walked! I topped out ran down and out of the weirdness onto a road, back up and down and then back up, I walked a bit more, fending off a cramp. At the top I ran and didn’t stop until I finished!

Done!
Official stuff:
Here is all my Garmin Data:
Some after thoughts:
So with 54 days to Vineman 70.3 and 180 days to Ironman Arizona it’s time to get my shit together!

Here are some more photo’s from the day…

Ironman St George; the best fun you can have without racing…

I spent the weekend in St George UT watching the Ironman St George…what an amazing experience! In case you didn’t hear the conditions were crazy, shortly after the AG swim start the winds picked up…this set the tone for the day; winds gusted up to 40 mph. I borrowed this picture below, the top is the ad, the bottom the reality! Hundreds of athletes DNFd the swim or missed the cutoff of 2:20, most were allowed to continue without a chip to at least finish. 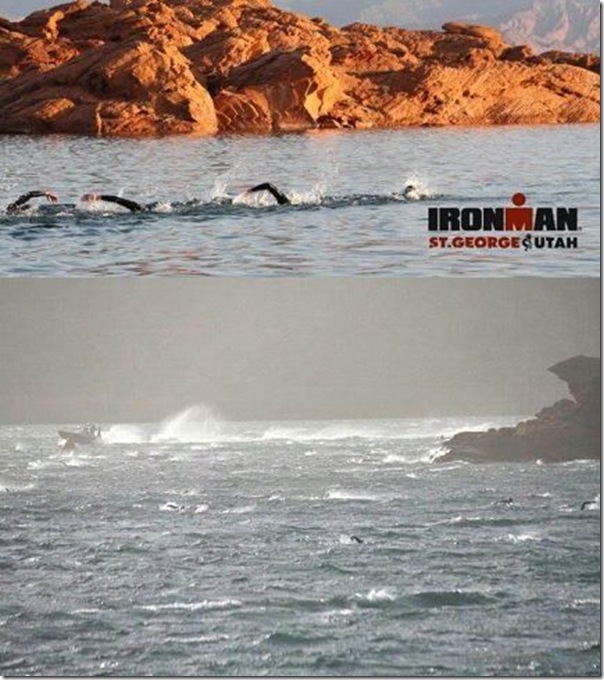 Ben Hoffman won overall in 9:07 the first 9:+ Ironman finish in 110 Ironman races according to “Iron” Mike Reilly, he also said that due to conditions this was the hardest Ironman race in 20 years! Meredith Kessler, the female Champions bike speeds varied from 6-52mph…more people were pulled at the run split cutoff or missed the 5:30pm cut time! The run by comparison was easier although for many age groupers the late heat was troublesome with temperatures in the upper 80s early 90s! There were still plenty of runners on the course at Midnight.

I stayed in the finish chute almost to Midnight, having been at the swim to see the Pros go at 7am, it was a long day for me and an excruciatingly long one for the competitors. For me it was really magical, the excitement, energy and atmosphere were beyond what I could have ever imagined, I have watched them on TV but to be there in person cheering people on was an amazing experience and one I highly recommend! 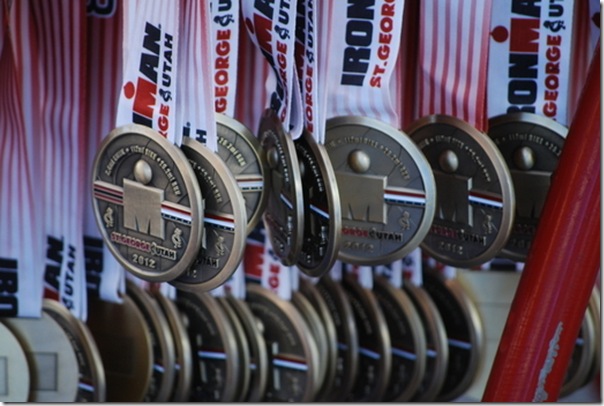 I took a ton of photos here are a few…

This weekend I am heading out to Phoenix to check out my Ironman race course!

Email ThisBlogThis!Share to TwitterShare to FacebookShare to Pinterest
Labels: IronMan

The truth is that April has been an up and down month, some big changes including moving house which I am sure you all know is a royal pain in the a$$. I have been training and logging the sessions although I have backed off over the last couple of weeks as I felt I really was not seeing any benefits or gains and that is a clear indicator of overtraining. I was heading for a 600 mile month and in the end easing off the at the end of the month meant I still came in with 534 miles which is still my biggest month this year and second biggest in the last 12, it breaks down as follows

Total training time 52:01, looking back over the first four months or this year one of my goals was consistency and I am pleased that I have been able to do that, overtraining not withstanding! 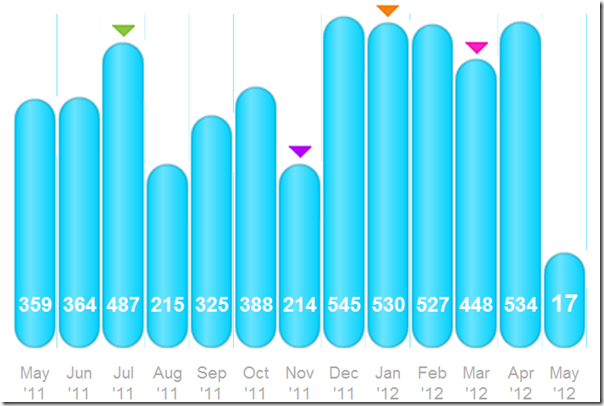 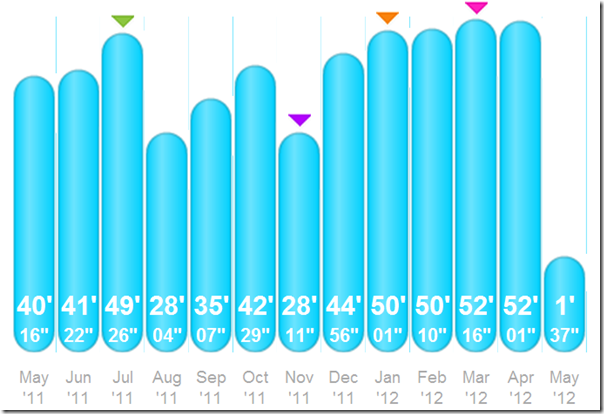 Other noticeable milestones are that I passed the 100,000 yard mark in the pool for the year…that’s 56 almost 57 miles! And if I include December that’s nearly 70 miles! OMFG!

For the year I breezed through the 2000 mile mark too, which is good and bad.

I finally rounded out my upgrades for my bike thanks to a friend in England who secured me the new bars…more on this to follow.

This month is pretty crazy too, right now I am in St George UT here to watch and cheer on some friends doing IM St George tomorrow, next weekend I am in Phoenix riding and running on the Ironman Arizona course with a Daily Mile buddy and the following weekend I have my first Olympic distance triathlon and my second triathlon ever! 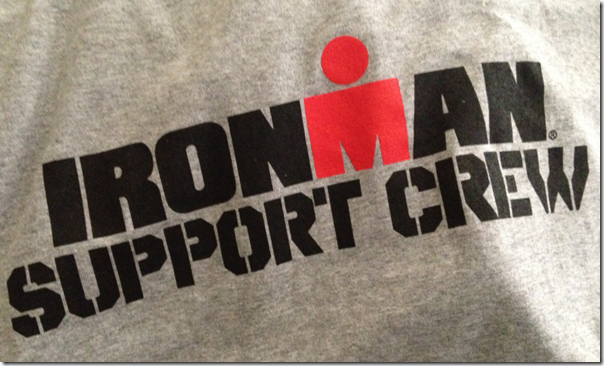 So lots of fun stuff coming up and hopefully now the dust has settled from the packing boxes I can spend a little time writing about them and catching up with what you are all doing!
Posted by Stuart at 1:20 PM 2 comments: