Review; The Sufferfest ISLAGIATT (It Seemed Like a Good Idea at the Time)

I have written a few reviews of Sufferfest Videos since I started using them back in January 2010! Yes I was an early adopter, you can read them here. This is a review or one of the more recent; ISLAGIATT (It Seemed Like a Good Idea at the Time).

As a reminder The Sufferfest video recipe is;

ISLAGIATT mixes these all up of these and the end result is to have you well and truly done to perfection! A superb storyline will have fighting over the hills with five other riders as you vie for the title of Most Aggressive Rider. #shocker

Coming in at just under 2 hours (1:56 to be precise) it’s the longest Sufferfest to date by over 30 minutes, a record previously held by Local Hero (1:25). It features footage form the 2013 Giro d’Italia, you know the one with the snow!

This ride is four climbs. After 15 minutes warming up you have a 15 minute climb, a short rest and you get to go do another 20 minute climb followed by another short recovery, this gets you to the half-way point time-wise and so you think it must be downhill from here (insert evil laugh)…it ain’t! Another 20 minutes of climbing followed by a short recovery and then the last climb of 8 minutes. In case you lost count that 1:03 of climbing! There’s no coasting to the end as you have a fast flat finish for the last 7:30 followed by a nice cool down, during which you can reattach your legs and regain your composure.

Over the last 3 years there have been a lot of changes in the presentation of the Sufferfest videos, by far the most noticeably is the quality of the actual video which are now in HD, the earliest video’s by comparison look like Super8! The only downside is if you are using these on a portable device (iPad, iPhone etc) is the file size the entire library is not at around 25GBs and ISLAGIATT is 3GB+ of course you could splash for the 64 GB device but I prefer to spend my $$$ on bike parts so these are all loaded onto an old pc in the Pain Cave! 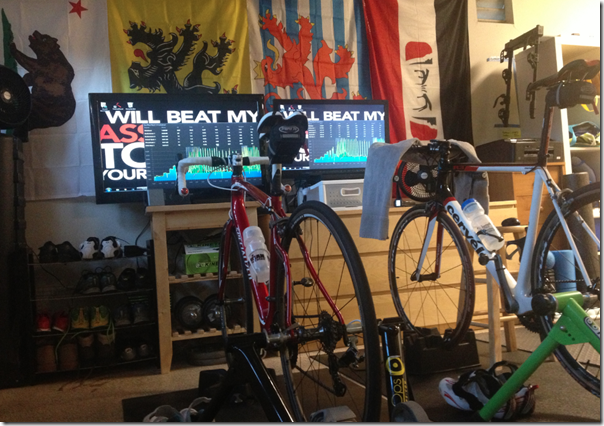 On the soundtrack there are variations across the existing ‘fest library which vary from Thrash to Indie Rock to out and out Trance music and this one falls across the latter (the last two) of these styles with a smattering of easy listening (on the ears not the Tony Bennett variety) during the rest intervals, it works for me as there is a nice correlation between BPM and RPM especially at those standing intervals

All in all this is definitely one of the best Videos, none of them are bad but this is one I see myself reaching for (not retching at) in the future. For those Data Geeks out there here are the output files from TrainerRoad and Garmin Connect as well as the trailer! 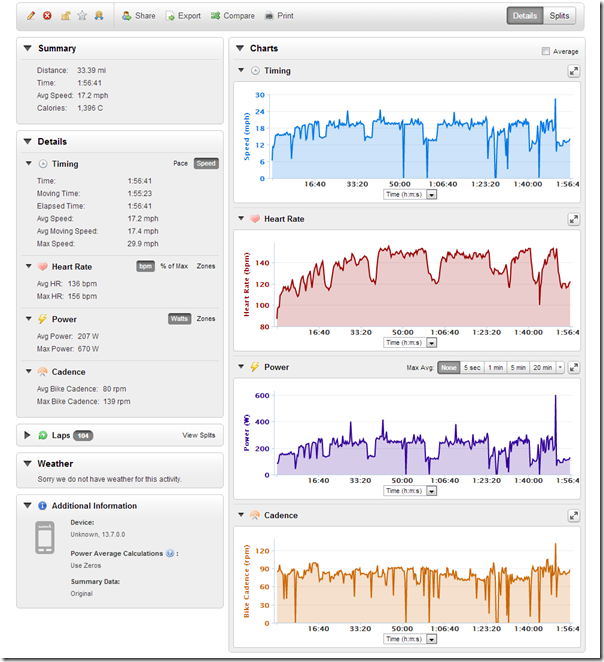 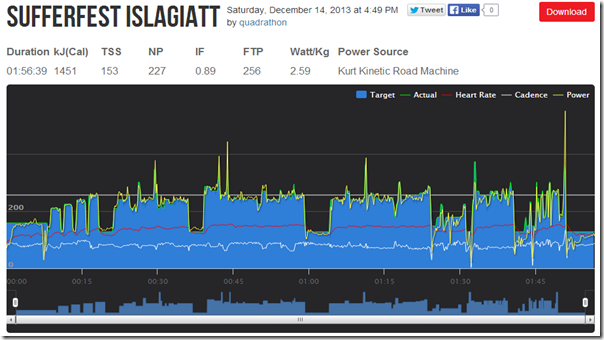 Yours for less than the price for two Venti Lattes what would you sooner have coursing through your veins!

PS if you like the soundtracks you can listen to them using Spotify here!

Posted by Stuart at 3:02 PM No comments:

Email ThisBlogThis!Share to TwitterShare to FacebookShare to Pinterest
Labels: Bike, Review, The Sufferfest

Still alive and getting stuff done!

Yes I am although I have been a bit busy of late; family, work and training!

Five weeks of training for St George 70.3 is in the bank…mostly, a couple of missed sessions. I have not been so detailed with posting numbers or blogging as you may well have seen in the past so here is a report on it so far; 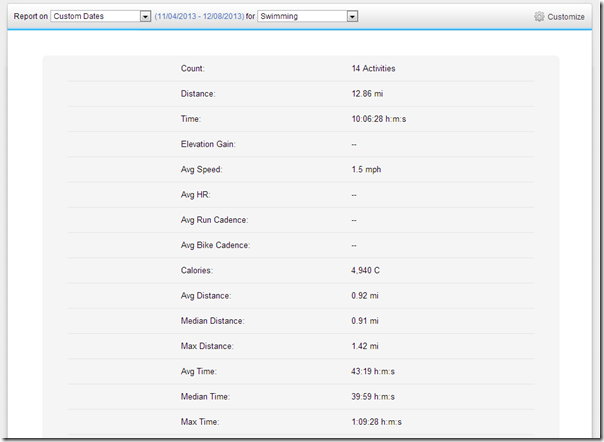 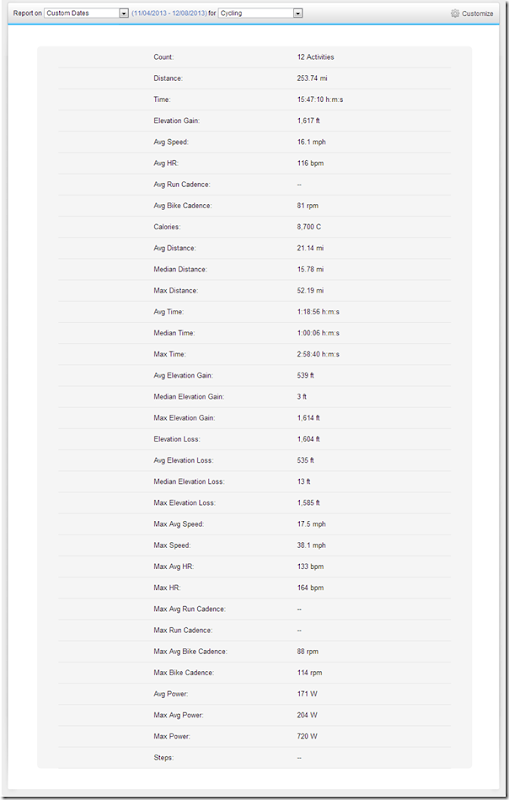 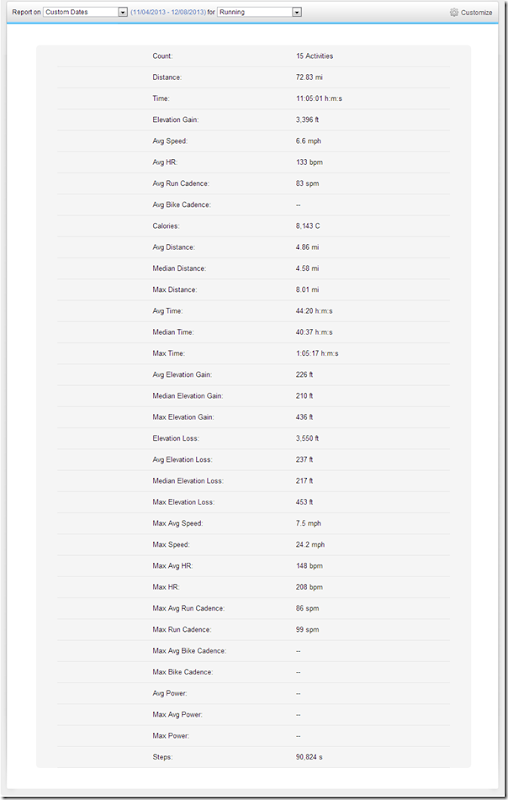 As always consistency is key and so far things are going well. All things considered it’s been a pretty quiet training/racing year but with hindsight that’s been a good thing as I apart from a couple of big injuries I have been at it since 2007. Moving house, remodeling, blending two families (of two boys each) and mostly recently getting engaged and starting to plan a wedding for next year has taken a priority and that’s just fine! Yes in case you missed it I got engaged to the most wonderful and beautiful (and bad ass) TriBeccaTO! 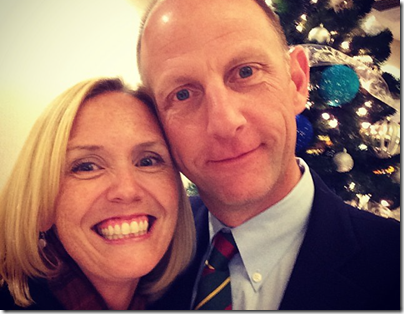