All may not be as it seems! 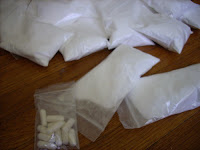 A not to be repeated experience for Rick Gaston while traveling to a race in July. A good lesson for anyone traveling by air to a race and intending to pack in their luggage pre-packed nutrition and hydration powders etc. An extract from the conversation that followed:
2 Officers: We found something in your luggage that we'd like to talk to you about, you have any idea what we're talking about?
Rick: You guys are talking about white powder in plastic bag aren't you?
2 Officers: Now why would you say that?

You can read the rest on his post.
Posted by Stuart at 1:51 AM No comments:

Email ThisBlogThis!Share to TwitterShare to FacebookShare to Pinterest
Labels: Nutrition/Hydration 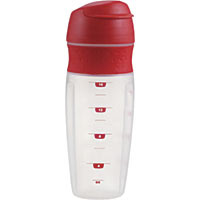 As an early morning runner my out-of-the-door nutrition is a mix of Naked Superfood fruit juice and Whey Protein Powder, up until now I have been using a little Braun blender, it’s great but it mixes things so well that it actually creates a froth and often overflows the mixer-cup. While meandering the aisles of Whole Foods I discovered the perfect alternative, the Zyliss Quick Blender Shaker, it has an emulsifying ring, what’s that you say? Well it’s basically a very wide grate that allows the ingredients to be broken down and mixed and stops clumping and glooping; these are technical terms. Apparently you can also attach it to a blender and use it for making salad dressings and smoothies…just goes to show not all gadgets need to cost hundreds of dollars!
Posted by Stuart at 9:26 PM No comments:

Email ThisBlogThis!Share to TwitterShare to FacebookShare to Pinterest
Labels: Gizmos and Gadgets, Nutrition/Hydration 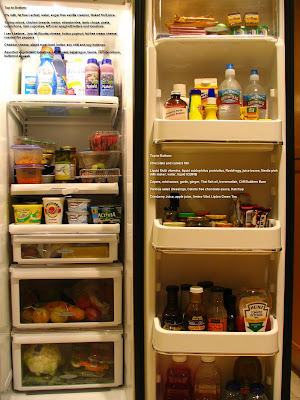 As a regular contributor to the Nike+ message boards I was prompted to start a thread entitled The Nutrition Team; eating better for better results.

To me a diet is not something you "go on" but it is what you eat day after week after month etc, I was once told by someone much wiser than me; "the only thing you need to be able to do to cook is to read", so pick up a cook book and give it a whirl.

I am a big fan of developing both a nutrition and hydration strategy for pre, during and post races, and with my ultimate goal of running ultra distances, it is important to me personally that I have these dialed in before race day. In addition I am a bit of a foody and enjoy cooking and of course eating.

In the spirit of total disclosure here’s a glimpse into my soul…well not quite but at least the soul of my kitchen. Click on the fridge for a contents list.
Posted by Stuart at 11:32 PM No comments:

Part of this years family vacation (or holiday) depending where you read this from was a week in North Wales, specifically in the Snowdon area. Now anyone familar with Wales knows that the weather is typically doing one of three things:

This in itself is ok as you always know to pack a large amount of Gortex and other technical fibers however this year was something special; from the BBC Weather website:

The weather review for the 25th to the 30th records the following; Persistent and heavy rain on the 25th continued with up to 75mm of rain falling in some parts. Although quieter conditions then affected the country over the next few days with generally lighter and more scattered showers, yet more heavy rain spread in from the west on the 30th."

As with comedy, the crucial element in booking your holiday is; timing! Unfortunatley ours was rather off!

On the way there we stopped at Simmons Yat in the Wye Valley, to break up the journey, the B&B was on the banks of the River Wye and you can really see the effect that the rain had had in washing the topsoil into the river and turning it brown. I managed a quick run along the river before finding the trail had been washed out: Simmons Yat river run

Still it wasn't all bad and we managed to get some decent hiking in, despite the rapidly growing five month bump. The first was a local - out the back door - walk which had us trying to locate a Bronze Age ruin; unfortuanley, to employ a quintessential British term "rain stopped play" as we found ourselves almost mid calf deep in a large wet area; ok it was a bog! and after 4 hours we back-tracked it just to be safe. Our second jaunt was is almost complusory when in the area; Snowdon, this time heading up the Watkin Path and safely made it nearly to the summit which was covered in cloud for most of our climb, prudence being the better part of valor we decided against the "big push", which is essentially along a slate-bed shale path, we managed to make it up and down in around five hours. Our third and final stroll took us up and above Harlech, of "Men of Harlech" and Michael Caine and Zulu fame, for some fantastic views of the Glaslyn Estuary, Port Madog and Port Merion.

Of course I had packed my running gear and slotted in a few runs here and there, with a simple view of getting in some hill training. Anyway in typical British fashion - it's all about the weather! Here are some of the compulsory snaps taken along the way; from both the runs and walks as well as the Garmin profiles for anyone more interested.

Email ThisBlogThis!Share to TwitterShare to FacebookShare to Pinterest
Labels: Holiday/Vacation, Not local area

Congratulations to June's Quad challenge winners, Patcini and Tommaso for the female and male, respectively, competitions, Patcini is resident in Rome, Italy and Tommaso in Miami Beach, Florida - however both are Italians!