Living it up in Death Valley! 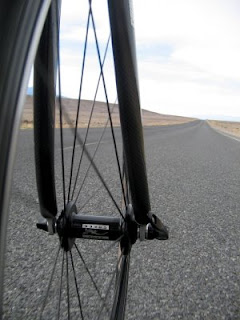 As noted in a previous post, my wife and I took off for the weekend, destination; Death Valley. We shot off early Friday and after a leisurely 5 or so hour drive we were at our destination. Obviously not the quickest of drives to cover 300 miles but speed was not of the essence; enjoying the scenery was.

My wife and I are fortunate to not only live in a state and corner of the United States that has a multitude of National Parks, but we are lucky to have also been to fair number of them however nothing prepared us for the vastness of Death Valley. The sheer immensity and scale of the landscape is beyond my descriptive powers and so I will save you my rambling adjectives and focus on the facts/events.

We arrived at Furnace Creek Ranch and checked in, unloaded the car and headed out for something to eat. I’ll spare you the details etc and fast forward to the next morning. The plan was to cycle from Furnace Creek to Badwater (approx 40 miles), this would be the first “long” outing for my wife on her new Christmas bike and so laden with water bottles and the like we set out.

Furnace Creek sits at -160’ and we were heading to -282’ so you would think that the road would be a gentle downhill, oh not so, roll after roll as you can see from the elevation profile below presented itself with long straight undeterminable distances to the horizon;

That being said there was obviously a net loss and after about 90 minutes we rolled into Badwater; 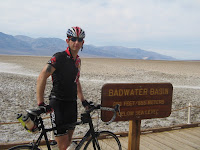 We asked a confused tourist if she would take our photo (my wife refuses to have her photo on the blog so you only have me) and after spending 5 minutes convinicing her that we wanted her to take our photo and not that we wanted to take a photo of her; confused is an understatement, she agreed. I have no idea what happened but somehow all the “by the sign” photos are blured!

Anyway we walked out on the salt flat someway and after realizing that it was really just a walk out onto salt flats we turned around and headed back to the parking lot.

All the salt crust had gunked up my cleats and so I spent so time de-gunking them, not long enough however and after several stops on the road later I was able to clip back in, not after shanking my finger with my multi-tool!

The way back was simply that, such is a ‘there and back’ route, this time we had a headwind that while being not overly strong was consistent and so we plodded on, not wanting to provide my wife with the fond memory of seeing my ass disappear over the horizon, I periodically circled back to ride with her and make sure she was ok. To her credit she muscled through the whole ride; although she is the first to admit that it was about 10 miles too long.

We had had some cloud cover for most of the ride but for the last 5 miles or so it lifted and the sun shone on the nearby mountain faces picking up all the colors in the stone…beautiful! 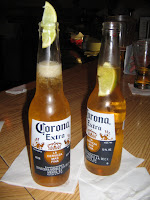 We arrived back at the Ranch and I dove into the General Store for Ice Cream and we sat in the sun relishing both the ride and the creamy treat! After depositing our bikes back in the car we jumped in the car for a quick whiz around Artists Drive and Artists Palette before the sunset, we were a bit late but could see why it was so popular with the mineral deposits coloring the sand and stone; hence the palette. After getting back to our room we headed off the warm spring fed pool and swam for about 20 minutes just to loosen up those saddle sore muscles. After this we headed to the restaurant for tea, medals...and beer!

The food was fair and honest with burgers and salads being the order of the day, there was a fine dining restaurant as well which basically served up the same food with a cloth napkin and an extra $20-30 per head! 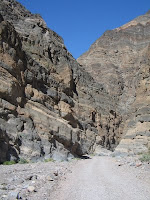 The next day we had grand plans of taking in Titus Canyon and 30 mile off road drive and then heading to The Racetrack before heading home. Titus Canyon was spectacular and the drive was amazing, of course being off road we weren’t exactly eating up the miles and three hours later we exited. The trail takes you through two passes and along some pretty tight valley-side-hugging paths culminating in a giant slot canyon that is at places only 20' wide and approx 100' high.

With one eye on the clock we decided to make a quick dash to Ubehebe Crater; a volcanic crater some 600’ deep and a half mile wide. We arrived and were nearly blown over by the wind! With a knowing look we snapped some pictures and jumped back in the car and headed home.

The drive home was uneventful (just the way I like it) and we were home in time for bedtime stories as promised.

With still lots to see, we’ll definitely be back to the Valley…although we might wait till fall!

What a great weekend!

Yes I took my Garmin, and here’s the data, check out the elevation profile. Of course there are a lot of photos, this is the first batch taken with my point and shoot, I add a link to the better ones when they’re uploaded.