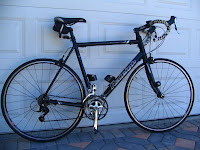 Allow me to introduce you to my two new best friends; Walter and Nigel, that's Walter on the left.

I had a long consult with my Physical Therapist on Monday; essentially I have; through running with insufficient cross training, unbalanced my quadriceps with my hamstrings. My IT Band is so tight it is pulling my kneecap off alignment by about 40 degrees. The good new is that all is not lost. Initial treatment consists of 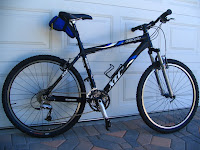 ultra-sounding the afflicted areas and a series of stretches that I have to run through three times a day, this I have been told will be followed by strength training. In meantime I am under a “no running” red flag although I was told I could go out for a “light jog”. The good news is that I can cycle and that’s where Walter and Nigel come in, I am fortunate to have the Santa Monica Mountains at basically one end my street and some good road hills, (Topanga & Los Virgenes) which should accelerate my quad development, at the other end.

The short term prognosis is that The Bulldog will be shelved but the good news is that I should get the green light for Long Beach in October.
Today I am off to the podiatrist…watch this space.
Oh and in case you’re wondering Walter is a Raleigh Grand Prix and Nigel is a Scott XTC2.
Posted by Stuart at 6:23 AM