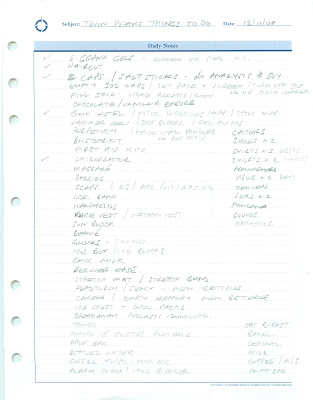 This post could also have been "Only the Paranoid Survive" (poached from Andy Grove) or "Control Freak...who, me!?!"

But anyway as the say failing to plan is planning to fail and so I have my Things to Do List, which is mostly things to pack but you get the idea.

I have been placed in the 5am start wave for Saturday's Twin Peaks race, it could have been worse it could have been the 4am group, there is a third group leaving at 6am, the groups are not big maybe 18-20 runners in each for the 50 miler. The 50k runners leave at the more civilized hours of 6:30 and 7:30am. What this does mean is that I'll be starting in the dark so a head-torch and hand torch will be needed for the first hour or so, the night before is full moon; if there is no cloud we'll have that benefit. The weather forecast looks ok; Morning low clouds, then partly cloudy, 20% chance of rain and breezy in the afternoon, high near 67°F.

And so to the race plan. This is my second (and last) 'A' race of the year and so the goals are high. My primary objective is a sub 11 hour finish (an average 13:10 minute miles or 4.55mph), why 11 hours, simply it is the WSER qualifying time. To achieve this I need to shave 24 minutes off my current finish time of 11:24. Among the takeaway lessons from Leona Divide was to turn off the autostop feature on my Forerunner; I realized around mile 30 that I had no idea how much time I had "stopped" for and by that time it was too late to make it up. Secondary goal is a new PR and tertiary to finish. My epiphany time: 10:52.

I looked back on my training log and as predicted I completed 90% of the target mileage, I was hoping for closer to 95% but a surgeon's schedule threw me off. Some stats:

They say that your first ultra is about finishing, this is something I can testify to; both my first 50k and 50 mile races were little more than slogs, but now, like the PCTR 50k last month, this is all about racing; not that I have any chance of coming anywhere but in the middle, but I will be racing, my competitor is simply the hours, minutes and seconds of a stopwatch.
Posted by Stuart at 8:03 PM