It was a little over three years ago that I posted about joining Gold’s Gym. To be honest in those three years the first two were not that productive, an occasional spin class and time on the treadmill were mostly it, ironically in the beginning I used the pool a bit as I was recovering from a torn vastus medialis that’s the inner (closer to the other leg) muscle that is part of the quadriceps sustained at 100 in the Hood the September prior. That all changed once I was ok’d to run and then I stayed away from the pool and that’s pretty much what I did from then to November of last year. Then I started on the crazy triathlon plan!

From that point I went to the pool a lot; 3-4 times a week every week…yes EVERY WEEK, one week I swam 16,000 yards! But all Gold err good things must come to an end and so this is my last month at Gold’s. To be honest that’s the good news, the better news is the $40 a month I will be spending 40 times over elsewhere, well actually mostly adding to the P5 fund!. The really great news is that I can swim here at my local Parks and Recs pool for $2 a pop!

Open air, salt water and full shall we say full of swimmers rather than splashies! 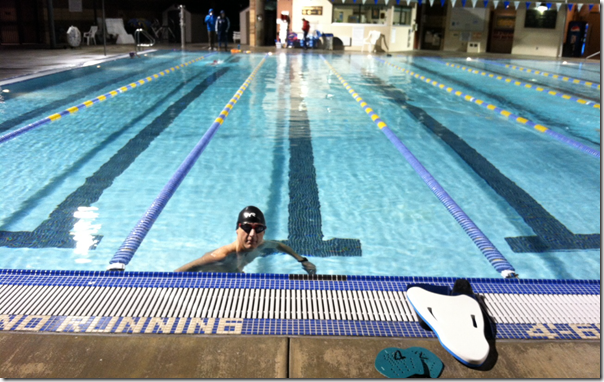 And yes you can swim out side in December in the dark and in the rain!

Oh and if you’re thinking hang on didn’t he just say he was starting to do weights at the gym, the complex I live in has a free residents gym!

Email ThisBlogThis!Share to TwitterShare to FacebookShare to Pinterest
Labels: Swimming