Rivet Raid in the bag.

Not a race but a ride to raise money for the Santa Monica Mountains Restoration Trust. There would be one timed segment and what a doozy it was; Puerco Canyon from PCH, 2.95miles 1500' gain average grade 10%! But I am getting ahead of myself. The original ride was cut short due to all the rain this week so we were all riding the shorter 50 mile loop, which would have approx. 5000’ of gain.

The day prior I had felt a sore throat coming on, it’s my Achilles Heel, and with one of the kids in the house sick during the week the odds were pretty good I could catch something. I stopped on at a Pharmacy on drive to the race and picked up some DayQuil and Ricola. A good swig on the former and a pocket full of the latter saw me through the day. 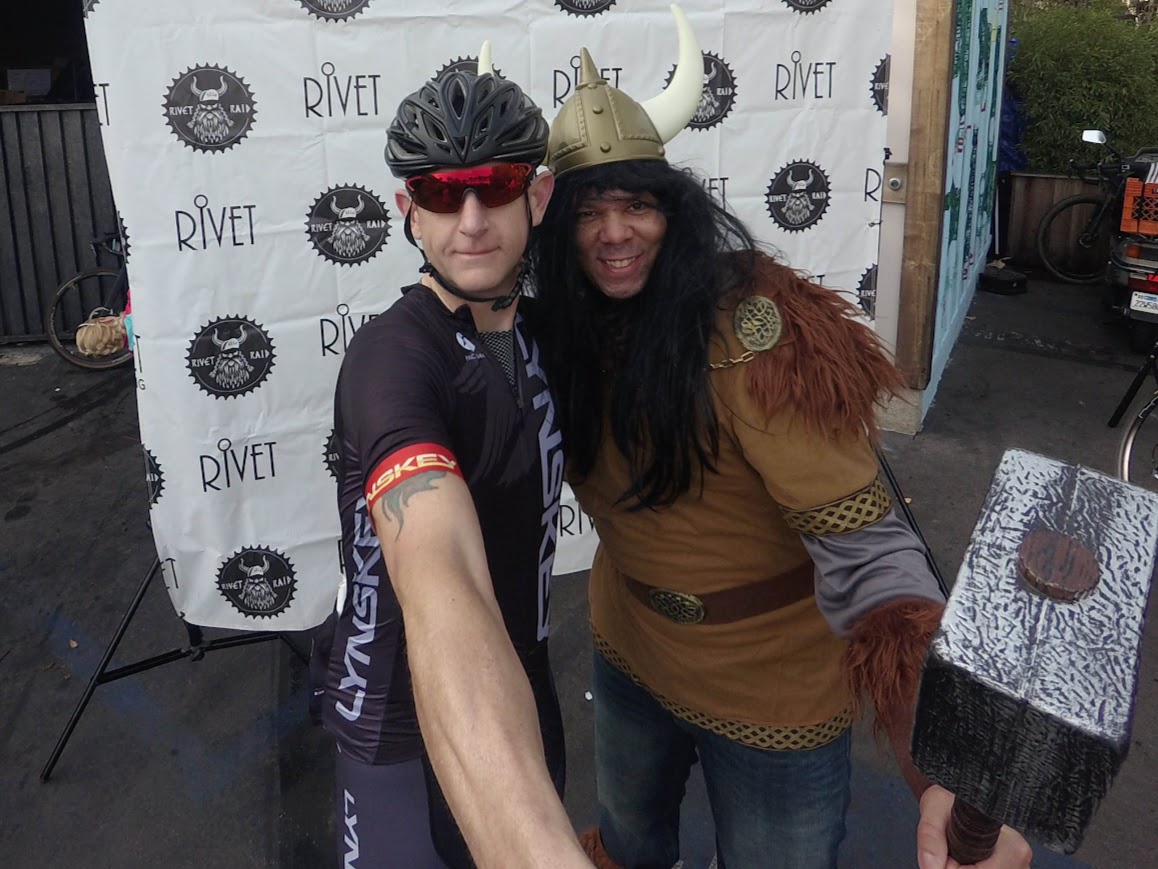 80 or so riders left Peddlers Fork restaurant in Calabasas Sunday morning. The roll out was easy enough and there was plenty of chatting, Unfortunately the group got split by traffic lights very early on and I was at the front of the second half. As the lights turned green a few hardy souls tried to bridge and I was happy to let them go. An uneventful 4 miles brought us to the bottom of Dirt Mulholland and we started the climb up. Recent rains had left the fire road soft in parts and there were the remains of some flooding but if you choose your line carefully you could miss all the standing water and keep a clean pair of heels. The route steadily climbed up and I found myself chatting to a couple of riders, one a local and another from a San Diego team. I recognized the kit and know a couple of BWR peeps who are on it. “You must know, Joe Schmoe” is always a good ice breaker and the conversation was easy from that point on. The local rider pulled away and then suddenly pulled over and dismounted. His rear derailleur had exploded and was wrapped around his cassette. I asked if he needed assistance and he declined saying he would limp back home without issue. I saw him later at the finish and he had indeed made his way back to the start/finish and was having his bike fixed by the VeloFix Van that was providing support. 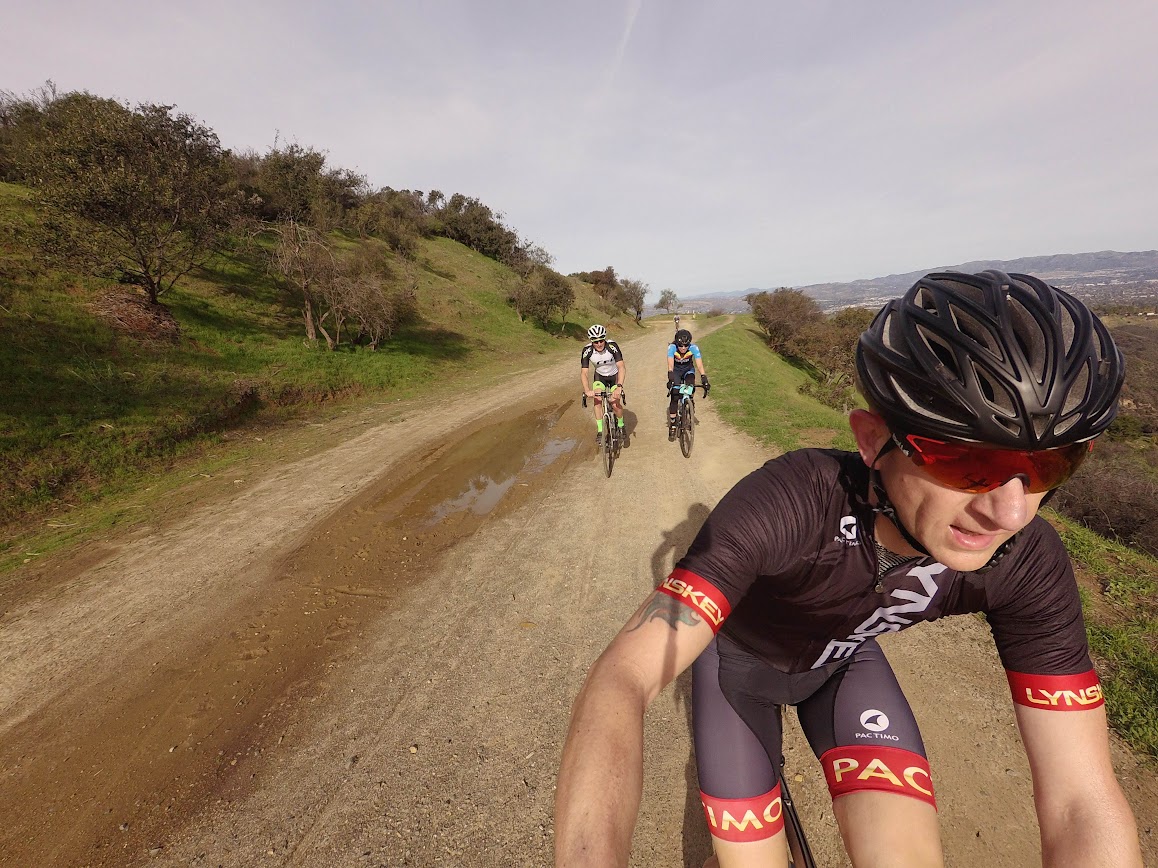 The trail topped out and we had the easy roll down on Sullivan Ridge Trail towards Santa Monica. I had last ridden these trails over 18 years ago on a hardtail 26” mountain bike shortly after moving to the US. To top half of the trail is gravel and the second half is concrete. 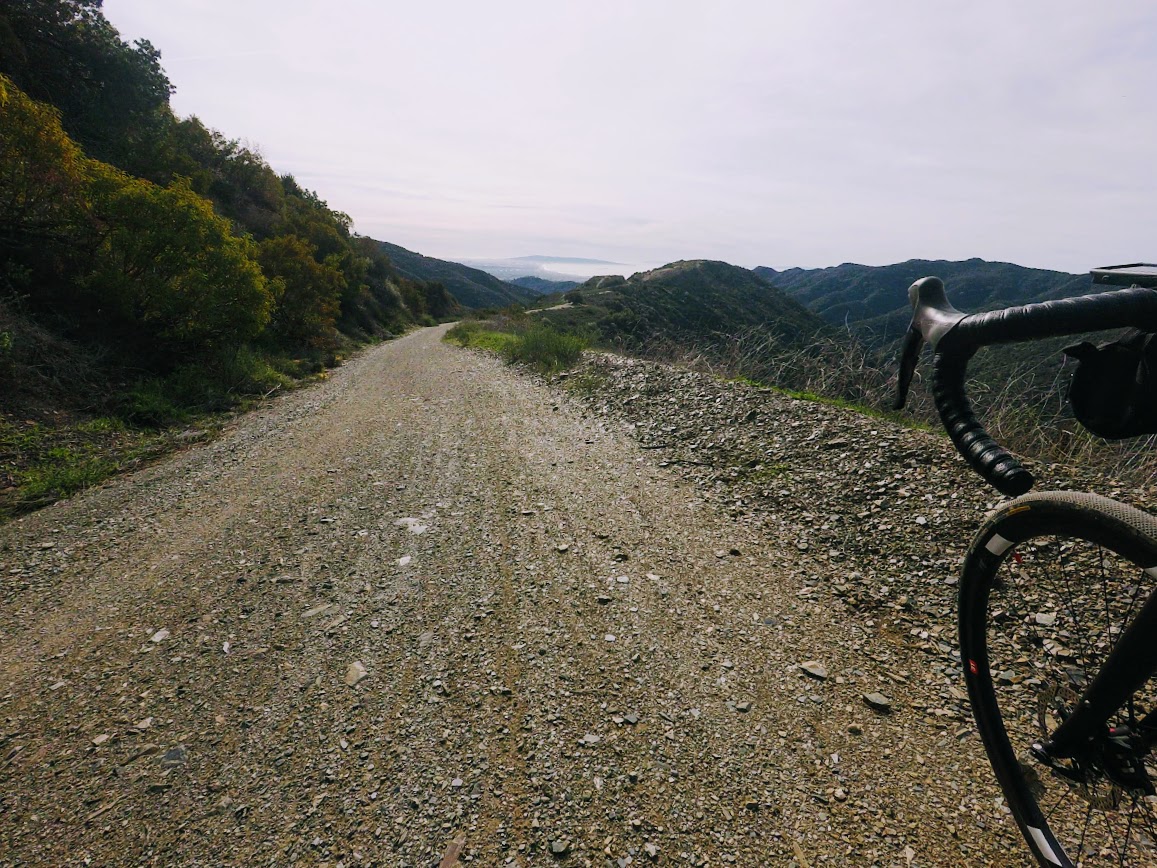 Memories kicked in, mostly, and a safe roll down the broken concrete road that was littered with potholes and hikers was the prudent choice, Another rider I know, Chris, caught me and we rode into Santa Monica together keeping one eye on the route on my Garmin and another on the traffic. The course wound its way through the blocks of Santa Monica. Some how we managed to miss the first Aid Station, I wasn’t worried as I had plenty on me but Chris turned back to find his original starting buddy. Other than multiple stops at crossing, junction, traffic lights and my expressed disappointment at one lady who rolled through a stop sign as I was mid-junction crossing, this section was uneventful.

The course dropped us onto Pacific Coast Highway (PCH). As you would expect there is plenty of traffic, but it ebbs and flows as the traffic lights catch and hold cars. There is no real bike lane but enough of a shoulder to make it ok. 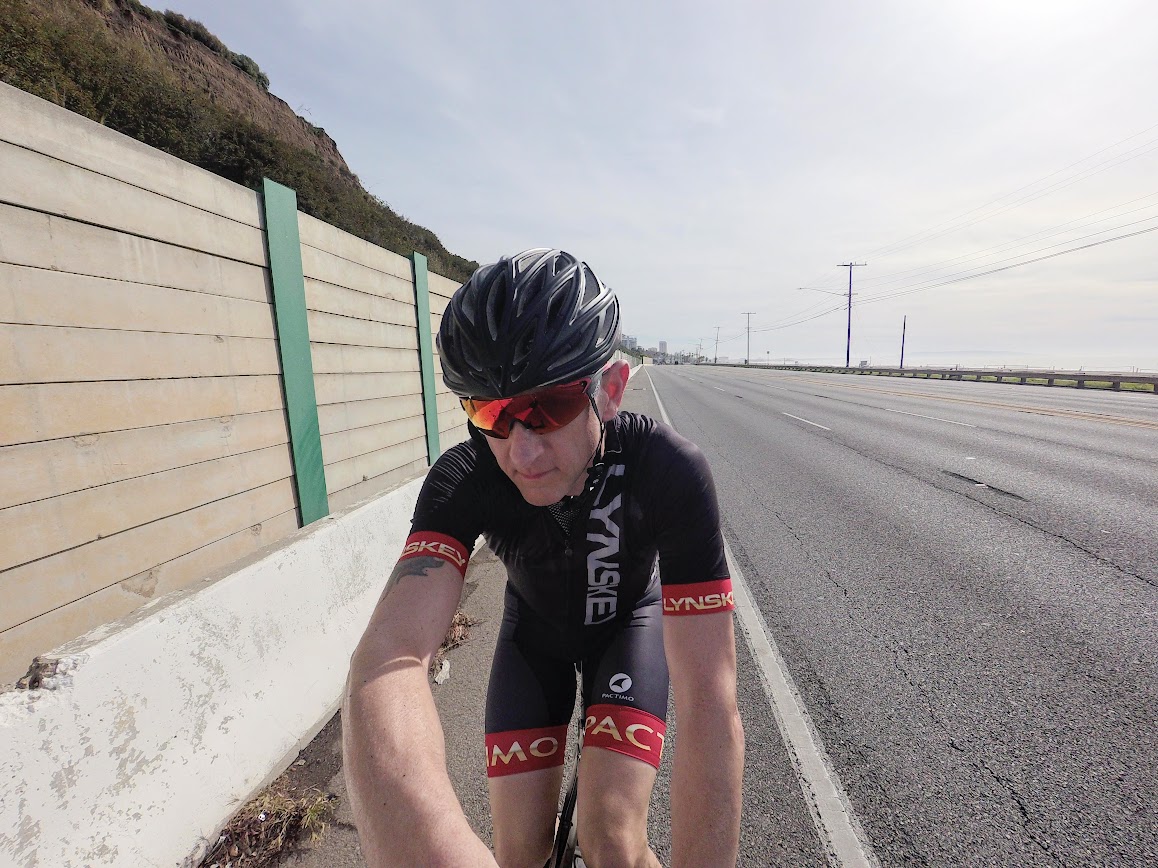 Shortly past Pepperdine University was the right hand turn onto Puerco Canyon. The first half mile or so is road, then a gate and then the trail. This was the second Aid Station. I stopped to fill my bottles and asked had they seen any riders, as I, surprisingly hadn’t. I was told I was in the Top 20???

But then looking over my shoulder I saw the lead group, who had stopped at the first Aid Station had caught me, I went from Top 20 to top 50 in 2 minutes as they all caught and passed me!

This was the timed section. I had never ridden this trail, but I had run, well, walked it. It’s a long steep slog. The recent fires had taken its toll and the landscape was stark. That said the recent rain and sunshine was already making a difference with new green growth showing everywhere. I sat in and pedaled up. As I was waving my camera around someone asked me for it and took some great photos of me! Yay! 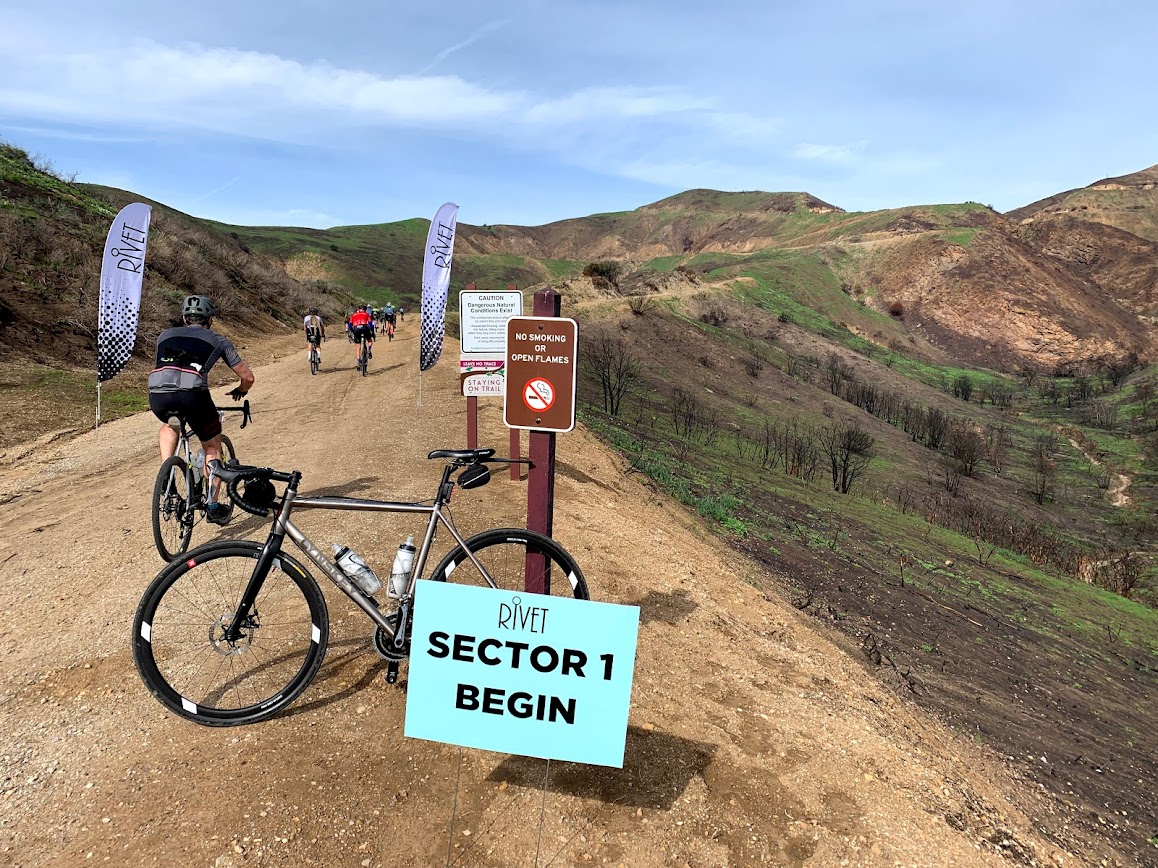 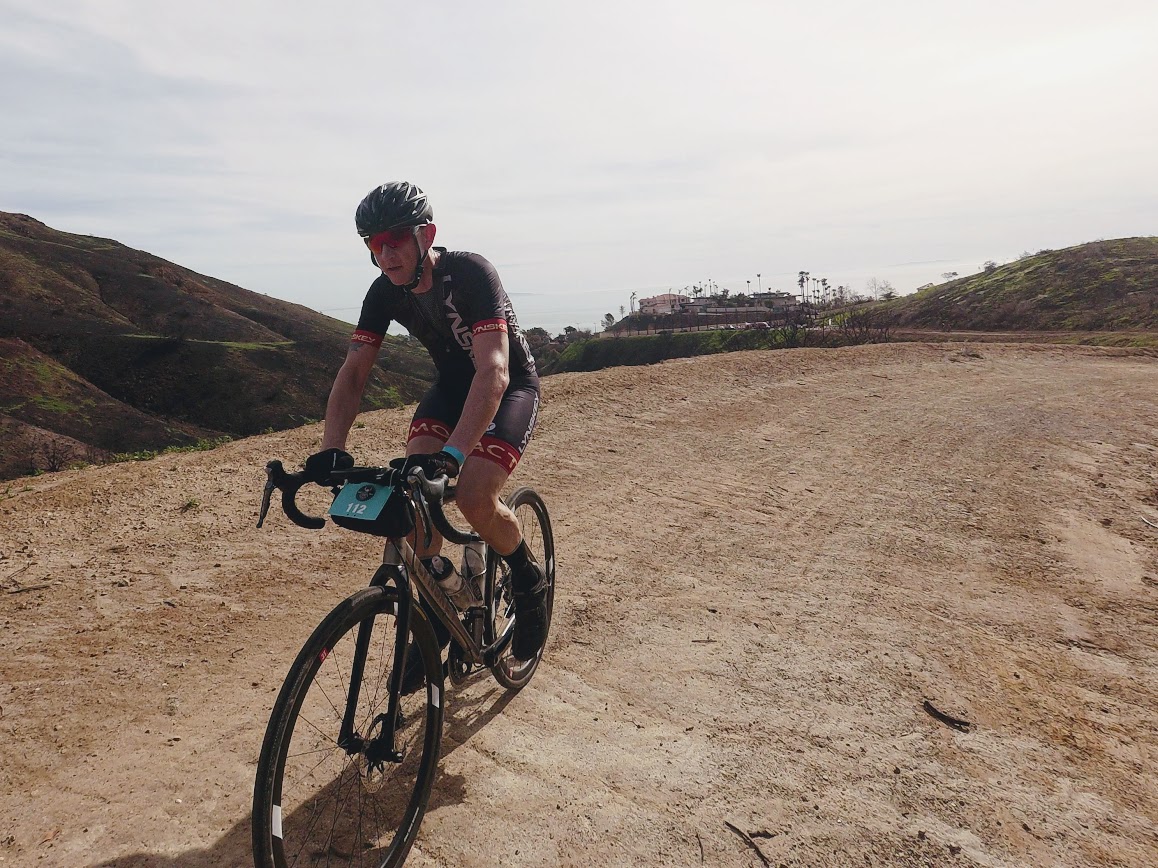 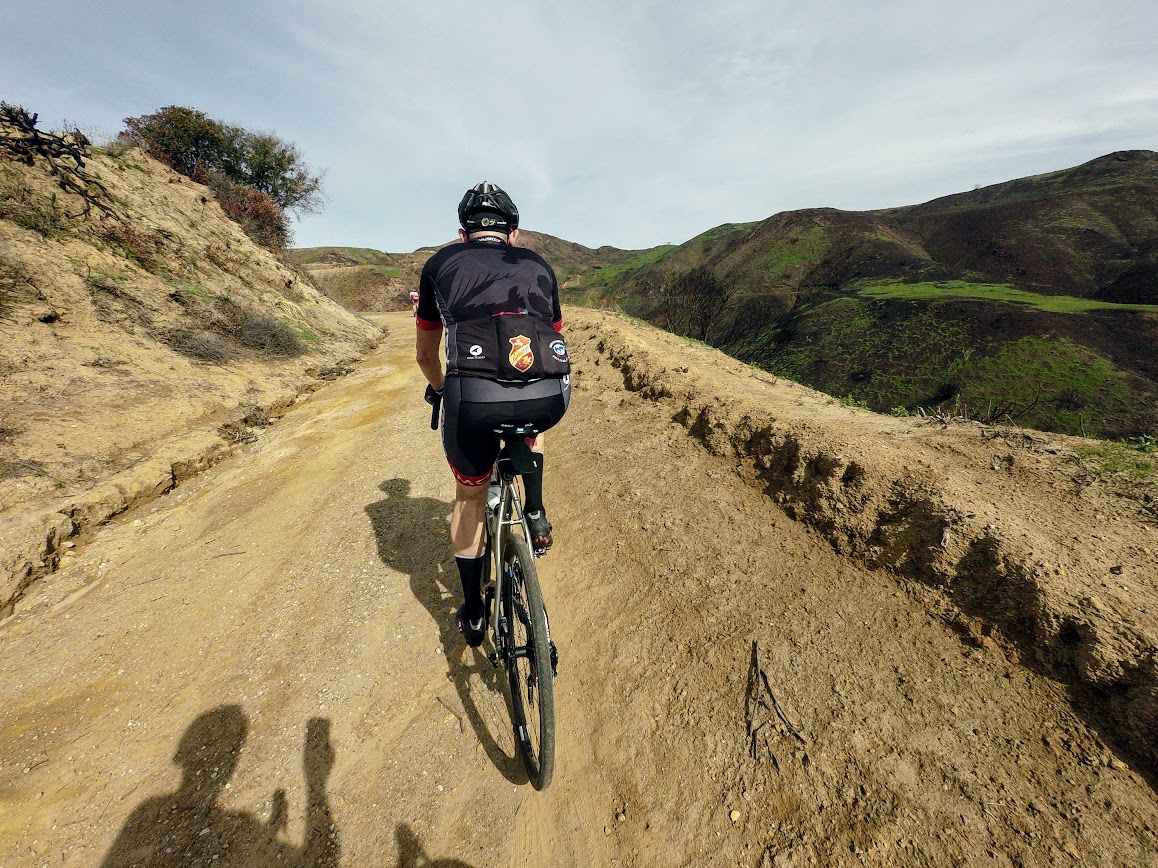 The first section of the climb was a series of ridable switchbacks, the higher you climbed the better the view. Until these ended and you got a reminder of what was to come… 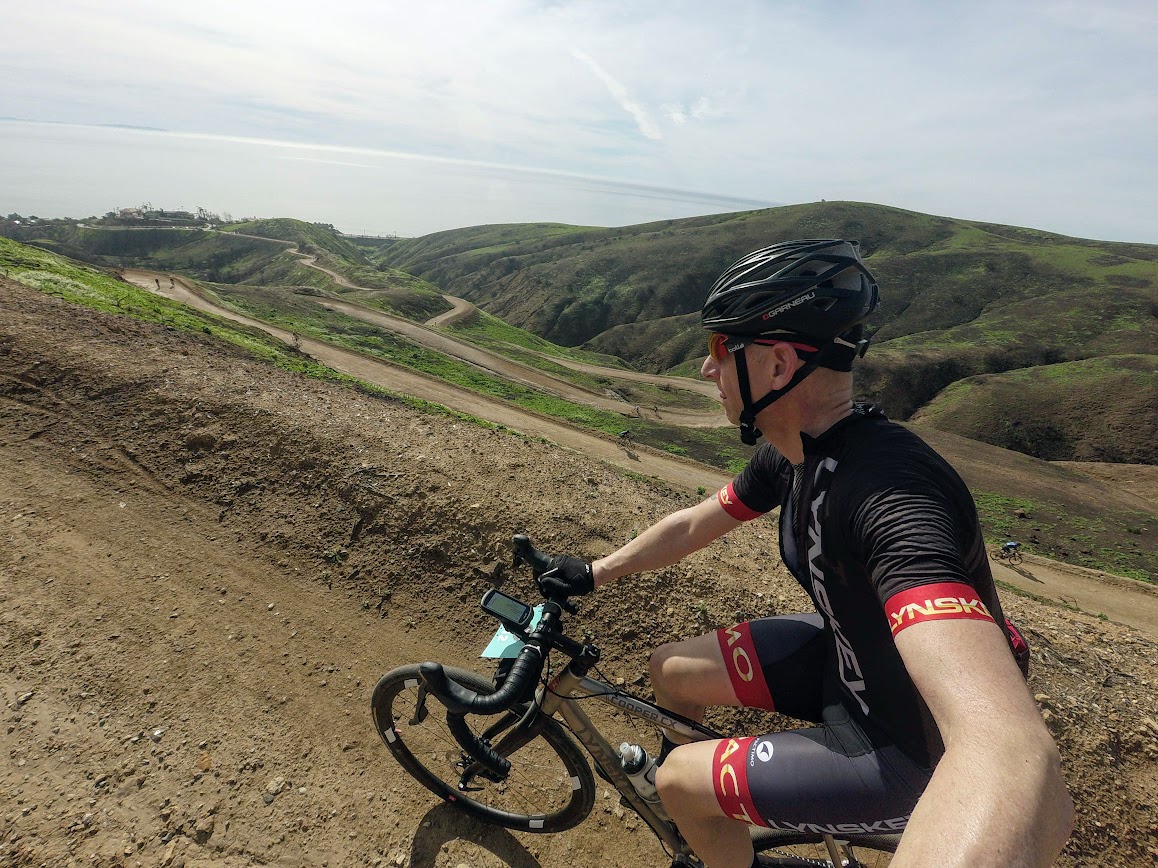 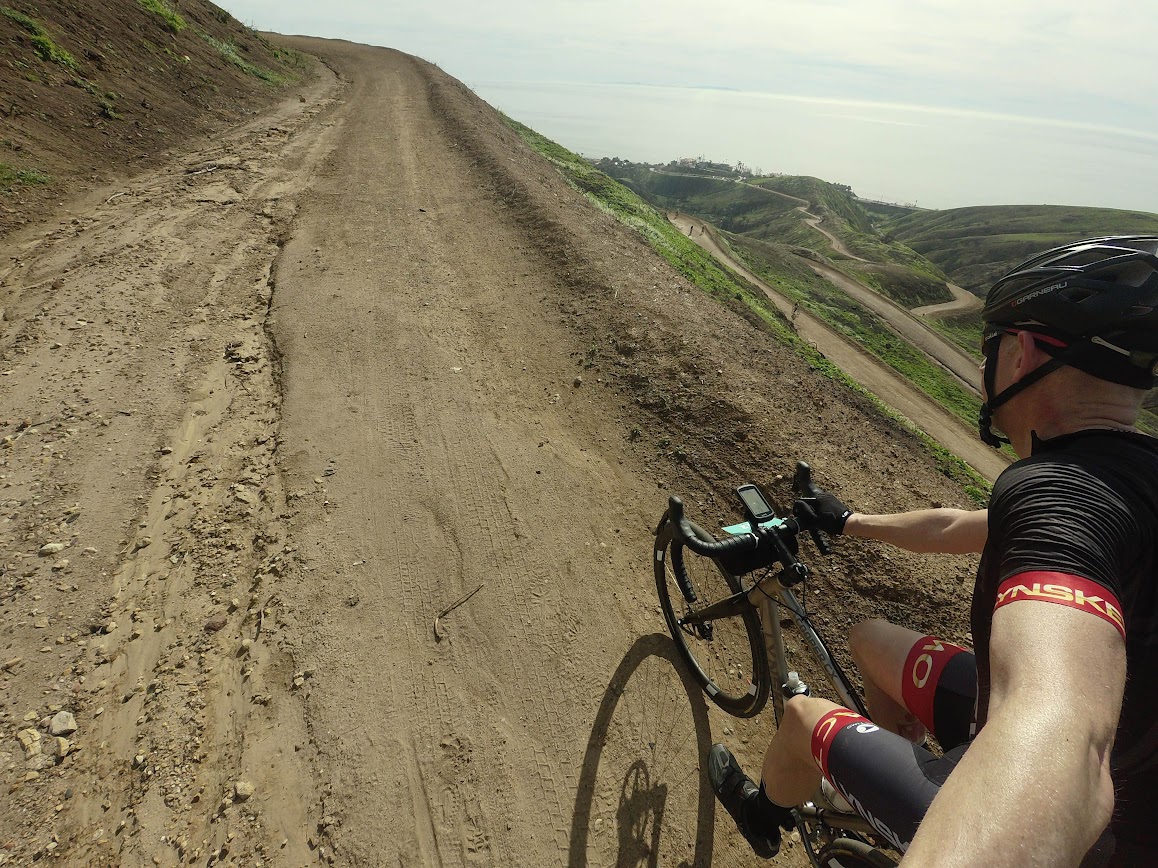 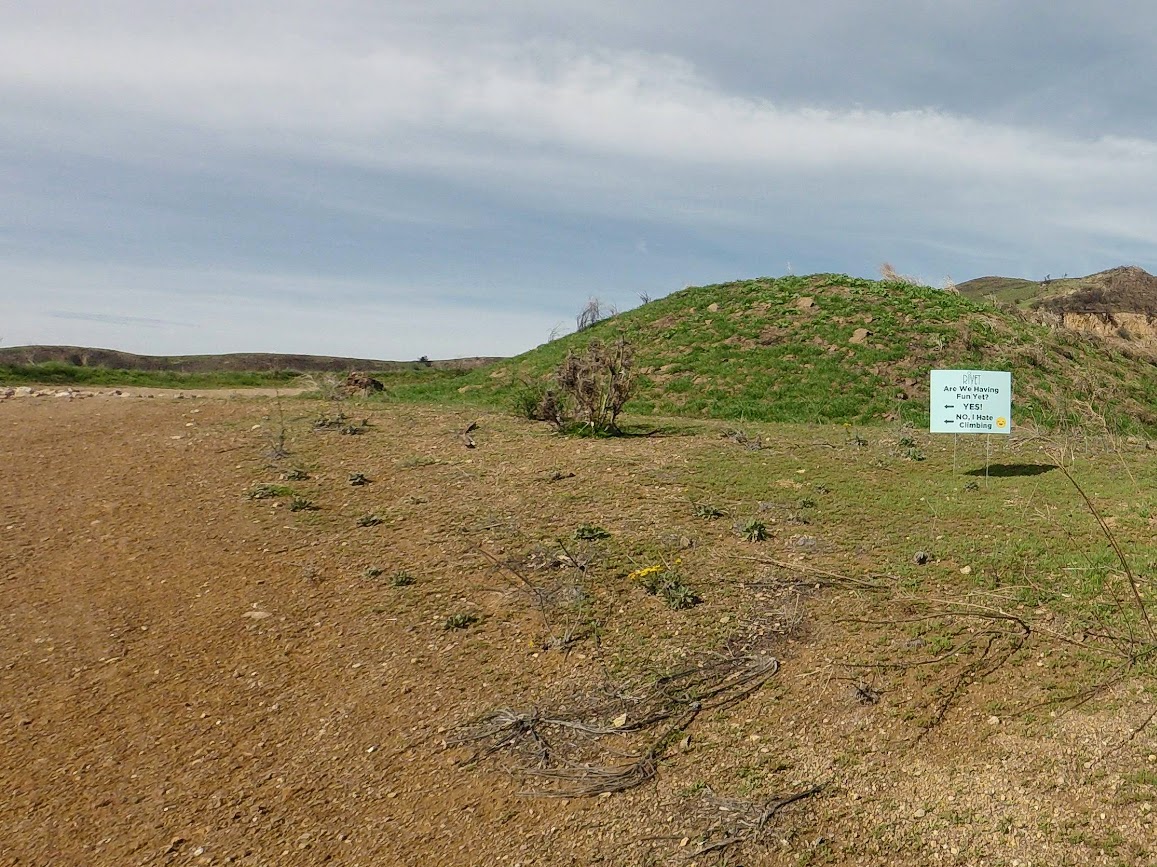 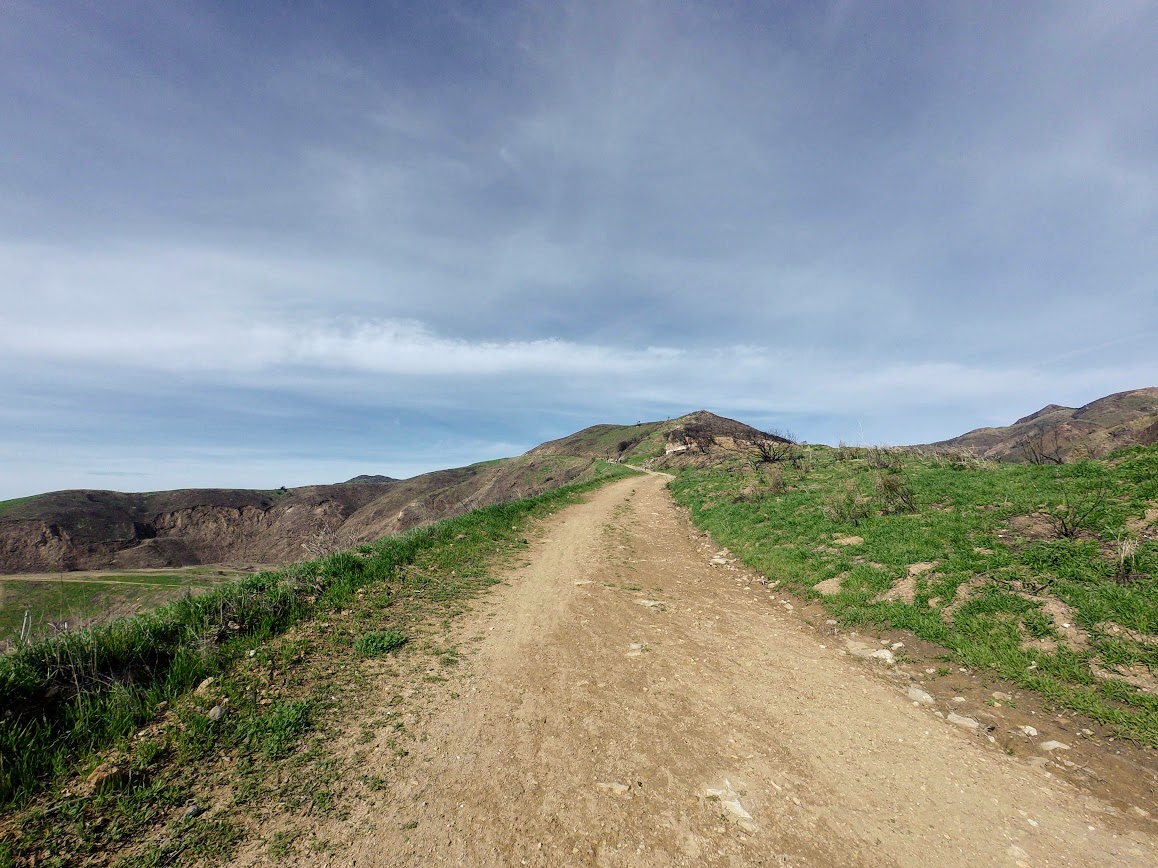 I’ll spare you nitty gritty. The climb took 44 minutes, there was some walking, some cursing, a few downs and plenty of camaraderie from others suffering. Oh and the sun had come out too…temperatures rose to 80f! 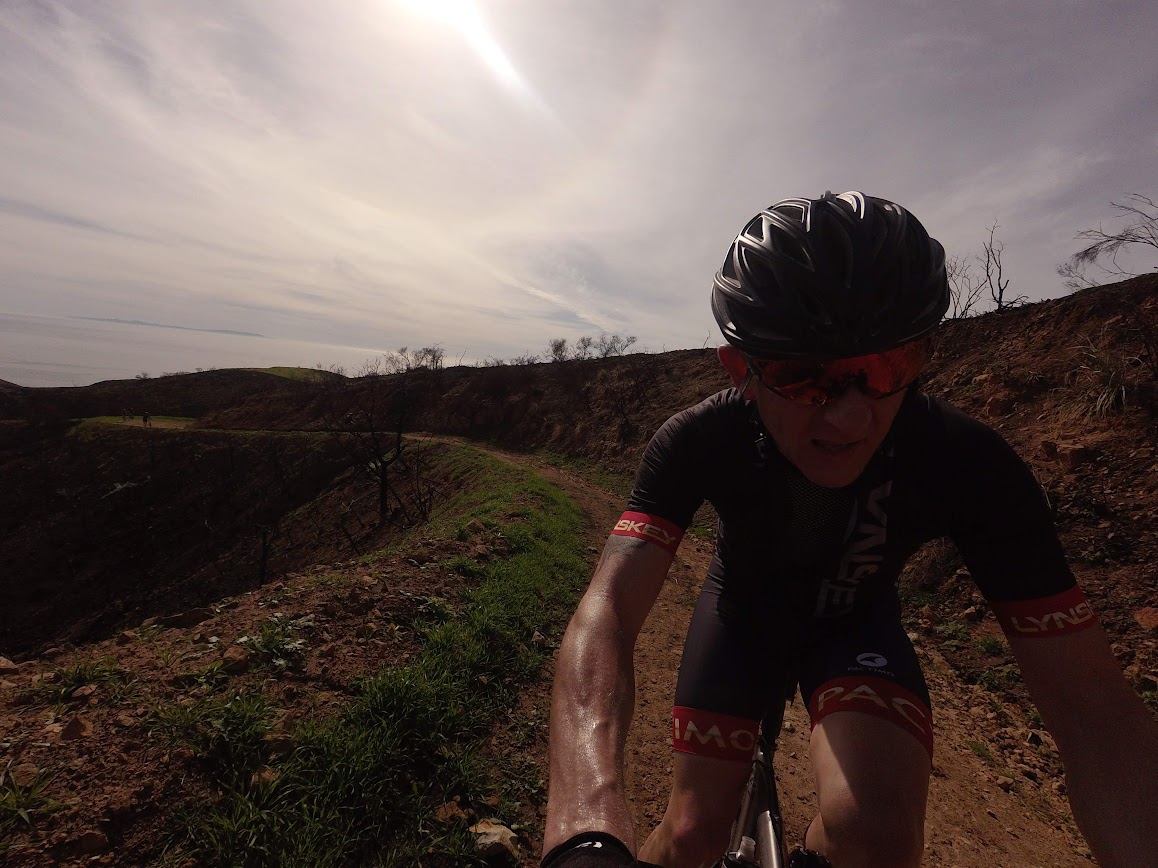 Still at the top we were treated to a nice view for all our hard work!

The roll down the back side was no cake walk either, again I had run this fireroad as part of 50km runs from previous life as a runner which gave me an insight into what to expect….I am not sure this was a good or bad thing?! As before there was some washout and the channels made it somewhat challenging, as on the climb there were a few sections walked but mostly my Lynskey took everything in its stride. The third and final Aid Station was at the bottom and I stopped again to fill up my bottles and fill up from the cheese board that was on offer! Salty cheese and meat….yes please!

After a short stretch on the road the final section was a series of twisty rolling single track nothing too onerous other than a couple of short sharp climbs and some greasy muddy sections. 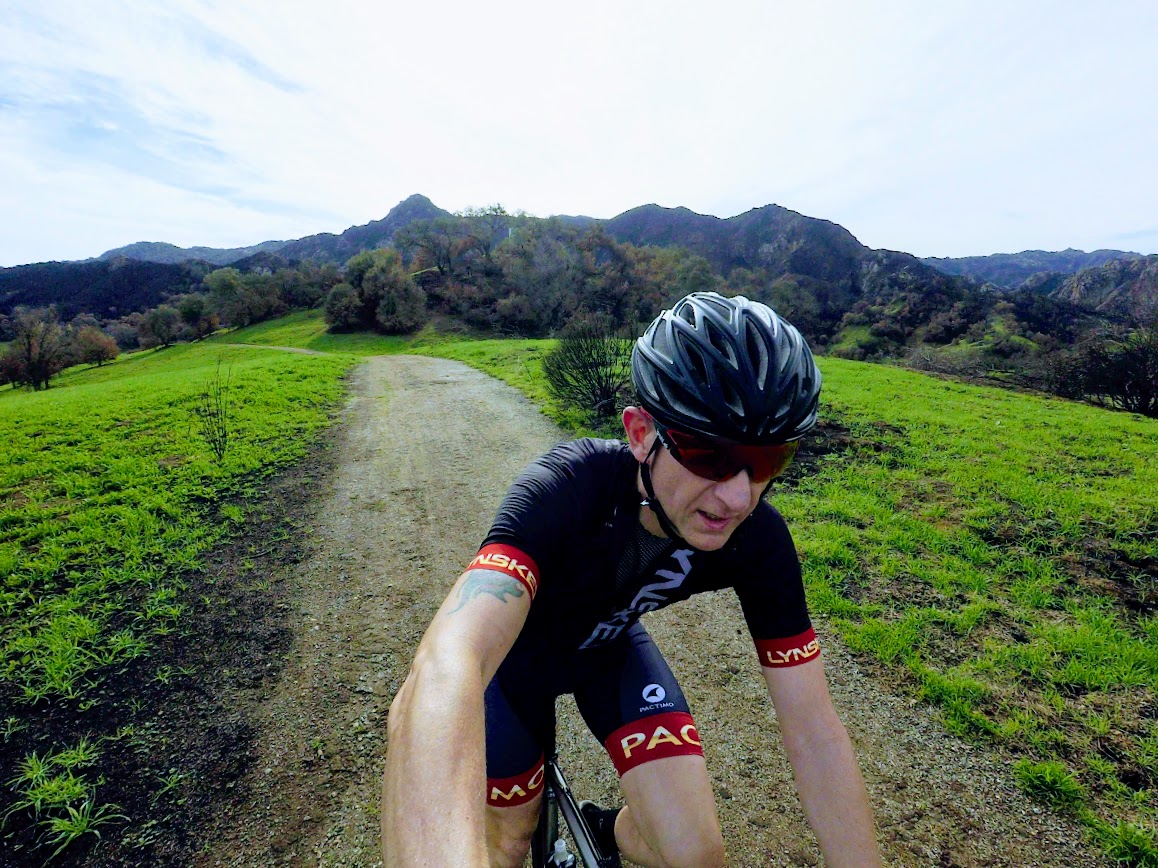 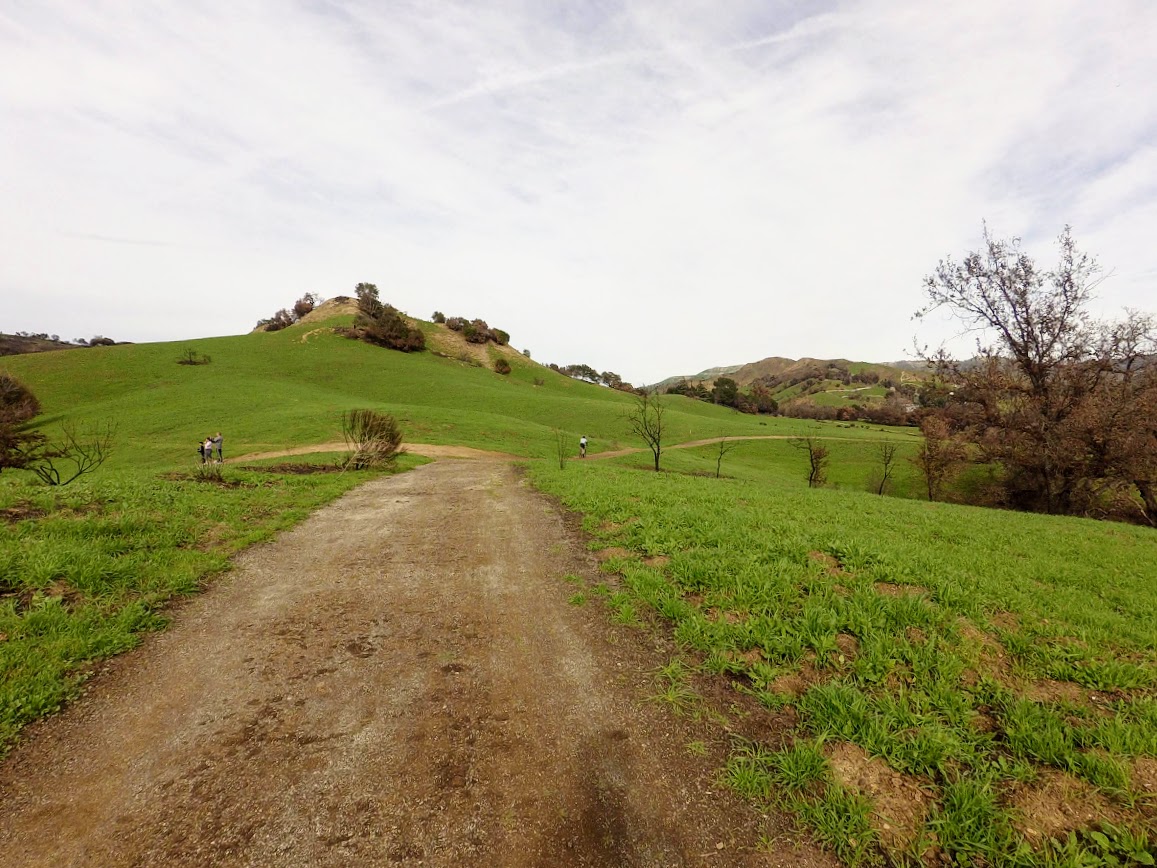 Of course with 300 yards of trails left I took my eye off the ball and toppled over in an unceremonious pile in the mud! A nice two mile roll back to the Finish generated enough speed to throw most of the acquired mud off of my bike!

A couple of right hand turns, and I was through the Finish Line.

Plenty of food was on offer and folks were milling about swapping war stories from the day. I was feeling pretty crappy and my throat was sore, so I scoffed the brisket burger, grabbed my bike and headed home.

All in all this was a grand day out and a good test of both my fitness and the bike. Both need a few tweaks but nothing major. My fitness is pretty good, there’s definitely room for some improvement but that will come as the season opens up more. The bike is rolling along nicely but there are few creaks that need some attention. Switching out my Eggbeaters for Shimano XT SPDs has removed the annoying squeak and I had no real issues in clipping or unclipping. I am still on the fence about switching out my 3T wheels for my Stan’s Tubeless, I’ve had no real issues to date running self-sealing clinchers…of course this may well turn into famous last words! I need to shake off this stupid cold/sore throat thing before digging back into training.

The event was well run, the Aid Stations well stocked with goodies and volunteers, Both of which I have seen fall short of the mark on other events. The course was challenging and got me, at least, riding new trails. Like many of the events in Southern Californian (BWR, Cobbler, etc.) the Rivet Raid is not a pure “gravel” ride. It’s a far cry from your Mid-West minimum maintenance roads that are wide, rolling, straight and…gravelly! That said, and in fairness. the descent along Sullivan Ridge Trail was gravel. So as long as you have this in mind when signing up you’ll be fine, and the challenges you may encounter along the way will only improve your bike handling skills!