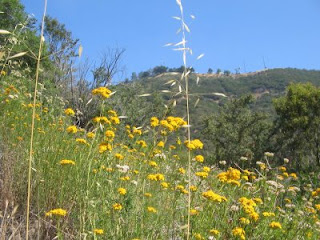 Sunday I headed out to run a section of the Backbone Trail. I’ve run bits of it before; more by luck than judgment and I wanted to recce’ out as much of it as I can for when I run the whole thing in August. The trail crosses several main roads that run east to west as it runs itself north to south along the spine of the Santa Monica Mountains, what this means is that there are places to park and you can run sections. The plan was to park my car at Kanan Dune and run south, I was hoping for around 13 miles in total; which puts me a couple of miles short for next weeks start of training long run; 15 miles. The cloud was low and the weather was cool – perfect.

After a short sharp up the trail leveled out and then dropped down and then climbed up and then down and then up; this became a regular feature of the trail as there was very little “contouring” and mostly the trail assaulted the climbs in a full frontal manner, it was nothing too serious and gave me ample time to practice my walking! 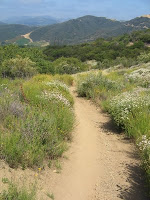 I also managed a first for me, which is not bad considering all the miles I’ve covered; a faceplant! No harm done, more shock than pain and fortunately I landed on the side of the trail in the shrubbery! Of course what I tripped over was...absolutely nothing!

One nice feature was the continuous change in running surface; hard packed mud, to sand to trail dirt to bare faced rock in parts not only did the surface change 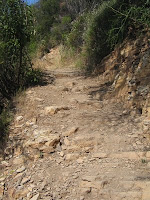 but the environment did; literally you would round a bend and it was like being in a completely different climate; from thick woods, to meadows, to rocky desert it really was a case of if you don’t like something run a quarter mile and it’ll change. One noticeable feature was the riot of color from all the spring plants and flowers that are in bloom, yellows, oranges, purples and whites and of course accompanying the flowers was multitude of butterflies, at times it was like running through a butterfly garden.

Two and half hours of running and thirty minutes of taking photos and I was done and heading home.

For anyone local this makes and excellent and rewarding run or hike there's plenty of sign/mileage posts to tell you you're on the right trail, and if you have a buddy with a car you could easily set up a point to point rather than an out and back run. Here’s the MotionBased data and the photos.