Back on the grind, working up to Dirty Kanza 200 next June, I have yet to register, it doesn’t open until January 9th. I expect it will sell out fast. I am starting training Christmas week but hey you have to start somewhere. I am also traveling early January so that will make a dent. My plan is to follow the TrainerRoad Traditional Base II Plan, then the Base III Plan, transition to the Sustained Build and then the Double Century Plan which is yet to be published but will be soon hopefully. So that said here we go…

Monday, TrainerRoad 2x8 FTP Test. First real workout in 3 weeks. 15 mins warm up then into the actual ride. Another 28 minutes of warm-up, a couple of 8-minute time trials are used to assess Functional Threshold Power (FTP) & Lactate Threshold Heart Rate (LTHR). The recovery interval between assessment efforts is 10 minutes. Went out too fast on the first one (256w) and blew out. Regrouped and aimed for 200-210w on the second set. Better average. Test result FTP186 this feels too low so upped to 200 for now.

Wednesday, TrainerRoad Hawk Mountain. You tell you're back in the saddle when it's Wednesday and you have over a 100 miles for the week! TR Trad Base II, all work no fluff! Hawk Mountain is 2 hours of Tempo intervals spent between 70-80% FTP with brief, intermittent, 1 to 3-minute recoveries at 55% FTP.

Thursday, Shoetest…got new shoes so I wanted to try them out. Quick spin to test out new winter (black) shoes Giro Trans, had to switch out some of the arch supports to get a solid fit. So far so good, plenty of toe room and the sole is super stiff. 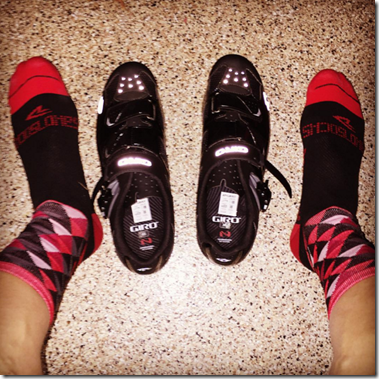 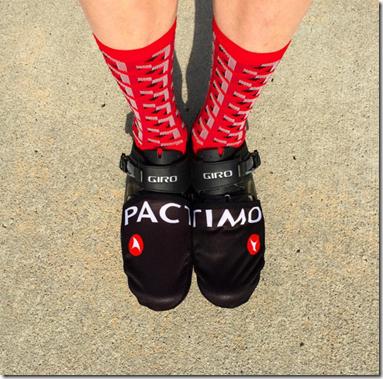 Friday, off. You know, Charistmas and all that!

SaturdayTrainerRoad Kennedy Peak. 2 hours 30 minutes of Tempo intervals spent between 70-80% FTP with intermittent, 3-minute recoveries at 55% FTP.Some standing climbing thrown in with a lower cadence. Nice solid ride! New shoes are a keeper so now to buy another couple of pairs and future proof Cinderella!

Sunday, TrainerRoad McLure. Head game, hard game, head game!!! 3+hours on the trainer ends the first week of training. Weekly totals; 11:40 hours and 216 miles! Back in the saddle for sure! TrainerRoad taking no prisoners! Maclure consists of nearly 3 hours of aerobic Endurance riding spent between 60-70% FTP.

Weekly totals; 11:40 hours and 216 miles! Back in the saddle for sure! TrainerRoad taking no prisoners!

Oh and that FTP test…yeah it was sucky, but by the time I got to the end of the week I noticed that my old FTP of 233 was still active, so I am just going with that for now!