Everybody's doing it so why can't I? 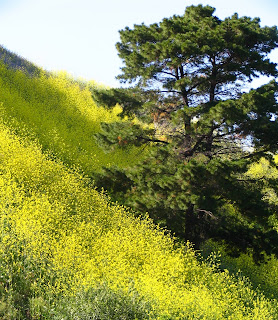 It seems that everywhere you turn in the blogosphere there are pictures of blossom, well not one to miss the band wagon and now that we have had the first day of spring, here are a couple of snaps from our back yard. The first is on the bank behind us, it's open land that leads up to a State Park, not possessing green fingers in fact I have to admit they are downright brown, I have no idea what the plant is but it is over every hillside at the moment giving everything a gold hue.

The second photo is off one of the many varmints to be found in our yard, he's actually standing on a regular sized brick so he's not quite as man eating as he seems, along with the gecko populous we have million or so rabbits, there are days when it's like living on the film set of Watership Down, and squirrels, but it's not too bad between the owls, coyotes and rattlesnakes, all of which have been in the yard at one time or another, the animal population is self regulating...such is the nature of things.

On a running note, I hopped on the treadmill for a 20 minutes session this morning, I was certainly not setting the world alight but it's a start, my knees took a mile of so to remember running but seemed ok after that, I hope to repeat it again tonight for another 3 miles or so.
Posted by Stuart at 4:38 PM