And so on Friday night I turn up at my Doctor’s office after spending two hours in the car only to be told, can I reschedule (note told not asked!). I slowly count to ten: 1..2..3..4..5..6..7..8... it is after all not the fault of the receptionist and it would be rude to shoot the messenger. So I rebook my appointment and leave. Now having not built in any long run time this weekend and the thought of no long run next weekend due to the reschedule I am wondering how I can carve out some time. Anyway after a chat with my lovely wife Sunday night is available and she agrees to put the boys to bed, ably assisted by the in-laws who are staying. So just before dark I head out, no trails just a simple 4 hours on the local roads.

The pace is not fast but steady for the first two hours and I am covering the mileage easily and without issue. I have in mind the distance of 26 miles. It’s hard to gauge the exact time as my 305 pauses at traffic lights when I do and I have a fair amount of junctions to cross, (22 in total by the end) which allow for a quick breather but break the pace, stride and concentration. Around Mile 15 I can start to feel the road through the sole of my right shoe, nothing too worrying but it’s there. At Mile 20 my pace falters some and I refocus my efforts, my pace is dropping from mid 8s to mid 9s and ends up in high 9s and even a couple of 10s by the end. By mile 25 I am pretty spent; it’s been a long time since I have gone anything further than 12-15 miles on the roads and I am starting to feel it now. I slog through the last 2 miles and then just for the hell of it push for another 0.2 just to make a round marathon distance rather than a round number.

I walk the last mile home to avoid a hard cold stop, consume a large bowl of home made cereal (carbs) and another of Greek yogurt (protein), pop 8 Recover-ease and a multivitamin, two glasses of water, stretch, pack my bag for tonight's 8 miler, shower and I am in bed by 10:30.

So I finish with an unofficial time of 3:55:43, an average pace of 8:59, not my fastest time but not my slowest, I need to upload to MotionBased to get the true numbers but I estimate another 10 minutes spent waiting for traffic lights. I was only nearly mowed down by cars only twice. Consumed 6 gels and 60oz of Pepetuem and burned off 3476 calories which will help towards Swap-Beat, results to follow! No MotionBased data and no photos but here's the GTC info: 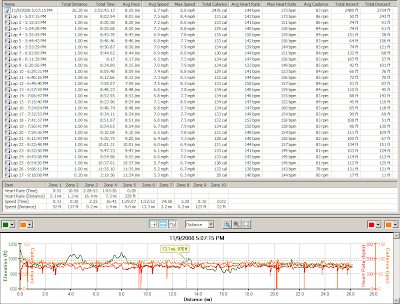