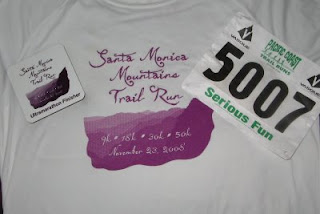 This post could also easily have been titled: A race of two halves or SLB; your mind is writing checks you body can’t cash! But I am getting ahead of myself.

As I left my house I had one eye on the weather, living inland it’s almost a given at this time of the year that the weather will not be as warm at the ocean and I wasn’t disappointed. Low cloud obscured the sun and the starting temperature was 56f degrees; perfect running weather. I made the short drive to the start line and arrived in good time with nearly an hour to go before the race actually started, I was amazed at the number of cars already there and I was forced to park on PCH. I grabbed my coffee and walked to the registration table. After I had picked up my number and pinned it to my shorts I bumped into Meiko from the TRC who was running the 50k and then I also saw Billy and Jes also from the TRC, Billy was running the 30k with some friends from a RW world forum, Jes was running the 50k and was worried; she has been suffering from ITB issues and was dreading the thought of a DNF, I gave over my mantra band and told her to think about the acronym for the next 6-7 hours and see if she could work it out! I also bumped into someone from work who was running the 18k and his wife who ran the 9k, quite a contrast to this time last year where I just turned up ran and left! 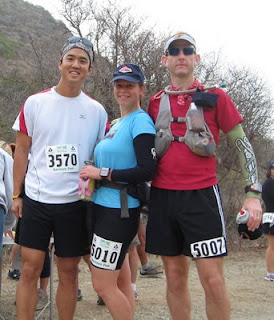 I went through my stretching routine garnering a few odd looks as I prostrated myself in the parking lot, but whatever, and then chatted with Jes waiting for the gun to off, it did and so did we.

The race is run around a figure of 8, it starts at a parking lot just by the ocean. You run the first loop twice and then one and a bit of the second loop, it has you running up and over two valley passes and covers 5 hills each of which are about a 1000' of climbing. The first mile is along a reasonably wide path this is followed by another two miles along a twisty single track and you gain your first 1000’, needless to say because of the steepness of the incline lots of people slow to a walk and if you get bunched up your forced to move at their pace, with this in mind I pushed hard at the beginning to get a good place. I pushed up the hill and topped out after about 35 minutes. The trail then rolls for a couple of miles looping back and then drops down for another five until you reach the start point. Having only run once this week post surgery my legs had a real spring in them and these miles all whizzed by at sub 10 minute mile pace (four at sub nine). I reached the start and blew past the aid station without stopping, I was wearing my Wasp vest and had a handheld and was popping a gel every forty minutes.

From the start point I started up hill #2. Two miles later I was up the top and running down the fireroad into the next canyon, this was a route change from last year and apparently this was because several people fell running down the single track; which we would run up it this year. While running down a fireoad is fine, this one was strewn with ankle turning rocks and we had to swerve to avoid some mountain bikers. I pushed on the down the hill opening my stride and pace and dropping in a 7:29 mile, this was my fastest mile by far so far and would be the quickest of the day. As we bottomed out we picked up another fireroad and hit the second aid station and turn around point, I grabbed some water to cool off and wet my cool tie. From here we about faced and ran along the fire turning left to pick up a single track trail which then rejoined the fireroad and we ran back over the hill; three down two to go. It was here I recorded some video (sorry about the angle!) as I hadn’t taken many photos. Quite clearly I had in mind what could happen in the next half. I pushed over the top and back down into the starting valley and it was during this climb that the cramps started. I am not prone to cramps, in fact I can probably say I’ve never had them while running, but three times in the last week I have had cramps;hamstring once and calves twice. This time it was my calves again. Not bad, well not really bad but bad enough especially on the uphills so much so that from here any major hill became a real slog. To be honest I have no idea why, I was taken an Endurolyte every hour and had no real change to my diet in the last week, so it’s is and remains a mystery, one that will need to be solved within the next two weeks! Running downhill my calves were mostly cramp free unless I caught my toe on a rock and then they would lock and I would need to stretch them so I endeavored to be careful. My pace was falling off from a 10 minute ish miles, it had crept to 10:40 on the third hill, I managed to reduce that to 10:30 on the way down but it would soon creep up again. The fourth hill was a repeat of the first, although this time having shed the 30k runners the 50kers where spread far and wide and I had this section mostly to myself, I plodded up and recorded my slowest mile on the way 18:04; definitely a run of two halves, this time I topped out at a considerably slower pace and made my across the rollers and actually overtook someone who looked to be having a tougher time than me. I closed off the loop and heading back down passing the start and finish for a torturous forth time. With only 9k left there was no question of not finishing but my goal of sub 6 hours was looking less and less likely and I focused on getting a new distance PR. I had in my mind that I needed to beat 6:24 (which is actually 10 minutes faster than my PR, d'uh!) but it was all to the good. Again the climb seemed tortuously long and was painful. As soon as I reached the top it was time to turn around and head back down. With one eye on my watch the last three miles got successively faster. I could feel someone behind and when they turned down the offer to pass I figured that I would just pull out all the stops and go for it aiming for anything faster than the 6:24 which would be a fair reward. I covered the last 0.78 of mile in 6:31 and crossed the finish line according to my Garmin in 6:22:52, (also according to my Garmin it measured 32+ miles) it was only when I started typing my report tonight I realized that my PR was 6:34 so I actually reduced it by twelve minutes and not two! Official times are yet to post.

I stretched out and grabbed some Sprit which hit the spot as it always does and relaxed chatting to other finishers and Sarah, one half of Sarah and Wendell the Race Directors who, once again, put on a great event, anyone in California could do a lot worse than attend a PCTR event as their first ultra, they’re well organized and very friendly. I hung around for a while and saw Jes finish; after 7 hours she still hadn’t figured out the acronym and I didn’t tell her!

So post event here is the postmortem; going out too fast too soon, such a rooky mistake, aided to my blow up in the second half, I could have probably bluffed my way through however the addition of the cramps really knocked my game into touch, had I not had those I could have run more of the ups; I walked a lot of them and could had had faster coverage on the flats, that would have reduced my time significantly, a minute here, ninety seconds there and a sub 6 hour race would have been a reality. That being said and not wanting snatch total defeat from the jaws of victory I did PR, this was actually my 1 year ultraversary (there's no such word but you get the idea) and last year I finished in 6:54 so it's a pretty big reduction year on year.

Of more concern is the recent cramping episodes, I need to do a bit of research and address then as it’s one thing to have then at mile 16 in a 31 mile race but having them at mile 16 in a 50 mile race is a whole ‘nother ball of wax so that gives me two week before Twin Peaks to figure it out. Other than that from a fitness perspective I felt pretty good, HR was high but it usually is I peaked at 185 bpm and spent 5:30 in Zones 4 (51% of total) and 5 (36% of total). Recovery was fine and although a bit achey and stiff I am in pretty good shape.

There’s a few photos here and the MotionBased data is here: