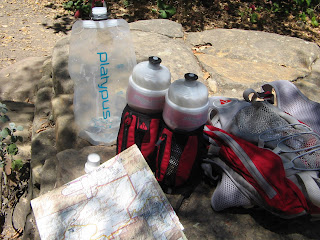 With the 4th of July celebrations landing on the weekend I decided to mix up the weekend which involved moving Sunday’s long run to Friday and then move Monday’s run to Saturday which would leave me most of Saturday and all on Sunday for holiday shenanigans. The schedule called for 25 miles/5 hours and I had reviewed the Backbone Trail map and calculated that I could cover the first 25-30 miles in fairly good order. My wife agreed to pick me up so I could leave my car at the start point until later in the day.

Things didn’t get off to the best of starts, I was late leaving and then it took me ages to drive through the mountains to leave a drop bag with some water and goodies on the roadside where the trail crosses the road. Then when I got the trailhead, I had to wait for Park Rangers to open the gates. By then time I was underway I was behind schedule by over an hour.

Starting at the coast means that pretty much the only was is up I headed up the Ray Miller trail which climbed up and into the low cloud, temperatures were cool and the cloud hugged the coastline. I dropped down into the next valley and followed Sycamore Canyon Fireroad, here I missed my turning but was put straight by a couple of mountain bikers. I found the right trail and started the second climb of the day. This section of trail I had run and raced on previously during the XTerra race series, maybe it was because of the familiarity or maybe I just missed the turning but that’s exactly what I did. The climb up Boney Mountain has two false summits over three and half miles and it wasn’t until I had reached the top that I concluded that I was on the wrong trail. 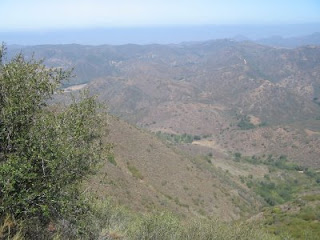 I checked my map and decided that there was not enough time to back track and called my wife on the cell phone to give her a new collection point. I made my way back down the mountain and during the remaining 90 minutes took a couple of side trails, (including one to monument the parks donation), that I had always fancied but never had the time to take the last one putting me at the bottom of a mile climb up a tarmac road! I also stopped and topped off my handhelds from the water bag I was carrying; a sign of how warm it had gotten as usually two bottle are enough. I finally got to the parking lot at a little after 1:00pm having been out on the trails for just over 5 hours and with my Forerunner chiming in the 20th mile of the day.

In some aspects it was a disappointing run; missing the turning and coming up short mileage-wise was insanely frustrating, as was the delayed start. On the up side I got some good heat training, the thermometer in the car said 89f when I got in and I had been in the sun for the majority of the run. Also I now know that I need to connect the trails coming from the opposite end to ensure that I know where I am going; it’s much better to screw it up in practice than when I will be running the entire Backbone Trail in August; where time constraints don’t give me much margin of error. My wife’s interest in the hiking the Backbone Trail has also piqued and we’ve divided up the trail into day hike sections; so I have extra opportunities to ‘recce’ it out before August.

After getting home and cleaned up we headed back to the ocean for a classic "seaside" lunch of fish'n'chips and the largest bottle of beer I could find at Neptune's Net an eclectic cross between a bikers bar and a surf shack and then spent the rest of the afternoon on the beach.

Saturday morning I was out early for 8 miles, even though I have two more long rides in the coming weeks; this marks the start of running back to back runs. And so ends week 5 of training; 48 miles run, 116 miles on the bike, 16 hours training. Here are some photos and the link to the Garmin Connect data.