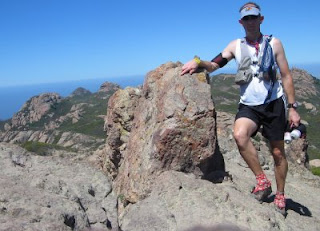 A Fat-Ass run is typically one where the runner provides his or her own supplies usually in the form of something on the side of the road, it's usually a recognized race distance and there is never any hoopla, shirt, medal etc. This Skinny-Ass one was, well, 51.64km to be precise and a whole different ball of wax; especially on the supplies front!

This weekend’s long run was a scheduled 28 miles; I was planning to run the reverse of last week’s (less the getting lost bit) to try and connect the Northern half of the Backbone Trail. On the map it looked around 30ish miles; I figured I could make it 31 and call it a Fat-Ass 50k. I started early and was on the trail by 6:15, my pace wasn’t fast; I was really looking for time on my feet and had agreed with my wife to pick me up at the coast between 1:00 and 2:00pm which would give me about 7 hours, I was running with my cellphone (which I hate) but whatev!

The forecasted temperature along the way was for around 95f inland and 85f on the coast at midday, how ever you looked at it, it was going to be hot. With that in mind I had dropped 2 liters of water at what I thought would be around mile 12, it turned out to be mile 15. I was carrying two handhelds and another liter in my vest. The temperature was rising but was runnable, I consciously took things easy, walked the ups and even some of the flats, taking lots of photos and even some video clips.

I had gotten through most of the water by the time I reached the drop and made up two more bottles and refilled the liter bag, I called my wife who was in no rush and so I said that I would call again once I had gone over Sandstone Peak, at 3,111’ Sandstone Peak is the highest point in the Santa Monica Mountains, and would lead me into the section where I missed the turning last week. The climb was uneventful and I took the detour to the summit for a video opportunity.

Coming down the backside was all very new territory to me and was very barren with very little shade, in fact zero shade, this was around midday and like me the temperature had slowly been climbing; it was best described as “very bloody 'effing hot”. I picked up the elusive Chamberlain Trail which I had failed to find last week. My assumption is that this trail is little used, it was very overgrown and was a bit of pain to navigate, just as you got into your stride you would have to stop to avoid being torn up by some very aggressive and overgrown bushes. However that being said the view was spectacular, I have seen the ridgeline a million times from lower elevations but had no idea that a trail ran over it. I called in again expressing my ETA and said that I would call in again once at the bottom…duh!

Finally I reached familiar territory and headed to the canyon floor this was at the mile 25/26 point after about 7 hours and I was running very low on fluids, I grounded out on Sycamore Canyon Fire Road which would take me straight out to coast, I dug out my phone; No Service – bugger!

At this point I would have been quite willing to call it quits and make my way to the coast but I had told my wife to meet me further up the coast at the next canyon exit and so there was nothing to do but climb to higher ground and hope I got a signal. I started a very methodical walk up the next hill periodically checking my cellphone, after a mile and a half I finally got a signal and then noticed that the battery was running out! I got hold of my wife who was stuck in traffic and told her that I had about another 4 miles to go, I did umm and ahh about going back but I was nearly at the summit and so with the available option of finishing what I started I pushed on.

By this time I was totally out of fluids and was reluctant to have a gel or bar, as I knew that would just gunk up my mouth, slowly but surly I climbed, there was zero wind and the heat was radiating off the ground. Finally I reached the top and was treated to a cool ocean breeze. I mustered all I had and ran/walked the last three miles downhill to find my wife with a car full of drinks waiting!

Twenty minutes and combination (not mix) of 100oz in Gatorade and chocolate milk later I was standing in the ocean cooling my feet!

Recovery was ok, I missed my early slot for today’s 14 miler so I had to go out mid morning, it was never going to be a fast run and it took a good two and half hours, again in the midday sun, around the local streets, taking a lesson from yesterday I carried cash and replened at several gas stations on fluids and ice. When I got home the thermometer in the garden said 96f. The average temperature over the last three years at AC100 has been mid seventies and so this really is good heat training, that being said the coolness of a 5:00am run definitely has it’s appeal!

Here’s the link to the Garmin Connect player and the photos from the day.