The Hills have Eyes!

'I' for Interval that is!

I am babying my left heel, it’s sore, like it’s bruised rather than it’s injured and so after Wednesday’s run I decided to push back Friday night’s long Tempo till the weekend, I had a Christmas party to go to as well which started at 6:00pm. Anyway Saturday came and went and so Sunday morning I was up and at them. It was feeling better but not 100% so I decided on hill intervals, why not; I had ridden them on my bike (see below) them on Thursday so it seemed fitting enough! 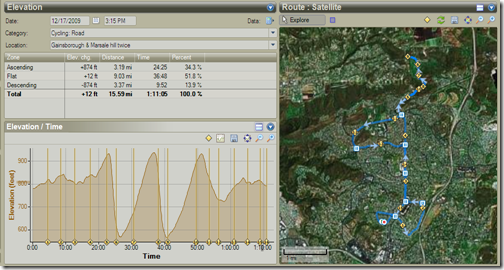 There’s this hill near where I live called Tarantula Hill; I am not sure why it’s called that other than the obvious! It’s about a mile away, well actually it’s 0.78 of a mile away, it’s more than a hill it looks kinda like a mini volcano, it’s small, sharp and steep; half a mile and about 200’ gain, there’s a service road that winds around it like a corkscrew. Three intervals I thought, and the end of the second one I was done, but I stripped of my second shirt and left it at the top…I’d have no excuses for not going back up when I got the bottom. 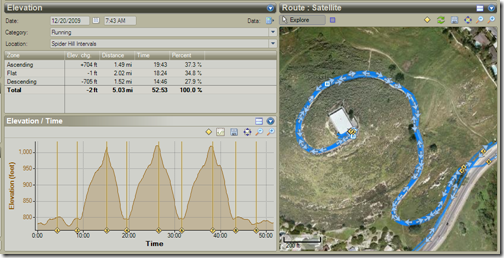 By the third ascent I really was done! I wound my way done and headed home! Here ends week 4 of training, for some reason I am feeling pretty beaten up, not enough sleep is a huge contributing factor to this, something to address in the new year, other than my ankle my recovering knee/quad is sore and I can feel a cold coming down the pipe – time to think myself healthy! Trust me this works…I don’t have time to be sick!

With Christmas looming I need to get out the last of my 2009 reviews, so watch out for them this coming week including POM, Smootie Selector, Tangerine, some Sugoi clothing and the Sufferfest’s Downward Spiral, talking of which I picked up this little pain-pill earlier today, is it bad that I like the pain!

Brett over at Zen and the Art of Triathlon is having a giveaway this week for three free copies…enter at your own risk!