Chrysalis is a departure from the usual Sufferfest format. It’s a workout specifically aimed at Triathletes and is based around a series of “Bricks” bike/run intervals with narrow transition time in between.

You still get the awesome footage that we have all come to love and hate but now you get footage of running, all of the race footage comes from Challenge Roth, one of nine of the Challenge-Family races and most likely the most well-known one; in July 2010 Chrissie Wellington defended her Challenge Roth title in Germany in a new “ironman-distance” (not Ironman as per WTC) world record time of 8:19:13, placing seventh overall and bettering her own record by more than 12 minutes. Anyway I digress! It does provide some great footage of household, well Triathlon focused, household names; Dirk Bockel, Caroline Steffen and, Yvonne Van Vlerken as well as some course and crowd views…this race is well supported!

Originally designed for someone who has a treadmill next to their bike trainer (I don’t) it also has been modified to allow you to run on the road off of the bike and that’s my review methodology. Additionally I used the TrainerRoad Version of this workout which obviously focuses only on the Bikes segments. To facilitate the ride/run I used my Garmin 500 on my bike set to AutoPause. My Garmin 910xt which would allow me to switch from Run to Bike and back. I also wrote out all the run workouts on PostIt notes which I would carry for each run segment, they are all different and too complex to remember!

After the modified 4 minute warm up I skipped the first transition and then hopped on my bike, for me transitions are a challenge as I wear no socks for cycling but do for running so it’s an additional challenge (no pun intended) especially as my feet warm up etc. The first bike section lasted another 17 minutes which included the bike warm up and the first Brick. The Bricks are a 4 x 8 minutes bike/4 minutes run, with a 30 seconds transition in between each time. Every single interval across the bikes and runs are built out from micro intervals including surging accelerations, steady state and climbing.Now because I ran on the road I cannot comment on the run footage but I assume it contains much the same in the form of directions and footage of well…people running! For my transitions I placed a chair next to my bike to make things easier per my sock issue! 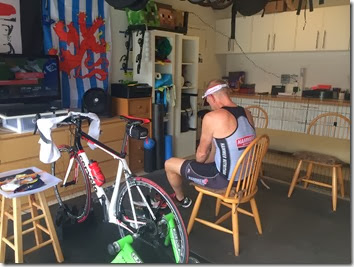 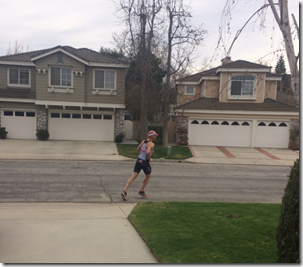 As usual you get the on screen prompts that provide you a Cadence, RPE, countdown clock and new for this video and “up/down” indicator which tells you what’s coming next up being more work and down being an ease off 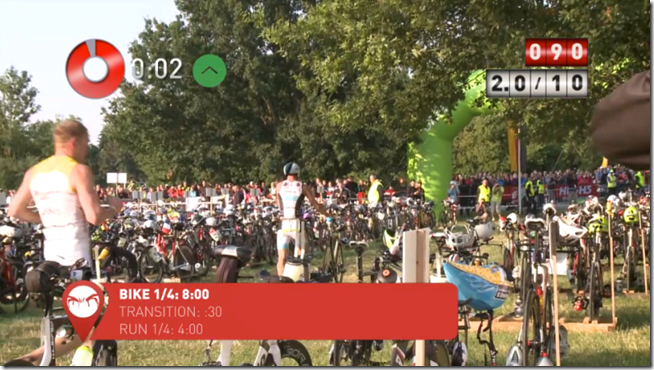 When using TrainerRoad and my Stages PM I simply followed the on screen power-line, of course there is no line for the run but you can see it was still picking up my heart rate as I ran in and out of my garage! These are the first two intervals and the warm up on TrainerRoad; 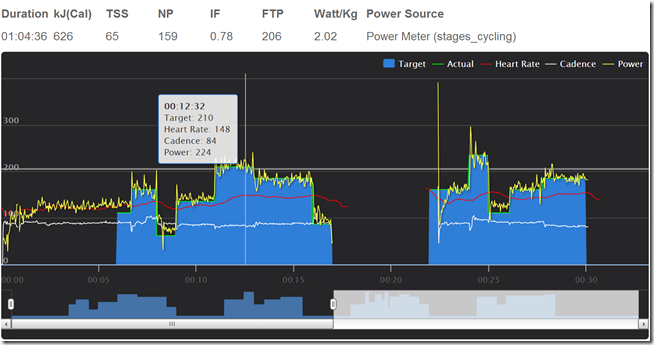 The intervals on the bike translate into the following zones and you can see the percentage of time spent in them to get a feel for the level of effort across this ride.

Because I was using two Garmins I was able to generate two files, this is the overall bike file from Strava, you can clearly see the transitions; 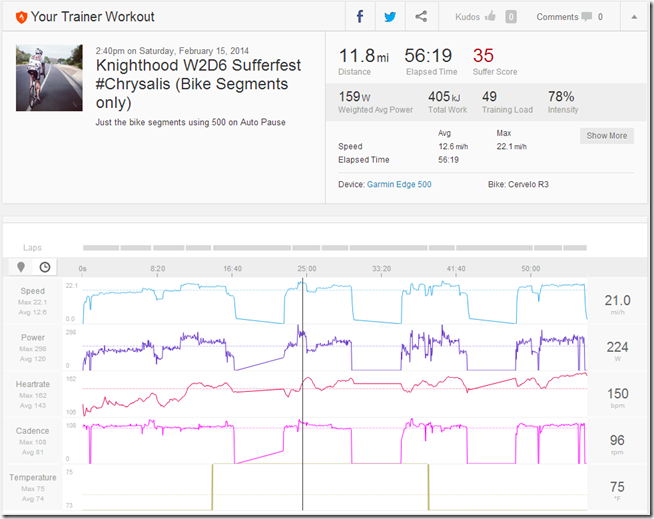 For the running I generated one file using 910xt but when uploaded it created multiple entries into everywhere I tried (Strava, GC, SportTracks) so it looks like this;

So to give you an idea this is one Brick segment; And this is a bike segment; 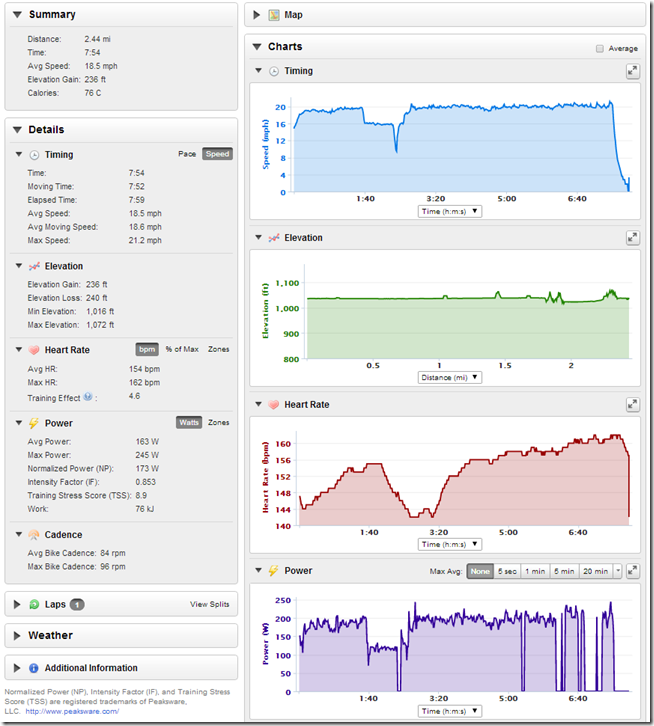 So enough of the all the screen shots, data and quantitative stuff, what about the qualitative info? Well the race footage is great, in the more than three years I have been using ‘fests the video quality has gotten better each time, this is clear in your face race footage that you would expect to see on the TV. The soundtrack is as usual kickass, a good mix of indie rock and techno, which is right in my ball park!

The workout was put together by Neal Henderson from Apex Coaching, the same sick minds folks who came up with ISLAGIATT and Violator…and yeah the same guy that coaches Taylor Phinney from Pro team BMC and head coach at the Boulder Center for Sports Medicine, Side note; here’s a link to an excellent article about data driven training he is quoted in.

The Bricks are hard, not impossible hard but they make you work, the micro intervals keep you engaged and focused on what’s going on, of course using TrainerRoad makes your life easier as the intensity is based on your FTP. As my running has not been anything to write home about this year I was interested to see what an my perceived levels of effort would turn out to be and pleasantly surprised that I was, albeit for a short distance, able to get my pace easily(ish) into the mid 6’s!

In total the video lasts just over an hour and it’s an hour of quality work, no junk miles here!

Need a teaser…here you go;

Chrysalis is available online now to download for $12.99, in a sport that is renowned for it’s expensive kit, this could be the best three Starbucks lattes you can miss!

This product was purchased (yeah sick I know). Other Sufferfest Reviews are available to read here.  If you have a product you’d like reviewed, contact me at quadrathon@gmail.com.