A quick round up from over the weekend. Friday my wife and I headed to the local Four Seasons Hotel for a his'n'her massage, some pool time and a general catch up without the kids, it was actually our Wedding Anniversary, well a day late, ten years! And although we had gone away earlier in the year while my in-laws were in town, under the heading of “we’ll never manage it on the actual day” well, we did. After a great massage, lunch by the indoor pool I headed off to the gym, I was scheduled for a 10 miler but after 5 I was dieing, the gym was so hot I looked and felt like I had run a marathon through Kuala Lumpur! The only downside to the day was the weather and having had the previous weekend well over 100 today it was grey and wet with the temperature getting to all of 65! 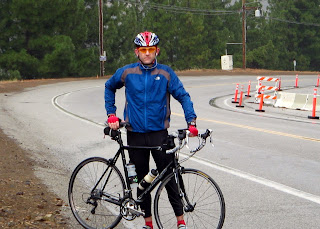 The weather continued in the same vein the next day and I set out on my bike early to try and beat the rain, not a chance. Fortunately I had switched out my windjacket for some Goretex but my legs and butt where well exposed (not in the biblical sense) but hey when you're wet; you're wet. I changed up the scenery this weekend and took a slightly different route, out through Kanan, gingerly crossing the bridge where I had buckled my wheel and then back up though Malibu Canyon, which is usually the down outbound leg, it made for an interesting ride seeing everything backwards as such, but by mile 35 I was feeling it, there seemed to be a disproportionate amount of up (ok and one really big down!), a light dinner the night before and a bagel for breakfast hadn’t really topped off my tank and in spite of having four Hammer gels, a bar and a couple of bottles of fluid (Perpetuem/Amino Vital) by the time

I got home ten miles later I was done in. Here's the MotionBased data. My bike was filthy and so I gave it a wash down and wax up and was finishing up just as my wife arrived back with the boys and so with the help of the eldest we went on to wash and wax both cars as, of course, by this time the sun had come out! Saturday night we had friends over for a BBQ, eaten inside as it really wasn’t that warm and the steak and beer slipped down a treat, although by 11pm I was so tired I was actually slipping down the chair myself!

Sunday day drifted by as they do and Sunday night I headed out for a 13 mile run, my legs were feeling a little tired and by mile 6 they were nagging, by mile 8 it was painful and by mile 11 I was stopping every quarter mile to give them some massage and generally swear at them, I would have kicked them in frustration but that would only be a really short term remedy! I dropped two ibuprofen en route but it was too little too late to make any real difference, I cut the run short by a quarter mile and went off into the corner to stretch and sulk. This knee business is really starting to get my goat and despite the cross and core (which I admit slipped a little last week) I am still having knee issues, not ITB, just knee. 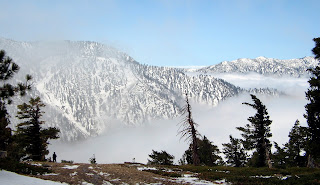 Monday was a rest day. I hung out with the boys all day, they're a little under the weather so having some quiet time was a good thing for everyone. My wife was out all day hiking up Mt Baldy, she was ambushed by the snow and was grateful to have worn her boots rather than hiking shoes! She didn’t get back to late, and in the evening I hit the foam roller for a session; pummeling quads, hams, calves and the like into some form of submission and compliance.

Tuesday night I headed out, unusually for me, I managed to get out before it was dark and I had a great 7.5 mile run, at an easy pace, but I focused a lot on listening to my knees; they're very chatty you know. I was concentrating on staying on the right pace and in the right heart rate zone and thinking about my form and footstrike, I am not a heavy heel striker, I think somewhere between heel and forefoot would be a good description, maybe if I have time (yeah right) I'll check out the chi or pose running methods. Of course my knee pain on Sunday could have been caused by just the cycling the day before…maybe? And that brings us up today. My other knee, not Sunday night's one is a little achy, see how annoying is that that they get together and change it up overnight, it's a conspiracy I tell you!

This week I have to mix up the training a bit, I have an organized bike ride on Saturday, I hope this picture was taken from a plane as either way if it is to top on a climb or decent it’s already giving me the heeby-jeebies. I am definitely up for the metric century (62 miles) and may do the 100 mile ride; maybe. So that means I’ll rest on Friday and combine Friday and Saturday’s cross training into one session; see that's nice and tidy.

Ok that’s it for now, catch (in deference to Frayed Laces) y'all later.
Posted by Stuart at 10:06 AM