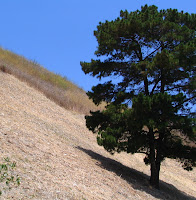 What a difference a month makes, this is the “after" photo taken 5 weeks after this one. Fire season is nearly upon us in and there has already been one fire in the Sierra Madre region, that’s not really local to us, it’s about 30 or so miles away but it affected Mt Wilson. All evacuation orders were lifted on April 30th and full containment was completed the weekend of May 3rd/4th. As of April 30th the fire had destroyed 584 acres (to put that into perspective an acre is about the size of a football field) of which 238 acres were on National Forest land, and the remaining 346 acres belonging to the City of Sierra Madre. This centre of the fire was around mile 75 on the AC100.

Residents who live near to open land, like we do, are required to cut back all the undergrowth for 30-50 yards around the perimeter of the property, hefty fines are levied by the city for lack of compliance, hence this is now the view from the back yard. Nearly all of the spring flowers are now turned into dry grasses and after such a mild winter, the high Sierra snowpack is only 67% of average, and with little or no rain since February it looks like it is going to be a long hot summer.