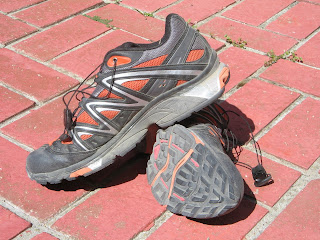 I took my new Salomon XT Wings for a spin on the local trails at the weekend and I have to say that I am impressed. When they first arrived I eagerly tried them on and felt them slip on my right heel, so I boxed them up and was ready to ship them back, it then dawned on me that I should try them with my running socks, so I spent the next 4 days wearing them about the house and doing all the usual things, I am fortunate enough that I virtually live in running shoes, the downside is that as soon as something new is on my feet it feels a bit odd. The retailer provided a 90 day money back warranty and suggested that I went for a run etc in them so I did.

Saturday I headed to the local trails, they’re not technical and vary between a dirt road and a what I would call double track, wide enough for two people, the terrain is a little hilly, more rolling actually and the surface is quite varied including; sand, rock, dirt and gravel road, being that this is Southern California mud is always a push, if you really want to see what I was running over have a look at this.

The first thing you’ll notice about the shoe is the asymmetrical lacing, it starts on one side rather than in the middle, this is designed in conjunction with the Kevlar laces to get an optimum fit and provide support throughout the shoe by way of the rather snazzy lightening strips, the laces are the pull type which when tight you tuck the toggle and excess cord under a flap on the tongue which is half sewn in. It’s a rather neat feature which, once gotten used to, works very well, and the snugness of the lacing system can be felt as it envelops your foot. The downside of the laces is that it will be tricky to hook gaiters to them; a simple 5c D ring sewn on would be really useful here. Moving down the shoe there is a toe guard which adds some protection against sharp or blunt things you might encounter on the trail, a lizard with a switchblade or a bag of nickels waiting to mug you for your shoes for example. Further down there is a rubber “mud guard” which is higher then the sole and creeps up the upper, as mentioned earlier I am not expecting to have to test this mud feature anytime soon. Talking of uppers, they are fabric and seem pretty breathable; I am not someone who is prone to hot feet, well only on the dance floor! But conversely they seem to let a lot of dust in; of course this could be residual dust from my washed socks but probably not, so be prepared for dusty toes. They come in a couple of colors, I choose the orange (called XGames orange?) due to my shy and retiring personality, there is also a more subdued Black/Silver version.

The inside the shoe is accommodating; the toe box is wide enough for me, and compares well to the Asics mentioned above or Kayanos which are my road shoe. I went a half size up compared to normal shoes. 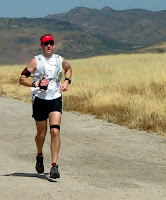 And so to where the rubber meets to road, literally. The shoe is designed to address pronation, there is some discussion I have read that running trails, where the surface and terrain can change ever few steps that a shoe with a pronation device, here a triple density sole, is redundant, but my chiropodist, who I have paid a large sum of money to for my orthotics would disagree and he spent a lot longer in school that I did! Anyway the triple density sole does make for a comfortable ride. There is no strike plate within the sole but the level of cushioning may be enough to overcome that...that's not an experiment I signed up for! There is a lot of information about how the design of the Agile Chassis System (ACS) integrates three components to increase runner efficiency: the skeleton, muscle and tendon, I am not going to get into that here though. Torsional rigidity (can I sound more technical?) is high, WT? you say, well it's how much to shoe will twist, this is more important on the trail where you are more likely to misplant your foot and roll you ankle. Finally the outsole is reasonably flexible and responsive, that is you don’t feel like you’re running in hiking boots. The weight of the shoe is on the high end in general at 14oz (size 11 and my measurement) but this is only 2oz more than Asics 2120 Trail shoes but the Wings feel a much more substantial shoe, of course they are new and my Asics have over 300 hard miles on them.

Now to the test run, initially they felt a little loose but as my feet warmed up they became snug and supportive, over the mixed terrain/surface they were very grippy, (this is a technical term) and I had no incidents of slipping on either the ups or the downs. On the flat the cushioning was really noticeable and there was plenty of spring in them. They felt a little heavy but I think that was me thinking about them more than the weight of the shoe. As mentioned the upper let in some dust, this on the face of it is no biggy but it could lead to blisters over a longer distance, this run was just less than six miles. 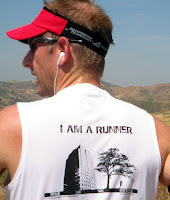 It was the first run since Leona Divide, I wasn’t running fast and was just out there enjoying myself, it's been a while since I was "out the back", the trailhead is a half mile from my house, see here for where town meets county, and it was glorious day in the early 70's. I did manage to take some video, which meant I ran up and down the same section of trail several times much to the amusement of some hikers, and some photos using the gorilla tripod, unfortunately my video editing software won’t let me upload it so the rather nifty “film”, used in the loosest sense of the word, remains locked in the vault until I can figure it out and at face value life is too short! I did manage to get a couple of decent photos though, yeah call me vain but who doesn't want some decent pictures of themself!

So overall early days but compared to all the other shoes that I have tried; Brooks Cascade; too flat, Merrell Overdrive I; uncomfortable outsole, Merrell Overdrive II tight toebox, Vasque Velocity; too stiff, Montrail Hardrock; too stiff and too narrow, Asics 2130 Trail; tight toebox and a few others whose name escapes me, these are a comfortable fit and ride. Let me put a hundred miles on them or so and I’ll give you an update. Oh yes one last thing; they’re $120 a pair so I am wide open to some blogger love!