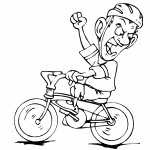 This weeks “Take it and run Thursday” from Runners Lounge is about cross training, no not running about in a state of angriness that’s another post altogether but the oft acknowledged but then completely overlooked art of complimentary training to your running. Now I confess that my history in this field is somewhat accidental, without any real effort I found myself cross training and now with hindsight I can see the benefits that it brought to my sport.

While I have run on and off for years I have also been a frequent cyclist, either on the road or on the trails, in fact for four years or so my mountain bike and I traveled many of the trails in the Santa Monica mountains that I now find my self running. In between cycling I would run and so without any real conscious effort on my part I was cross training. Looking back, apart from the injuries caused by impact; head on rock, knee on bush, hands on trail and the like; I was actually “injury” free for that whole period of time. Last year when I was down with ITB issues my PT was happy for me to jump on my bike and put in the miles of course as I came out of the injury pipeline into recovery biking fell by the wayside and running took the main stage again and like a dolt I forgot a lot of the important lessons that I had learned. Well if the definition of an idiot is someone who is doomed to repeat their mistakes over and over then that was me as I went down in March with ITB problems…again. This time I was able to manage the problem and stop it in its tracks allowing me to complete my 'A' race for the spring but it was a close call.

Now there are not too many training programs that take you to 50 miles and beyond as a runner and so when I found myself constructing mine for my fall 'A' race I made sure to include a large proportion of miles dedicated to cross training, in my instance cycling and core body workouts which addresses not only the core but many of the joints and stabilizing muscles, I actually have a ratio of around 1:1.3 run miles to bike miles for the plan and I work on my core 6 days a week

For me there are two benefits; mental and physical. Mentally; if you do enough of one thing you’ll get bored, a little variation keeps the blade sharp and interest level high, additionally the range on a bike is so much more than running; at least for now. Physically; the benefit to me in cycling is the balance it provides in developing the muscle groups in my legs. It’s probably incorrect to state that these muscles are running and those are cycling as they are all interconnected and work in conjunction with each other and additionally there are muscles in the core and upper body that are used in both sports but here we are talking about everything below the waist. The reality is that the main muscle groups used when running are your calves, hamstrings and glutes; with the hamstrings doing most of the work. If you think about it the hamstrings, calves and glutes are on the back of your leg, that’s because the motion of running is propelling or pushing. In addition to the above groups when you hop on your bike you start to incorporate the largest muscles in your legs, in fact they are the largest in you body; your quadriceps. The quads come into play when cycling as you are also pulling, they don’t play a role in running until you start running hills, this is when they come into their own, you may have heard people talking about their quads “being mashed” after a long downhill stretch taken at speed, so ignore them at your peril.

Now in addition to the main muscle groups in the legs there are lots of smaller interconnected stabilizing muscles that hold things together (like your hips, knees and ankles) as well as the ligaments and tendons etc that all play an important role and all need to have some attention levied at them; think balance and wobble boards, stretching plyometrics, core strengthening exercises and the like. Check out some of the books in the widget thing in the sidebar. While I profess to be no expert and this is all based on my experience and my second hand knowledge the benefits of cross training are a pretty well accepted standard, just look at the FIRST training program. You may want to know why I choose cycling over swimming which is a great alternative, the answer is simple I have the aquatic characteristics of a large stone!

The message here is run all the time and your will develop all the things that help you run and ignore all the rest. Cycle all the time, ditto. Mixing it up actually benefits you overall training, ignore it and you may end up injured, sidelined and just cross!
Posted by Stuart at 7:09 AM

Email ThisBlogThis!Share to TwitterShare to FacebookShare to Pinterest
Labels: Blogs I read, Cross Training, Getting fitter