Usually things come in halves, this race came in roughly quarters, three on the front end and one on the back end…and so on with the show! 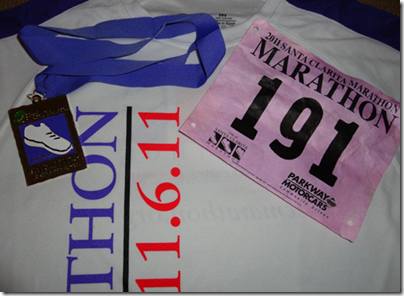 Pouring rain, not LA Marathon 2010 pouring but nevertheless wet enough to merit a NorthFace jacket for at least the first two hours of the race accompanied me as I wound my way along, up, over, back, down, through and around Santa Clarita. Ironically the rain didn’t make it cold, it was the wind that blew the rain away that then made things cold, but wasn’t the weather that killed my race.

Nor was it my nutrition or hydration, in fact I was so well hydrated that I stopped to pee, although it did cross my mind to just go while moving but I avoided that. I am not sure but I do think I took on several liters through absorbtion! 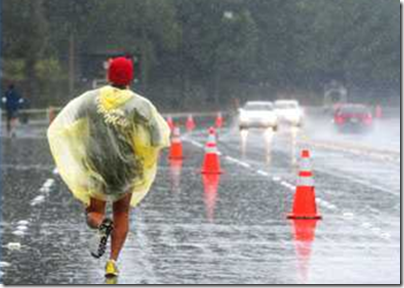 Miles 1-8 in 57: 03 an average 7:07 pace; no problems, my pace was solid, it varied according the terrain, which was deceptively rolling. 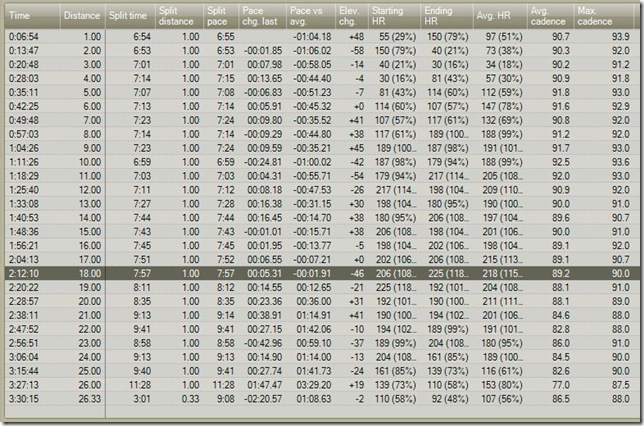 Then BOOM! the wall…I plugged away for another couple of miles to 22 and with that I was toast!

So what went wrong, well let’s talk about that, truth is I went out a bit fast, but only a bit, yeah the weather was bad, but not that bad and maybe an extra gel might have helped…maybe.

The truth is, as best I can tell, is my long runs were not as many or as long as they should have been, I did three 20 milers, one slow to cover the distance and two at not race pace (one was +20 and the other +15). The success I had with the Half Marathon training had me training at either race pace or race distance albeit that was my own deviation from the plan but one that paid off and I just didn’t have that this time around, I personally believe that at least one more 20 ideally a 22 miler and a 23/24 was needed, the bridge from 20 to 26 at the pace I want/need is just to0 big a gap to bridge without training runs.

Now the question is what to do in the Spring (or sooner) now I know (think I know) what the problem was! Surf City is an option in early February, given that potentially my first Tri is not until March…ugh well right now growing my legs back in time for my 50K in two weeks is my priority!

That's three PRs out of the last three races so I must be doing something right!