This weekend I passed the 100 mile mark on my new Peregrine 5 Trail shoes. With that in mind now seemed a like a good time to write up a review.

As mentioned earlier this month I am very fortunate to have a relationship with Saucony which allows me to run in and then review their shoes. I reviewed the first and fourth versions of the Peregrines here and here respectively. My 100 miles has been made up of a 50k race, multiple long runs on local trails in both the wet and the dry, a big training weekend in Santa Barbara and a few short sharp hill sessions…in short a bit of everything So without further ado here is the review. 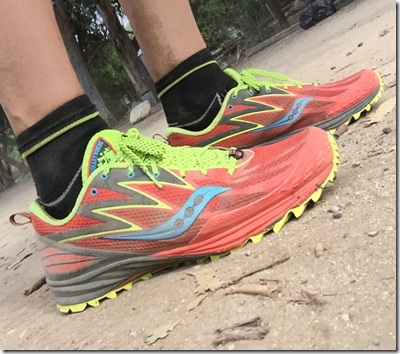 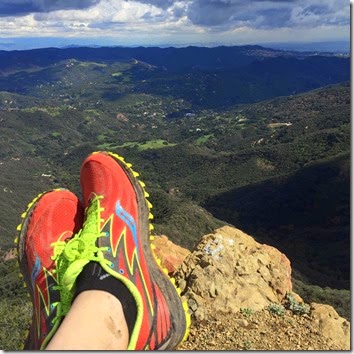 The Peregrine is Saucony’s lightest trail shoe. It has a minimal drop of 4mm. Specifically the stack heights are Heel: 21.5mm and Forefoot Height: 17.5mm. The outsole remains unchanged when compared the the 4. There is still an effective rock plate to help you over that harder terrain. The sole also has drainage holes. This is something that I have not had to worry about in recent years however Southern California actually has had a winter and several long wet runs and a couple of river crossings have tested this feature. The drainage works well and allows the shoe to drain quickly and avoids that “squelchy” feeling when you’re running with a shoe full of water. The insole feels like it has undergone some improvements and is a much more cushioned ride when compared the Peregrine 4. 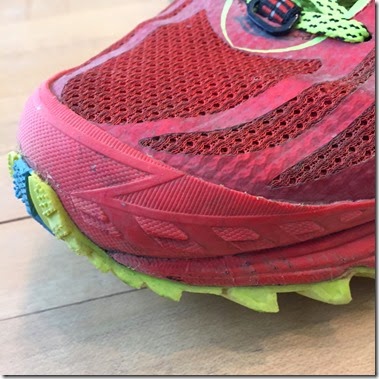 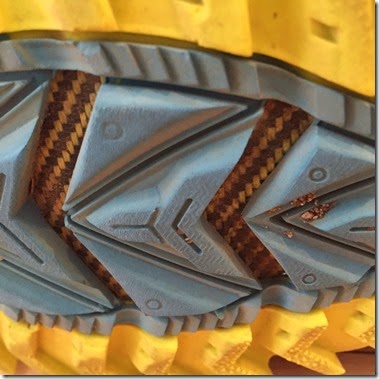 The upper retains the Flexfilm saddle overlays. These add the structure but allows for plenty of flexibility and breathability. Overall there is less Flexfilm than before and the 5s have some more solid overlays, noticeably the black/yellow “zig zag”. The heel counter is solid although the structuring has been reversed. This is not noticeable in any real way. The collar has more padding than the prior version, this created no hotspots. New this version is a heel loop. I don’t usually wear gaiters but this may cause some folks an issue. There is the usual gaiter loop at the end of the laces. The toecap has been improved and now features a heavy duty rubberized version. This is great as if, like me, you barely lift your feet and you’re sick of kicking rocks! The shoe lining is now fitted with Run-Dry, this is the new naming configuration that Saucony have adopted, the others being Run-Shield or in shoe parlance GTX (waterproof) and Run-Warm (insulated) the latter only applying to clothing.

One thing that is missing is the loop on the shoe tongue that your laces go through. It’s one of those innocuous things that you would never think about until you see it’s not there and as a result the tongue slips to one side. I had no problem with this but it’s worth pointing out.

The shoe weighs in 6 grams heavier than the prior version, 307g vs. 301g (size 11) although that can probably be written off to the amount of dust inside! Both of these are heavier the original Peregrines which were 255g. 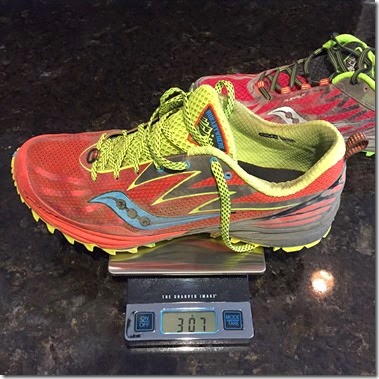 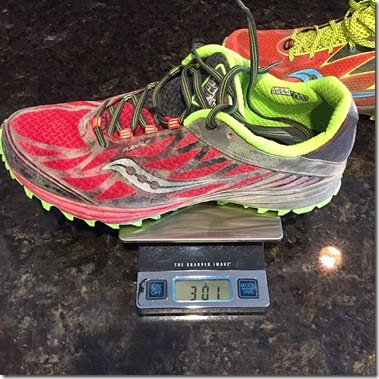 In terms of colors there are available in an orange/yellow or black/gold colorway for men and purple/red or black/lime for women. They retail for $110 from Saucony and pretty much anywhere you can buy them. If that’s too steep consider the Peregrine 4s, you can read my review here and you’ll find them online for around $80 a pair.

Overall the biggest difference between there and the previous iteration is a much more cushioned ride. Not that the 4s are harsh or that the 5s are spongy but just that these feel easier on the feet. The trails I have been covering over the last few weekend have been rocky and hard with a fair amount of technical single track. I have not had any issues with grip or slipping and no problems with blisters and the like. As for having yucky black toenails…well that’s a side benefit of being a trail runner!

These shoes were provided free of charge by the good folks at Saucony. See previous gear reviews in the sidebar on the right. If you have a product you’d like reviewed, contact me at quadrathon@gmail.com.