So having set myself up with the target of pool yardage and bike mileage it is only fair that I report on my progress…blogging etc tends to keep you honest that way!

My week shook out pretty well, I was in the pool at 5:00 Tuesday, a mile later I got out. Thursday should have been the same but the fly in the ointment was my wife having a last minute trip to San Francisco which stopped me from hitting the pool in the morning so I dashed over at lunchtime for a quick 1000 yards. 2750 done total so far! Most of my swimming is continuous and with a Pull Buoy I am having issues with heavy legs which I am trying to address but I am doing drills to help my glide and catch and other swimming jargon that, like the water, is going over my head! A friend has offered to watch some video of me and suggested I take some lessons to reset the basics that I know. I have bumped into another swimmer at the pool several times who shares the penchant for the early mornings and they have given me several pointers which have helped as well. So come Saturday I was left with 2250 and that was always going to be a stretch. I managed 2000 yards Saturday morning so I ended the week with 4750; close but no cigar! 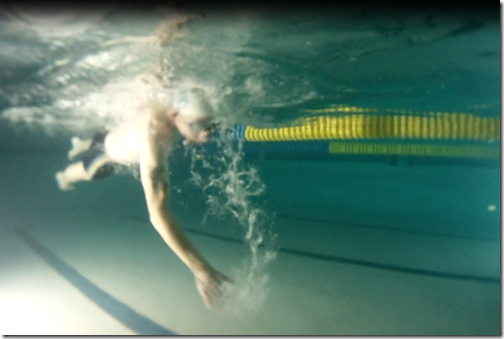 Heavy legs sinking down and apparently straight arms is a big no no too!

The bike was a bit easier and I set myself up on the trainer three mornings and one evening riding three Sufferfest rides and also a CycleFilm DVD which are all on sale now! Check them out here! By the time the weekend rolled around I was left with 59 miles to make my goal of 125.  As is the usual modus operandi, this would mean an early start on Sunday morning so a good 4 hour ride would not eat into to too much of the day. I was out the door and in the saddle by 7:00am a little later than planed and it was freezing, layers of Pearl Izumi Thermals barely kept the cold at bay and the only break I got allowed my to remove my long fingered gloves and uncover my ears…that’s it! 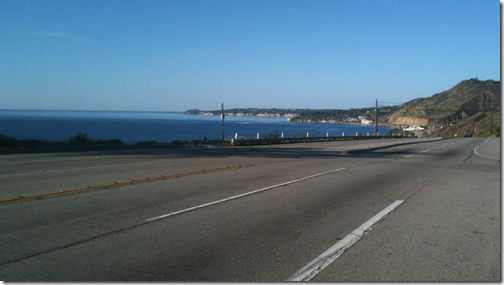 Pacific Coast Highway…a favorite for cyclists, can’t think why, the view is terrible!

The plan was to ride through one of the canyons to Pacific Coast Highway head north and then sweep around and back home, this would leave a long hard climb around the 50 mile mark, I have only ridden it once well over a year ago and with a triple!

The ride was uneventful, the way I like them and the climb proved a challenge to say the least but I huffed and puffed up it and was very happy to get to the top with no dabbing…or flipping over backwards!

Totals for the week then:

One week done…four to go!