This week was always going to be a challenge, three days on training courses, two of which were out of town. I booked a hotel that had a pool, no one could answer when I asked about the size, the photo of course was very deceiving and the pool was at best 10 yards long! Fortunately there was a 24Hour Fitness next door which had an outside pool, chilly; yes, but needs must, although the pouring rain, thunder and lightening was a little off putting thankfully it had stopped by the time I got there! It was a but chilly but once I got going it was all good and I even went there after the second day to avoid sitting in the “Orange Crush” as the rush hour traffic is called.

I also had a swimming lesson this week, it just made sense and there is a local school, if fact my sons go to it, and I have another next week, lessons learned:

So that was what I have been focusing on…so far so good, kinda! 5250 yards for the week!

On the bike front I rode one Sufferfest in addition to the Threshold test and another TrainerRoad ride. That left a chunk of mile needed for the weekend. So this morning I headed out looking for a bit of everything, rollers, flat, descents and climbing oh and of course miles! Fortunately for me the Santa Monica mountains are criss-crossed with roads which provide the ups and downs and the Pacific Coast Highway is a great place to get on the drops and just dig in.

So a feather short of 5 hours later, including time taken to stop and strip off at a porta-john, (tights and cycling bib take a little wrangling!) I was done with a metric century on the clock, (62 miles). 20 miles of rollers, a 3 mile 1000' decent followed by 25 miles of almost flat along PCH and then a ball busting 1850' elevation gain over 10 miles before a hair raising roll down the other side (some parts are a -10% incline) and back home! Overall I felt solid but I can be stronger on the climbs but my real weakness is going down...nerves from big crash years still ago plague me! Upon reviewing the data I over half the ride was in Zones 1 and 2 which is good. 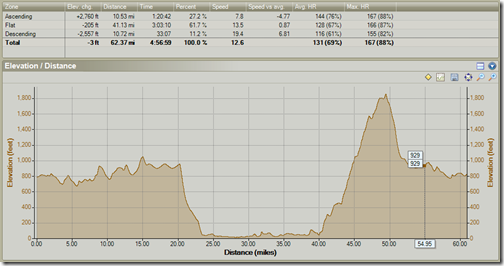 Obviously all the climbing kills the average pace for the ride but further inspection on the flats reveals an average pace north of 18mph, so I am getting closer to my goal of 20mph, although I was drafting a wee bit off of speedy carbon chick on a TT bike for a mile or two! This coming week I should receive some trial saddles for my Cannondale Slice and I’m hoping the speed will transfer over from my Cervelo…we’ll find out next weekend!

So with 110 miles on the bike here endeth the week!