Well this turned into a big week! As mentioned last week I was able to drop a commute to work in the mix on my day off (Friday) and then had a double on Sunday, so before I get ahead of myself this is how the week shook out;

Tuesday;  Kearsarge. Nothing to report on this one, after a day off it was all very doable. 6 sets of Anaerobic Power repeats ranging from 120-150% FTP lasting either 18 or 24 seconds but both in the 20-second sprint ballpark. Recoveries between intervals are about 1 to 1.5 minutes while your downtime between sets is about 4 minutes in all cases. Had an easy 3 mile run in the evening. GC Data.

Thursday; Smith. All work on this ride, started to lose it on the 5th interval and held the 6th together, struggled to ride a good gearing, 80-82rpm held the power, the next gear down put my at 92rpm which I couldn't hold for the power. 6x10min sets very close to FTP; 3 minutes rest between intervals. Another 3 mile run in the evening a bit quicker than Tuesday. GC Data.

Friday; commute to and from work adds an 28 miles to week and an extra 2000 of elevation gain.

Saturday; North Maggie. Went out too fast and fell off at the end. 5x10-minute Power Steps each beginning with 5 minutes between 90-95% FTP followed immediately by 5 minutes of 1-3% FTP steps which top out at 112%; 5 minutes of rest between each interval. Not a 100% believer in the totals for this as I cranked out 30 miles in 1:34:12, I didn’t change the resistance on the trainer but this seems super-fast to me! This was after pretty much being on my feet all morning at a kid’s Track Meet. GC Data.

Sunday; off the Trainer and onto the road and trails; the first ride was 10 dusty miles on my Mountain Bike pacing Becca as she trains for a local trail Half Marathon, it was super-hot, pushing 90f in the canyons. After the rain of last week the trail was pretty rutted and a lot of the dust covered rocks were more slick. Not surprisingly my MTB skills are very poor, I feel strong enough to get up the climbs but I lack the technical skills that are only acquired spending time on the trails. Best news of the day…I only fell off once, as my wheels slipped out from under me and I very delicately landed in a bush! GC Data. 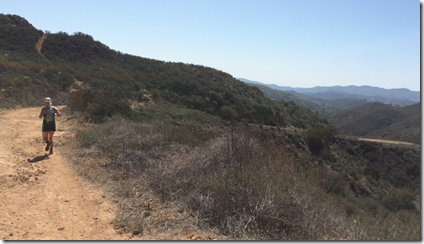 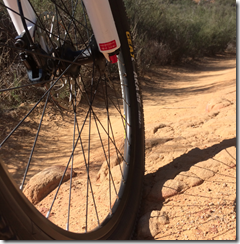 After a short pause to let the temperature cool off some we set out for a 2 hour road ride and instead of heading to the Rock Store we opted for a slingshot out-and-back from the house to save time. The ride itself has rolling climbs to the turnaround and the return ride is always a bit quicker. Neither of us had practiced the best fueling strategy and a stop at the last Gas Station on the way home to share a fully leaded ice cold coke got us up the last climb and I even snagged a couple of Strava PRs on the way home. There are so many cyclists in the area that it will be a cold day in hell when I get a KOM on anything that doesn’t start on my driveway! GC Data.

Other notable items of the week.

So the Weekly/Total Training totals are looking like this;