A pretty vanilla week. Somewhat of three bears week, with two weeks ago being overcooked with 175 miles Papa Bear, last week being a bit undercooked with 121 miles Momma Bear, this week was pretty much in the middle with 147 and shut the front door 3 of those miles were running!!! Baby Bear This is the penultimate week of training so I was glad to have a solid week, it also closed out the month and the quarter so it was a week with lots of closings.

Here is how things shook out;

Tuesday; Lone Pine. Dialed back to 92% as back is still sore. This was a nice solid ride.6x10-minute intervals in the Threshold power level at 95-99% FTP with 3-minute recoveries between intervals. Focused on form on the bike, sitting still, "scraping shoes" etc. GC Data.

Wednesday; Pyramidal. Very pleased with this, some work but well within myself. 40 minutes of Tempo with varying intensity every 5 minutes. GC Data.

Saturday; North Maggie. Today was a FreeRide so as Sunday is on the road I just swapped them around. 5x10-minute Power Steps each beginning with 5 minutes between 90-95% FTP followed immediately by 5 minutes of 1-3% FTP steps which top out at 112%; 5 minutes of rest between each interval. Dialed intensity back to 95%, GC Data.

Sunday; Hidden Valley, WLV loop. Nice solid ride with a bit of everything, climbs (2800' of gain), flats and drops. Felt strong, hammered some of it and eased off in some. Followed this with a three mile run in the new Saucony Virrata 2s. I was chasing Becca for a bit and was pleased with the pace given my lack of running. Finished it off with a cold Mexican Coke! 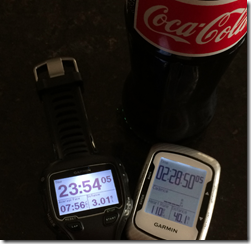 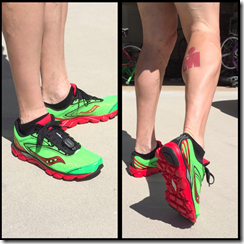 In terms of the month as suspected I broke the 600 mile mark, this is a new high for me even compared to Ironman training back in 2012 when I had bike week (which was 190 miles) I only topped out at 476 and when training for the Tour De Big Bear last year I maxed at 498 so this is a big up in mileage from then.

That being said this plan is very consistent with 4 x 90 minute rides and a 60 minute ride per week and and then whatever I did on a Sunday.

For the quarter, well the numbers speak for themselves. This obviously reflects the two weeks off in January after the bike crash. That being said had I not crashed my training would have looked very different as I would have continued on the Ironman St George 70.3 plan, so there would have been a lot more running and swimming of course! Either way I am pleased with the consistency.

This is the last week of the scheduled plan. I have decide to skip Saturday’s ride; the only ride which I have missed since starting. This will give me an extra day of rest before L’Etape du California on Sunday.

My best estimate is that I will just break 70 hours of training over the 9 weeks and hit 1100 miles. I will write up a review on the plan next week!